Your chance to see Maxine refighting the past 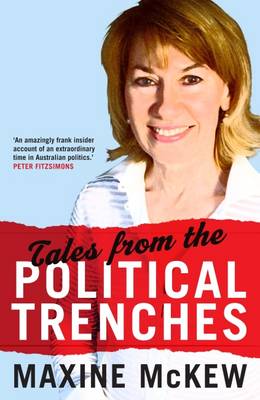 Paperchain Bookstore and Melbourne University Publishing invite you to hear:

Maxine McKew, author of Tales From The Political Trenches, in conversation with author and journalist Laura Tingle.

Julia Gillard was impatient for the prime ministership, and either worked with or allowed others to manufacture a sense of crisis around Rudd’s leadership. She then cut down a prime minister in his first term and tried to pretend it was in the national interest to do so. Since then, she has been the architect of her own misfortune. In Tales from the Political Trenches Maxine McKew counters the view that Julia Gillard was a reluctant deputy who was forced to move against a chaotic and dysfunctional Kevin Rudd and offers a different version of events. Her story is an intimate account of one of the most tumultuous periods in Australian politics, as well as a tale of personal change. She brings a reporter’s eye and an insider’s knowledge to a story that has caused despair among Labor supporters and produced disillusionment among the electorate. After winning a spectacular victory against Prime Minister John Howard in 2007, McKew was one of the many casualties of the disastrous 2010 election campaign, when Labor was left clinging to the wreckage and forced into minority government. Still dealing with her own disappointments in a political career cut short by the machinations of her own party, and with more questions than answers, McKew has spent the past year talking to her colleagues in an effort to understand what went wrong. Tales from the Political Trenches is a must-read for those who have followed the events of the past few years and are still asking, ‘what the hell happened?’

Maxine McKew is a Vice Chancellor’s Fellow at the University of Melbourne. She also works as an advisor on education to the not-for-profit group Social Ventures Australia, is Chair of Playgroup Australia and a member of the board of Per Capita. At the 2007 federal election Maxine McKew wrote herself into Australian political history as only the second candidate ever to beat a prime minister in his own seat. She was immediately elevated to the executive and served as Parliamentary Secretary for Early Childhood, and later as Parliamentary Secretary for Infrastructure and Regional Development. Before making the switch to politics, Maxine had a thirty-year career as a broadcast and print journalist. As host of Lateline and part-time anchor of 7.30 Report she earned a reputation as one of the country’s most authoritative interviewers. Her television reporting has been recognised by her peers with both Logie and Walkley awards for broadcast excellence, while her work for the Bulletin saw her secure the Magazine Publisher’s Award for Columnist of the Year. A sought-after speaker and facilitator, Maxine is represented by Claxton Communications and is involved in a range of voluntary activities.

Luke Barnes - 8 minutes ago
At their heart, Labor are anti-business. Barr’s treatment of the business community during his lockdown has been appalling. View
Michael Jaz - 1 hour ago
The ACT does have a roadmap View
Vlad Dias - 9 hours ago
End the lockdown now! Let people provide for themselves with dignity! Who wants to beg for government crumbles? How can it be... View
Property 2

Heidi Kark - 2 hours ago
Simon Trommestad I believe your example to be logically consistent with what I’ve said above- In that the death would still... View
Jonny Ivan - 5 hours ago
write this year off View
Joanne Mitchell - 7 hours ago
David Warwick and why did they remove the mask mandate two weeks before the first case while Sydney’s numbers were still cl... View
News 47

Claire Cat - 10 hours ago
Jo Hann I agree wholeheartedly X and it's for those reasons our family has chosen to opt out of distance learning and focus o... View
Jo Hann - 10 hours ago
Claire Cat at 6 years old, learning should be entirely play based. In the best performing countries in the world (with regard... View
News 20

Alison Jones - 11 hours ago
I appreciate Mr Barr's approach of asking all of us who are 12 years or older to get vaccinated. I also appreciate him not pr... View
Karo Ki - 11 hours ago
Fran Gray oh great, i didnt know that. Thanks. :) View
Daniel Duncan - 11 hours ago
No to Mandates. No to Vax passports.. let us free View
Food & Wine 8

Lucie Hassall - 11 hours ago
Therese Malone thought you might be interested in this xo View
Sharon Morris - 12 hours ago
So happy to read this and look forward to visiting! View
Food & Wine 10

NSW Premier Gladys Berejiklian will be missing from our screens at 11:00 am today, and some may think that's a...
News 28

@The_RiotACT @The_RiotACT
Bywong is 30 minutes from Canberra but 68 Bohmers Lane is a million miles from care, set on seven acres and wonderfully updated, this home will set your imagination free https://t.co/JbDJ600KJR (2 hours ago)

@The_RiotACT @The_RiotACT
Looking for something to stimulate your brain during #lockdown? There are many online short courses available, from bird appreciation and understanding wine, to a free salary negotiation course from @Harvard https://t.co/8KRfOvage4 (12 hours ago)