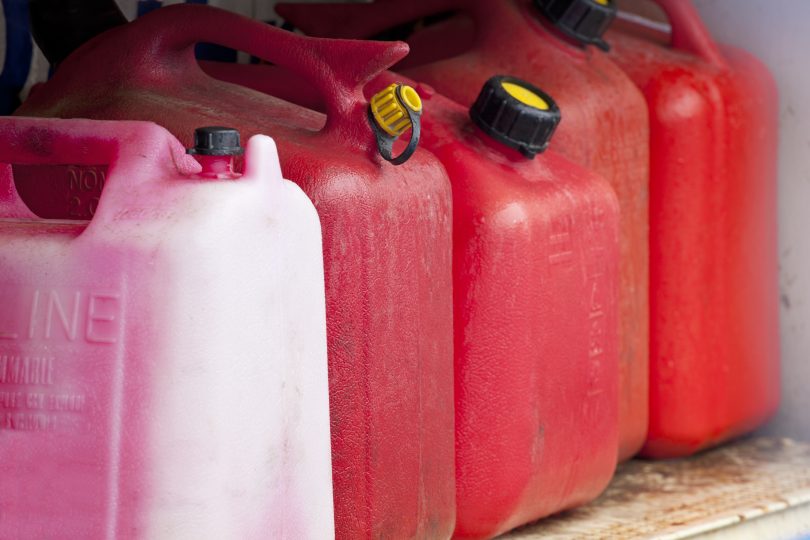 As fuel prices remain high, is the best option really to stock up and keep it in storage? Photo: File.

As he walked through his unit building’s basement car park one day, Angus* spotted something which concerned him immensely – close to 100 litres of fuel being stored in jerry cans.

His immediate thought was of the regular fire alarms – both real and false – which building residents have become accustomed to and of experiences in the past where fires have taken place in the complex.

“One of the units was burnt out after a fire and others were smoke damaged,” he said.

It’s not that Angus doesn’t understand why someone would be storing fuel at the moment given the uncertainty around prices at the pump. It’s that he doesn’t think there should be quite that much in storage in a building basement like that.

So he went on a super sleuth hunt to find out whether there were any rules governing how much fuel can be “safely” stored in the ACT.

What he found – or didn’t find – shocked him. There don’t seem to be any local guidelines at all.

Australian guidelines seem to set out that the maximum amount of fuel that can be transported is 250 litres. But that still doesn’t clear up how much someone could ostensibly keep in storage.

“The biggest issue I have is that if there are no rules about how much you can store – it’s only going to be a matter of time until there’s a massive accident in Canberra,” he said.

There is some information online – but it’s dated 2010 – about storing fuel in NSW. The rules seem to be that 5 litres was the most you could store in your house and 25 litres in a garage as long as the wall between that and the house was fire-rated.

Region Media approached multiple local agencies to find out if they could provide any advice.

The Emergency Services Agency said they didn’t know but passed on a request for comment to Access Canberra, saying they would be the people in charge of that.

But Access Canberra also didn’t have any information. They said WorkSafe would know.

WorkSafe ACT provided the following comment: “the main hazards associated with fuel storage, or the storage of any flammable liquids, are outlined in the Guide published by Safe Work Australia – Storage of flammable liquids.

But Angus doesn’t think it is enough.

“We should have some clear regulations on the matter,” he said.

*Name has been changed upon request.

Are they stored in the correct containers or in plastic bags?

Even worse when not stored in containers meant for petrol

I don’t know the law but it feels like common sense. I’d be alarmed as it’s very risky. We have ice addicts in our units. 1 Appartement. They destroy everything. I bet they would steal this fuel and end up lighting some in the garage.

As a former firefighter, this is actually a serious concern. I know it’s called Work Health and Safety, but incidents don’t just happen at the work place. Guy’s not being soft, he’s being smart. Wish more people were.

The answer is in the Unit’s rules, managed by the Body Corporate/Management Committee.

No fuel in the basement – should be simple to pass a Unit rule. And safeguard everyone from a dangerous practice.

No riskier than having an EV parked in the same area and there are no regulations for them.

Ha, you just can’t help yourself, can you.

Even when presented with a clear safety risk solely related to fossil fuels and your precious ICE vehicles you try to make it about EVs.

“No riskier than having an EV parked in the same area”
Garbage, CR, and you know it because it has been shown here from real world data several times before.
If you wish to continue to look like a bit of a dill, it is not my place to prevent you. Facts are another matter.

Wow get over it! It’s a few jerry cans! What about the 100 cars parked in there with fuel in the tanks if there is a fire!!

Quentin Ng try putting yourself in his shoes

The storage of flammable liquids is regulated through Australian standard as1940 called up by the Dangerous Substances Act, however it is only relevant to workplaces. There is no restriction to the storage of flammable liquids in residential premises, however, where units are concerned that can be dealt with by adopting a bylaw through the strata body corporate. There is more than one way to skin a cat……

Domenic Fabbo out come the WorkCover hat hahahaha…good advice thou!

Charlie Karmenu Flask a bit of that and life experience, we become a little bit wiser as we get older, as you know…..

Domenic Fabbo yes, an update of the Rules for the complex will be needed. If they want (relatively) quick action, the Executive Committee will need to call a special meeting to propose an amendment. Might take a month before the amendments can be registered with ACAT.

“*Name has been changed upon request.” I’m guessing it’s Karen.

Right next to the toilet paper..