from a whole of ACT Govt post – I cant believe Riotact missed this event, I want Wayne on my bus!

The 2006 National Bus Roadeo was hosted by ACTION on Sunday at the Transport Industries Skills Centre. The Roadeo is a competition of driving skill and accuracy. Bus operators came from across Australia and New Zealand to compete. Bus roadeos have been conducted in the USA and Canada for many years, with Australia’s first national bus rodeo commencing in 1991. This is the second time ACTION has hosted the event, previously hosting it in 1997.

The course included obstacles which drivers must avoid and steel plates on the pavement which must be touched by the bus wheels. Competitors were given two attempts at the course, with penalty points being accrued if obstacles are touched or if any of the steel plates are not touched.

Wayne competed against 17 other entrants from around Australia and New Zealand to take the winning prize. Well done, Wayne!!!!!

UPDATED: Bighead has sent in a picture from the Busman’s Ball which followed the Roadeo and featured ACTION’s new ticket inspector (HAW HAW HAW) 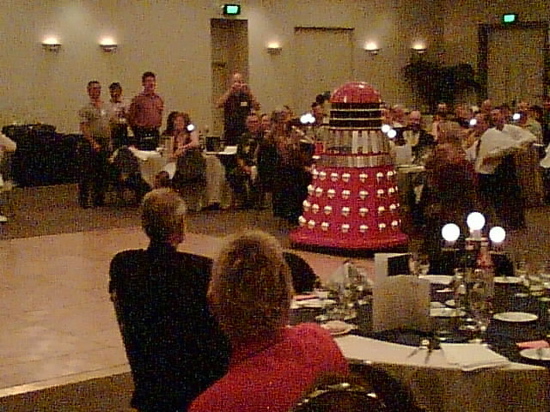 oh you love it still, admit it snahon.

yep okay… it was just the guy from all creatures great and small – he wasn’t a doctor who. I think I must have made some strange association between the two when I was kid. DAMN.

that doesn’t sound right. i have probably gotten myself all confused (that happens a lot)

Dunno what is scarier – they cost more to make than the value of your car or that you evidently know quite alot about something I can recall watching before my age reached double digits. 🙂

While the BBC apparently does not recommend fans build their own Daleks, it doesn’t mind endorsing those made by http://www.thisplanetearth.co.uk (I’d do one of those fancy link things if I knew how, maybe JB will help me out here). There are also some rather tantalising photos of owners INSIDE their Daleks – think of the fun you could have down at the local shops with that. I’d just like to point out that a standard Dalek costs more than I paid for my car. Just saying.

That would be Peter Davidson AD….

So, when do we get out the black clothing and beanies and steal the dalek?

I want two daleks – but only if they’re both hot!

Someone find out where they got the dalek from and how we can get it! Its on my christmas list.

I would also like to indicate my desire for a dalek.

okay with bigheads help we should steal the dalek. Then we can share it.

because I am pretty sure I was named after that actor who played the doctor who was also in all creature great an small, I should probably get the most time with it.. but I will share it

Yeah, I always used to wonder how daleks got to fall out of windows or off the ramparts of ancient castles.

does the dalek require deployment of a disability access ramp or is it one of the unfeasable new floating daleks (that I find incredulous) I mean really, how is the Doctor to bring his superior intellect to bear now? gone are the days when brains prevailed over brawn – ” oh no – DALEKS! – quick – go up stairs, thatll fix ’em”
I also want the dalek

I want a dalek too!

not that i know of, I shouldve only wished, sorry bout the crap quality froim the phone, Ill have to take my camera with me again 😀

Did a naked chick pop out of the Dalek?

yeah they finished the event off at a main hotel conference room that night, Ill try to email the pic to johnboy of the new NO NONESENSE ticket inspector 😀

Just for a note, the giant ice sculpture of an ACTION but was quite impressive, it did look expensive though.

I would hope so,
they should also have to try to catch smarmy little toe-rags by their baggy jeans by closing the back doors before they escape

Do they get extra points for using Government resources to drive union members to rallies for free, at the tax payers expense? WIthout contributing a single cent to the hire of the service.

Pam Dick - 16 minutes ago
These popular trees represent a soldier killed in the ww1.The were planted by the by the town's population to honour them. Le... View
Ross Hamilton - 23 minutes ago
Man would I love to get my hands on some of that wood View
Peter Hatfield - 3 hours ago
Eli Hurley It's a decision by Transport for NSW, and while its a beautiful avenue, given the risks it's probably for the bett... View
Opinion 5

Belinda Spouncer - 1 hour ago
Staff should be allowed to work from home at least one day of week its a win win for both the employee and employer. If nothi... View
Anne Atherton - 8 hours ago
For me it's not about working less but about working differently. I enjoy working from home and the flexibility it gives me.... View
News 23

Nikos Manikas - 3 hours ago
Dianne Latimer if Brisbane get a 2nd team then all Ch9 will do is alternate between the 2 Brisbane teams. just like now they... View
Food & Wine 128

Emma Jelbart - 5 hours ago
Meagan Kopatz I'm in Fraser and heard something like about the time you would have heard that bang (or boom?) in Kaleen. Agre... View
Opinion 37

Christopher Cuba Rabanal - 6 hours ago
We don’t put a price on people’s lives. This is the teachings of our great society and Nation. So let’s not start now. View
Carl Ostermann - 8 hours ago
Considering the fact that the ACT is surrounded by NSW and the border has to be open for surrounding towns, it is in our best... View
Amy Willmott - 11 hours ago
Nick Anderson Couldn’t agree with you more.... View
News 72

Kiosha Coleman - 8 hours ago
Craig Coleman does this help you View
chewy14 - 11 hours ago
What makes you think they don’t have a cost benefit study on this project? Have you asked for it? This is a major freight r... View
News 60

Annette Mckay - 10 hours ago
That's a shame Target has much better quality than Kmart. I don't shop in Kmart much because of the quality don't know where... View
News 5

John Moulis - 11 hours ago
Not much of a choice is it? A woman from Labor and a woman from the Liberals. And to think that people could have had the cha... View
show more show less
*Results are based on activity within last 7 days

The $200 million Monaro Highway upgrade is a step closer with the release of concept designs for a southbound flyover at the...
Community 130

The longstanding saga of Braidwood’s historic highway entry lined with golden and Lombardy poplar trees is progressing to the next...
Breaking 0

Mystery surrounds a loud bang heard early this morning in Belconnen and Gungahlin but it's not the first to be...
Community 130

@The_RiotACT @The_RiotACT
With more local businesses turning to home delivery each week, one of the latest is a big name in fruit & veg, Ziggys Fresh https://t.co/CbJxNYEY3y (5 hours ago)

@The_RiotACT @The_RiotACT
There's continued dissension at the top in Capital Football as an immediate past Board member says the organisation's behaviour has jeopardised a return to competition this year https://t.co/VC6ze6NRAL (6 hours ago)