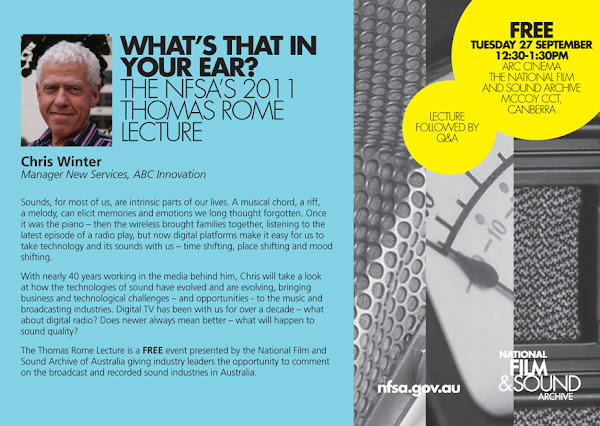 The National Film and Sound Archive has sent this in and it looks interesting:

Chris Winter is Manager of New Services at ABC Innovation, and has a
long background in new media, digital TV, technology marketing and
radio. Amongst his many achievements, Chris was presented with the
Australian Interactive Media Industry Association (AIMIA) 2007 Outstanding
Contribution Award.

Established in 2008, the Thomas Rome Lecture gives leading figures in the
Australian recorded sound industry an opportunity to present their thoughts
and ideas on current issues faced by industry. It is named after the man
who made the oldest known surviving sound recording in Australia. Rome’s
recording, made in 1896, was a novelty song called The Hen Convention
which featured a shop assistant imitating a clucking chicken.

This is a free public lecture. No rsvp is required.

Alan Vogt - 35 seconds ago
No. Maybe in another 20 Years. View
Vanda Catanzariti - 3 minutes ago
Yes... lets do this! 🏆 🏁 View
Julia Ross - 7 minutes ago
As long as it's in warmer weather. The June long weekend was just too cold for spectators and drivers. View
Community 45

Deb Crisp - 4 minutes ago
So super proud of my sister starting the Gordon Park rock spotting with my daughter's the first week of lockdown... 5 weeks l... View
Karenne Eccles - 24 minutes ago
This i has been happening in Kiama also ... View
Sam Da Cruz - 1 hour ago
India Elise this why you were painting rocks yesterday??? 😂 View
Lifestyle 30

Kay Pearce - 21 minutes ago
Helen Kook thats just what Grandma (Mrs Prowse) would do!!... View
Helen Kook - 2 hours ago
Knowing my grandmother it would have been an easy walk back in those days View
News 22

The promise of better light rail access to the Mitchell business hub is now a reality with services commencing on...
Community 45