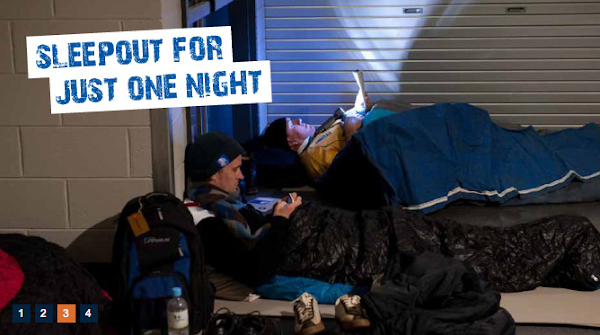 From making decisions to making a difference.

CEOs used to making decisions in the comfort of their boardrooms will soon be sleeping outdoors on a cold Canberra winter’s night to raise awareness of, and funds for, the plight of those living without a roof over their head.

The 2011 Vinnies CEO Sleepout was launched on Wednesday, 13 April, during which several Champions of this year’s event shifted their attention from making decisions for their own companies to providing support for the growing issue of homelessness.

Grace Stephenson, a 23-year-old single mom, spoke of her experience as a homeless person forced to sleep in her car with one of her young sons – in Canberra bush and then near a police station where she felt safer. Grace became a ‘homeless statistic’ when she became the victim of domestic violence. When her partner was arrested and extradited to another state she found herself with huge debt and was evicted for not being able to pay her rent.

Leading supporters who attended the launch, wearing winter beanies and armed with their sleeping bags, included: John Falzon, St. Vincent de Paul Society (National CEO); Andrew Sayers AM, National Museum of Australia; David Pembroke, Contengroup; Mikeal Svensson, Hyatt; Peta Barrett, Raine and Horne Canberra; Sue Hutley, Australian Libraries and Information Association, and Clinton Hutchison, Zoo Advertising. “I had no idea that while I sleep in warmth and comfort every night that families are sleeping out, including with little ones, or that so many people are in such strife,” says Clinton Hutchinson.

Armed only with a cardboard box, a sleeping bag and a mug of warm soup, Canberra’s CEOs will be a world away from their usual comfortable surroundings. Last year Canberra raised more than $354,000. This year, the target is to have 150 CEOs sleeping out to raise $450,000. All money raised will go towards supporting the Vinnies homeless services in the Canberra region.

The event will also challenge perceptions on homelessness. “While spending one night out in the cold can’t give you a full sense of the fear, alienation and desperation felt by those who have nowhere to call home, the Vinnies CEO Sleepout give participants insight into the hardships faced by the country’s homeless,” said National CEO of the St Vincent de Paul Society, Dr John Falzon.

Visit: www.ceosleepout.org.au to register or to donate!

Did any of the CEO show up with either a Blackberry, iPad, tablet, or even an eBook reader?

This is actually not allowed. They are given a list of what they can and can’t bring.

Hope the CEO’s are faring well tonight. It is pretty cold.

WTF is a mom? I thought that was the local Aboriginal word for ass. As in “go sit on you mom.” I am disgusted that American English is sneaking into Australian society.

I do this several times a year on rough ground rather than under a building facade [which will provide warmth after a sunny day]. Instead of someone giving me mug of soup I make a fire and boil my own water. In the past my sleeping bag has been replaced in necessity by an aluminium foil “emergency blanket”, on another occasion the floor mats from my 180B Datsun, and once it was just my motorcycle leathers under a blue tarp [it was that cold the drinking water inside my mates car froze solid by sunrise]. I do this for recreation [camping], they do it once a year [with some luxuries – note electronic device in 1st and 2nd person’s hands in photo].
My point is that these folks only have to put up with one night of discomfort during which they don’t have to worry about where they will get food from tomorrow, where they can go to the toilet [so few public toilets around and fewer businesses who’ll let you in to use theirs. Incidentally, where do they go – these white collar workers come paupers?], how they can get out of their situation – whatever it may be and many, many more problematic issues that dictate your daily lifestyle.
I sincerely hope the money raised does go to those who need it, unfortunately my guess is the people doing the charity “hard yards” are also the ones appropriating the funds.
Note – yes I’m being a bit hard on them, it’s that time of the month…?

Did any of the CEO show up with either a Blackberry, iPad, tablet, or even an eBook reader?

One part of me says good on them for doing something, and raising some money to help people in distress.

Another part of me feels vaguely queasy at all the PR, bloviation and mutual congratulation going on because some of the most affluent people in our society chose to “suffer” for one night before returning to their comfortable toasty houses for the other 364 days of the year. Somehow it all seems a bit wanky.

I’d have thought that several hundred thousand dollars would go to goood use in directly helping people.

a cardboard box, a sleeping bag and a mug of warm soup

WTF is a mom? I thought that was the local Aboriginal word for ass. As in “go sit on you mom.” I am disgusted that American English is sneaking into Australian society.

Stanhope and Hargreaves should have had a night there, maybe they might get an idea how it feels, but of course that would be only one night for them

One part of me says good on them for doing something, and raising some money to help people in distress.

Another part of me feels vaguely queasy at all the PR, bloviation and mutual congratulation going on because some of the most affluent people in our society chose to “suffer” for one night before returning to their comfortable toasty houses for the other 364 days of the year. Somehow it all seems a bit wanky.

Great cause and well done to the actual CEO’s doing it ….! for the others well done on spinning positive Pr for your boss’s or partners business

Meg Salic - 2 minutes ago
Shane Hughes I grew up in midwest rural America and my uncle drove trucks and my dad drives farmer equipment. I was always ta... View
Andrew Satrapa - 11 minutes ago
Amazing how all the excellent drivers of Canberra congregate in this page to lambast all us bad drivers. Let me remind you al... View
Andrew Satrapa - 21 minutes ago
Mandy Evans that is an inexcusable supposition in my view. View
Property 12

John Moulis - 4 minutes ago
They must have a lot of pull. Even people on Sydney's upper North Shore who want to remove trees which are blocking the view... View
Pam Dovey - 9 minutes ago
Margaret Hunt did you see this? View
Run_W - 50 minutes ago
Wasn't this the Club that was complaining last month about being broke and if someone put planes on the lake it would mean th... View
Property 16

Ben Lindsay - 36 minutes ago
Neil Willis could almost walk to work from your joint View
Peter Taylor - 1 hour ago
Amanda Sanderson. Short commute. Walk to work, but getting home would be a struggle. View
Bec Scott - 2 hours ago
No lead there to my knowledge View
News 7

Lewis P Owlay - 2 hours ago
I believe you mean the Delta Myna View
Lyndsey Simcoe - 2 hours ago
Graham Hatch see! They are psychos! View
Acton - 10 hours ago
Pigeons, those flying rats, are also pests. Growing problem with them nesting and crapping under solar panels.... View
News 12

Ben Johnston - 9 hours ago
"In a 50-minute ministerial statement this morning (22 June), Business Minister Tara Cheyne told the Legislative Assembly tha... View
summs - 12 hours ago
At least 15% of the budget went to 19 (2%) businesses whilst 23% of the businesses received less than $50? Was the scheme int... View
Lewis P Owlay - 12 hours ago
Worked a treat View
News 8

David Hennessy - 12 hours ago
Wish they were as quick to fix the problems in the CTP system for pedestrians and cyclists who are damaged for life but have... View
Courts & Crime 2

Capital Retro - 13 hours ago
Probably the proceeds of cream. View
show more show less
*Results are based on activity within last 7 days

New road safety cameras on Northbourne Avenue and Barry Drive in the city have identified around 5000 motorists exceeding the...
Community 8

The Canberra Liberals have called for an audit of the ChooseCBR voucher scheme after the fund was exhausted within a...
Opinion 44

I never thought I'd say it, but the streets of Canberra seem to be becoming meaner these days. In the...
Property 29

@The_RiotACT @The_RiotACT
The Safe and Connected Youth Program has been an outstanding success for Canberra families in conflict, but funding could soon run out on 30 June https://t.co/4xL3XjKfiz (45 minutes ago)

@The_RiotACT @The_RiotACT
After witnessing a number of alarmingly dangerous incidents on the road, Zoya Patel is starting to think drivers in Canberra might be getting more aggressive. Is she right? Or are we simply more complacent about the dangers of driving? https://t.co/FDIQqXo2ci (3 hours ago)