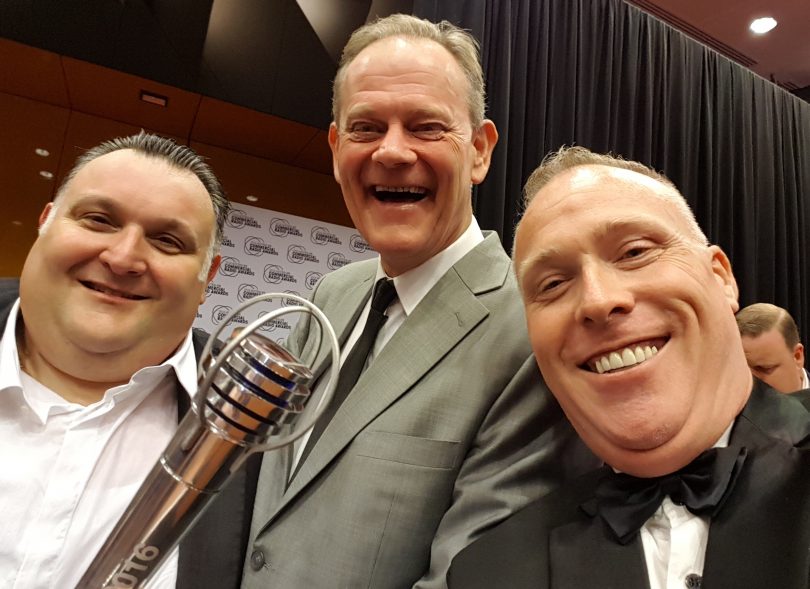 Former 2CC radio breakfast presenter Tim Shaw’s campaign to return to the airwaves appears to have come to naught as the talk station announces it will return to local breakfast broadcasting – but with new talent.

The station made the announcement last week following Alan Jones’s decision to step down from his Macquarie Radio broadcasting role back in May this year. Since dispensing with Shaw as breakfast presenter last year, 2CC had streamed the Jones program nationally in what was widely believed to be a cost-cutting measure to mitigate Jones’s multi-million dollar salary and defamation payout costs.

But rather than bringing back Shaw, 2CC will bring Stephen Cenatiempo to Canberra to host the program from 13 July.

Cenatiempo will be most familiar to listeners as host of the Triple M network’s program, Australia By Night. The program ran across almost 30 stations and was headed up by Cenatiempo for almost two years before being axed by Southern Cross Austereo in December 2019.

In a relatively brief radio career that began in 2010, Cenatiempo was previously the news director and mornings announcer for local radio in Muswellbrook. Before that, he was afternoons announcer in Coffs Harbour. Prior to radio, he worked in sales and management in the NSW Hunter and New England region.

2CC says Cenatiempo, who has six Australian Commercial Radio Awards to his name, has 10 years’ of experience as a talkback presenter and will bring “a hard-hitting program that is firmly focused on all the issues affecting Canberrans”.

In a statement from the station, Cenatiempo said, “I’m looking forward to moving to Canberra and really shaking things up, especially with the ACT election just around the corner. My local breakfast show will put listeners first.”

The station also says it has made a strong investment in local programming and content during recent years. Shaw was moved from the key breakfast slot after Jones’s show was networked across Canberra by Macquarie Radio Group in mid-2019, and he left the station soon afterwards.

Ray Hadley’s morning show is currently networked from 9 am to 12 pm, followed by Deborah Knight’s networked afternoons program from 12 pm to 3 pm. The 2CC drive shift from 3 pm – 6 pm is locally anchored by Leon Delaney, who moved to Canberra from the Gold Coast last year after a long career in Queensland.

2CC, which badges itself as “Talking Canberra” is part of the Capital Radio Network. The station recently moved into its new Canberra Radio Centre in Crace.

General manager of 2CC, Michael Jones, said in a statement: “With recent cutbacks in other media, across radio, newspapers and television, we are proud to be investing in, and growing, our radio stations.

“This return to local breakfast in Canberra comes on the heels of two new local radio stations we’ve launched this year, My Canberra DAB and Snow DAB+, and our continued investment in Forever Classic 2CA.”

The 2CC breakfast show ranked eighth out of nine stations in the most recent Gfk ratings, with the same ranking for the station’s overall offering.

“Isn’t AM radio for news and dog/horse racing?”

Isn’t AM radio for news and dog/horse racing?

It is good to see a local breakfast show back on 2CC. The relaying of Alan Jones at breakfast was a disaster which harmed the station down the line. Prior to Jones, 2CC was the top talk station in Canberra the morning and afternoon timeslots. After Jones began the station slumped to behind the ABC, even News Radio and RN.

Jones had been a problem for a long time but 2GB kept him on because he was personal friends with the previous bosses and was part of the Sydney cafe society. When Nine took over the station they were left with a $5 million defo bill and Jones continuing to shoot off his mouth each morning with unfounded and defamatory nonsense. There was also an advertising boycott which saw 2GB losing over 60% of their sponsors thanks to Jones. His replacement Ben Fordham was more concerned with parish pump Sydney nonsense rather than anything which would be of interest to Canberra. And no Ben, here in Canberra we cannot see “Migaloo” and the other whales you and your callers gushed about from anywhere in our fair city.

The breakfast shift is important because it is usually the first thing listeners hear on the station each morning and sets the agenda for the day. To finally have local programming back is welcome, and let’s hope that we have seen (and heard) the last of biased shock jocks and wannabes from Sydney putting us in a bad mood first thing in the morning.

Maybe we’ll go back now and have a listen, we gave up, poor Tim was just dreadful

They should have kept Tim

Russell Nankervis - 7 hours ago
Lori J Tas better vote Greens then. They value public institutions like this View
Monica Tiffen - 9 hours ago
It is a very interesting place. I hope things are worked out!... View
Teresa Layton - 10 hours ago
Mark Huppert agreed. What an obscene amount of money being thrown at something that requires no change. View
News 70