Antonov at the airport?

Is that a Russian Antonov AN-124 sitting at Canberra airport?

It has Russian colours on the tail.

If it is then it is the largest plane to land there and is used to transport the Erickson skycrane. – these are being assembled by going past the old Fairbairn air force base and just past the current airforce hangers.

The AN-124 can carry a payload of 230 tonnes. Approx 100 of these aircraft were built and are the largest commercially operated aircraft in the world. They are 30% larger than a C5 galaxy.

If they bring these freighters in at night it will be just like back home on the Mornington Peninsula and listening to the freighter (probably an old jumbo) going overhead at 3:00 am to Avalon.

UPDATED: xpantz has linked to a picture! 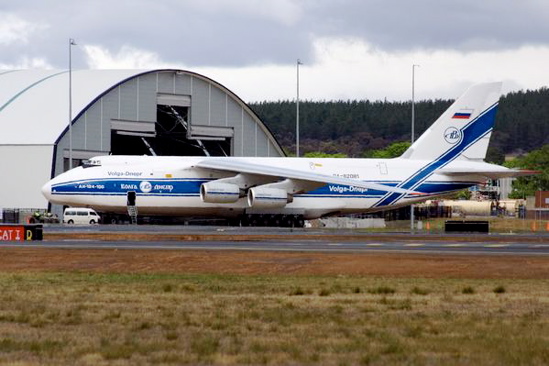 20 Responses to Antonov at the airport?
Filter
Showing only Website comments

Ah, but the Spruce Goose only flew once which is no “Herculean” effort given that the aircraft’s proper name is the Hughes H-4 Hercules…

Indeed but what an extraordinary prototype,almost entirely made of birch and with a wingspan the length of a football field,minus a couple of metres,with 8 Pratt and Whitney’s.It would’ve made the C-130 look like a midget!

Could Thumper have been correct nearly 7 years ago when he/she posted that ?

Ah, but the Spruce Goose only flew once which is no “Herculean” effort given that the aircraft’s proper name is the Hughes H-4 Hercules…

Anyone know what the grey planes were at Fairbairn this week? One big and one small.

Submitting a new article is done at the top right of the page, digging up a SEVEN YEAR OLD thread is rather annoying.

I heard the airport guy on WIN tonight trumpeting Canberra as competition to Sydney airport for freight, as we have no curfew, unlike well managed cities…great. Will these huge planes arrive all through the night soon?

Not while Canberra is an AQIS declared Rural Destination. Then the freight has to transported to Sydney or Melbourne (anywhere but Canberra) at great expense. If it were viable it would be happening now.

Anyone know what the grey planes were at Fairbairn this week? One big and one small.

The Beluga is bigger than this pisss-ant Sovietoski plane. Go to the airbusdotcom home page.

Remember those giant grey planes that brought the vehicles for Bush’s visit? Monsters, huge. their wings seemed to be drooping onto the tarmac.

And YES! Snow bought the airport because it has no curfew! He wants to bring jets in from Singapore at 2am. And freight planes are actually noisier. Even if the train doesn’t happen in the near future, he’ll dream something else up.

There’s a big demand to be able to land big planes in Eastern Australia during the early hours of the morning. It would mean more potential for more takeoffs from places like Asia and The Americas. Snow can see big money in it. He actually stated, back when he bought the airport, that the biggie for him was the lack of a curfew.

I heard the airport guy on WIN tonight trumpeting Canberra as competition to Sydney airport for freight, as we have no curfew, unlike well managed cities…great. Will these huge planes arrive all through the night soon?

Well off you go, tortfeaser – go get some. We can’t rely on JB & Kerces to do all the snappin’.

That Eurobus (Airbus?) plane was here a few years ago wasn’t it? I think it’s called the Beluga but an Antonov 124 is waaay bigger (if bigger is longer although the Beluga might be ‘higher’)

The plane that transports fuselage sections of the Eurobus A380 is likely bigger.

pity about the railhead – should be some serious lobbying done right now with ACT/NSW/Fed govt’s to keep the national capital railway station in place (and given a bit of an overhaul).

Um, many years ago…

They are one big bad boy of an aircraft.

I remember seeing a Galaxy in Norfolk VA many years and thought that it was big, until a Starlifter taxied up next to it.

Watching that thing later take off was amazing…

Andrew Kenna - 11 minutes ago
nope just take a look at nsw, the amount of times cops are assaulted and the courts dismiss the charges... mandatory sentence... View
Property 1