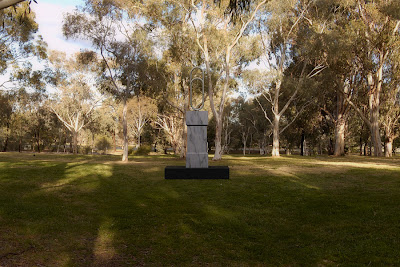 The National Public Service Memorial, commissioned as a Bicentennial project, is an acknowledgement of the contribution made by Australia’s public servants to the good governance of Australia. It sits just to one side of Federation Mall near the East Block building now housing the National Archives of Australia. Although a very quiet part of the Parliamentary triangle, the location is appropriate as East Block was part of the first office accommodation constructed in Canberra to house public servants relocated from Melbourne.

Originally intended to be completed in 1988, the design, siting and funding of the Memorial provoked protracted negotiations between various government departments and agencies. Consensus on the various matters in dispute was not achieved until 1994 at which time construction commenced. Further delays ensued because of the need to find marble of suitable quality to be used for the Memorial. As a result it was not until early 1996 that the Memorial was finally ready to be formally inaugurated by the Governor-General.

Unfortunately the ceremony went unnoticed because of the impending federal election and the subsequent years have done nothing to draw public attention to its presence.

The Memorial is of modest size, standing a little over 3 metres high. When viewed directly from the front it is seen as two elongated and overlapping ovals of thin metal tubing surmounting a marble column which, it turn,
stands on a large square slab of black granite. The overlapping ovals are symbolic of a harmonious and inclusive ideal of public administration. The tubing is chromed to reflect all the light it receives, emitting none of its own, consistent with the public service’s commitment to faithfully mirror in its policy settings not its own views but the needs and aspirations of all Australians. Special care has been taken to ensure that the ovals are precisely aligned with the vertical, leaning neither left nor right.

The Memorial’s design, however, offers a more nuanced view of public administration than is perceived at first glance. When stepping to either side of the Memorial, the visitor sees that the oval structure is open-ended; the perfection seen when standing directly in front of the Memorial is illusory. From the side, ideal of public administration is shown as an imperfectly realised outcome. There are, the Memorial defiantly proclaims, always loose ends. Perhaps it is also, in more light-hearted sense, an acknowledgement of the public servant’s perennial problem of making ends meet. In yet another sense, the design highlights the often cyclical, incrementally advancing nature of public policy. 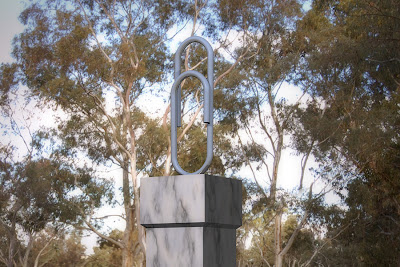 In a city of public servants, the Memorial deserves far more attention than it receives. With celebrations of the end of the financial year soon upon us, why not make a lunchtime pilgrimage to the Memorial and reflect on its
timeless message.

[ED – The information in this post may, or may not, actually be true.]

*Looks up from preparing explosives designed to blow up monuments*

At least I was close.

This brings to mind a prank pulled by John Deeble, a Canberra artist.

The Sydney Morning Herald’s journos were on strike for a week or so some time in the early 80′ and management were writing the stories (scabbing, as it were). As you’d imagine they were pretty thin editions, with bugger all real news. Up pops John Deeble.

From recollection, Deeble was a sculpture student living in Sydney at the time, and he’d re-plaqued several landmark sculptures around central Sydney with simple “Sculptor – John Deeble” plaques.

One of the management writers noticed a few of the pieces and on doing some research discoved that nothing had ever been written about the artist. With no real news to print the Herald ran a front page on ‘the little known great artist’, and followed up with further discoveries of his work over the next few days. By Thursday’s edition Deeble’s hoax had been unearthed and a photo of the artist, with a paper bag over his head, appeared on page one with the caption “Sculptor – John Deeble”.

You are very, very close p1, but the location is actually here:

I’d love to see these photos pinned to the appropriate location on google earth for the benefit of all the virtual tourists.

This would be much better than a crappy windmill in the middle of the road.

I’d love to see these photos pinned to the appropriate location on google earth for the benefit of all the virtual tourists.

Banning something just makes it even cooler!

it was the obvious solution. That, or reading documents before posting them….

The Secretary then baned paperclips from being used in the building. The ban is still in force.

You could set this up near DFAT and cause An Incident, as paperclips have been banned in DFAT since a certain embarassing occurance caused by one (not making that up). Paperclips are now contraband there.

I’m intrigued. What possible embarrassing occurrance could warrant the banning of paperclips in a large Govt Dept?

How about a red granite path around it to reflect the red tape you need to overcome to approach it?

brilliant! i love your descriptive and insightful interpretation of the memorial.

“Special care has been taken to ensure that the ovals are precisely aligned with the vertical, leaning neither left nor right.”

“From the side, ideal of public administration is shown as an imperfectly realised outcome.”

You are very clever indeed…

How about a red granite path around it to reflect the red tape you need to overcome to approach it?

Thats twice you’ve got me! (I presume the “immigration Bridge” was one of yours too right?)

Slops to zig for flaunting what is either shameful (offensive) fantasy/misunderstanding or (conceivably – if experience-based) shameful history.

ED – did you have to add the disclaimer?

Peter Athey - 2 minutes ago
3 words; flying spaghetti monster serious - look it up. buy yourself a colander... View
Jennifer Crawford - 14 hours ago
Drew 🍜 there are more of you! View
Jac Bec - 17 hours ago
Nicole and strain on our health care because someone chose religion over safety View
News 104

Julie Macklin - 23 minutes ago
James Dof And no one has ever expected trades people to cycle from job to job with their tools. That is just a straw man argu... View
Heather Grant - 3 hours ago
Suggest they hire extras from Deane's and Keir's (and anywhere else close by that have spare buses for hire). Instead of look... View
Ashley Wright - 6 hours ago
Cary Elliot Johnson do you have an example of such a city but when defining decent? define it from a daily users point of vie... View
Opinion 47