A Look Around Canberra: McKellar 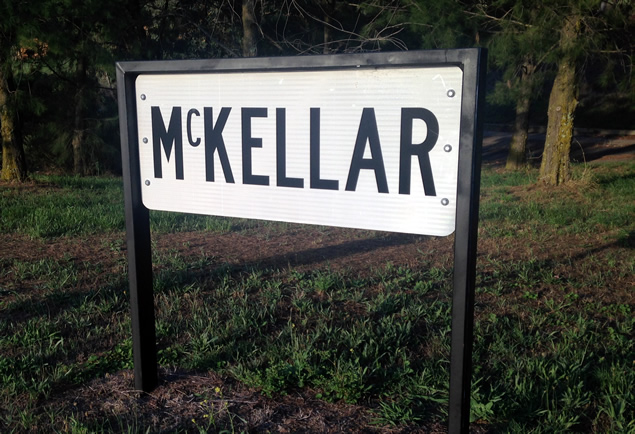 This week I thought I’d head up to the Belconnen area of Canberra, or as it’s known to some: Belco. With all the news stories on Bronwyn Bishop kicking record numbers of Labor MPs out of the House of Representatives in the last week of Parliament I thought it fitting to check out the suburb that shares the name with Madam Speaker’s electorate of McKellar.

I automatically assumed this suburb was named after Dorethea McKellar (author of the poem A Sunburnt Country), but I was soon to find out that I was completely incorrect. It’s Dorethea MACkellar, whom Ms Bishop’s electorate is named after, and this McKellar is one Gerald Colin McKellar – Senator, Deputy President of the Senate and Minister for Repatriation before his death in 1970. The suburb was gazetted on 15 January 1970.

For some unknown reason, I had it in my mind that McKellar was a really low socio-economic suburb and maybe even a bit dodgy. I was completely wrong. 98% of all the houses I saw were beautifully kept and the streets were really clean. It looks like a lovely suburb to live in and perfect for raising a family.

As I was driving around aimlessly looking for the shops, I came across some bright blue netted fencing and a big hole in the ground… accompanied by an upside down, faded Foodworks sign. I guess that’s where McKellar shops used to be. I had a poke around and discovered a small Malaysian restaurant behind all the rubble. It was open but I only found it because I was looking really hard for anything resembling a shop – do people even know it’s there? I suppose regulars that have been going there for years would know that it’s still open.

Mackellar has its own preschool, but the closest primary school is Miles Franklin Primary in nearby Evatt, and Kaleen High School a couple of suburbs away.

I did notice one playground while I was zipping around, but it was on the other side of a big oval/nature reserve. Ordinarily I would have traipsed across to check it out, but the sun was going down and I was a bit chicken about wandering off in the dark.

All in all, a really nice suburb. Not a huge amount in the way of facilities now that there’s no shops, but Belconnen Westfield is only a few minutes down the road and the schools aren’t too far away either.

Blake Anthony Cross - 4 minutes ago
Great read bit depressing as well.. all sport stories are.. this is why we haven't cured cancer to busy talking to people not... View
Kacey Butterworth - 11 hours ago
I feel extremely privileged to have had Ben as a mentor, teacher and year co-ordinator throughout my high school years. He ta... View
Annamaria Zuffo - 14 hours ago
Fantastic Ben. Lucky kids and us for knowing you. View
News 14

Fran Bink - 7 minutes ago
Unsung hero 👏🏻 View
Soledad Berenguer - 8 minutes ago
Well deserved! View
Jan Gowing - 18 minutes ago
Congratulations....so well deserved. He is an inspiration to the community. I remember Ricky when he was a sports teacher at... View
Community 5