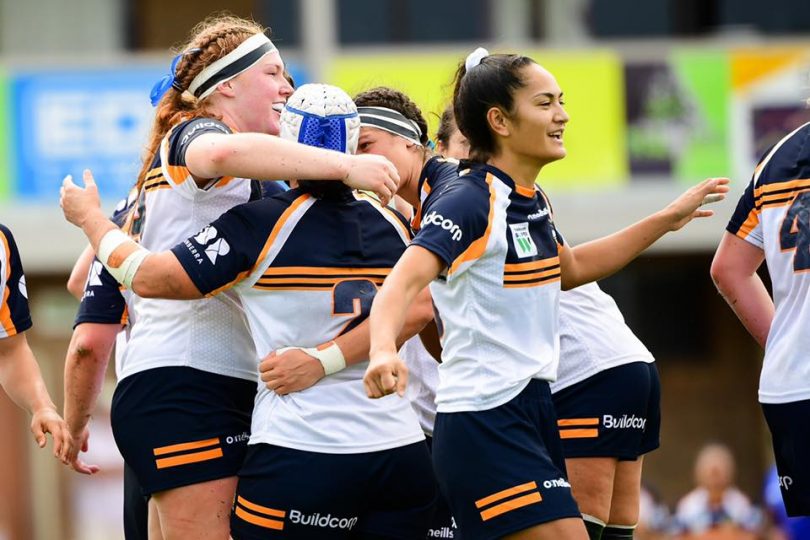 The Brumbies have split their two pre-season games in 2019. Photo: Supplied by Brumbies Rugby.

It was an unforgettable scene as 15 women celebrated as one on the try line of GIO Stadium. You would have thought they had just won the World Cup.

It was the 17th of March 2018 and Brumbies’ Peta Cox had just scored a historic first try in the new national women’s rugby union competition. Sure they were the only points the side scored as the Queensland Reds piled on six unanswered tries, but that wasn’t the point.

Fifteen women from all walks of life had just been given the chance to play the sport they loved and the 42-5 scoreline was the last thing on their mind. The euphoria was so great that it didn’t matter there were only a couple of hundred people in the stadium cheering them on.

For a stadium that had seen its fair share of historic and memorable rugby moments including two Super Rugby titles, that Peta Cox try was another indelible moment to write down in its long and storied history.

2018 was a landmark year for the women’s game, with the game’s popularity making massive strides in recent months. More women are playing rugby than ever before as more pathways are being developed to give more women the opportunity to fulfil their rugby dreams.

Girls are code-hopping from netball, league and football across to rugby as Super W starts to pave the way for girls of all ages who want to play for the first time.

Around 100 girls showed up to trial for the second season of Super W, a 20 per cent increase compared to the inaugural season.

The momentum of the women’s game is pulsing through the region. Can you feel it?

In 2019 there will be seven female teams participating in the local premier division, as East Rugby Club and Wests Rugby Club create teams to join ADFA, Vikings, Royals, Gungahlin and Uni-Norths in 2019.

To think that two years ago, there wasn’t even a Super W and there were only five local women’s teams boggles the mind.

When Super Rugby launched their 2019 season a couple of weeks ago, the four Super W sides were invited to the joint launch, a year after going solo at a function. While it may seem like a small gesture, the joint season launch has given the competition and its players some well-deserved recognition.

As the second season of the Super W is set to get underway next weekend (23 February) with a clash against the NSW Waratahs, the Brumbies led by head coach Adam Butt are desperate to help women’s rugby take a giant leap this year.

A new era for women’s rugby has begun. Long may it reign.

Toby McLenaghan - 30 minutes ago
Peter Marshall well it will be better then before. 🚴🏻💨 View
Marion Rae - 8 hours ago
Election year in a bellwether seat View
Hope Marie - 9 hours ago
Grace Stefanac now I can't crash on it wow View
News 10

Matt Maas - 8 hours ago
Viviean Laycock The new rules are disqualifying road legal cars that fit within NSW road noise restrictions from using the tr... View
Matt Maas - 8 hours ago
Viviean Laycock Penny has gone through this post commenting that many of the residents lived there first. That doesn't hold w... View
Ian Jackson - 11 hours ago
Some people will stop at nothing to shut this down View
Business 2