A taste off for Canberra’s Best Pizza 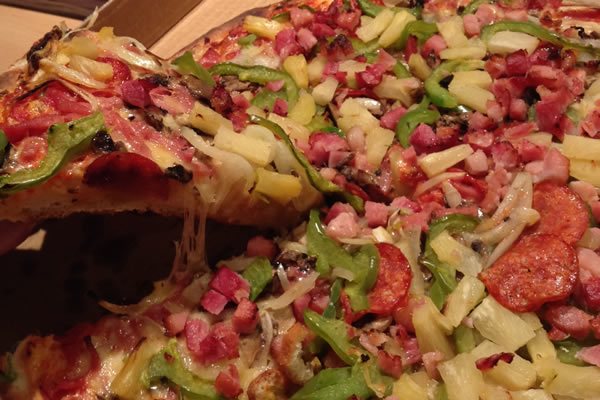 We had a broad range of nominations for Best pizza in Canberra, from the local Crust options (reliable, reasonably priced, easy etc.) through to the more gourmet options, with some inclusions of local takeaways.

The two that proved the most consistently popular were Zucchini Brothers in Chisholm and Pizza Gusto in Braddon.

We went with a standard order to ensure we could draw a direct comparison as much as possible. We figured the easiest way to do this was to order a supreme/with the lot pizza and garlic bread from each.

Sad as my life is, I was forced to try both – you can weep for me later.

I should disclose that I grew up in Tuggeranong and remember the early days of Zucchini Brothers and their ‘all you can eat’ nights. I discovered that the mere smell of their pizza brings back a flood of fond memories of youth. There was a certain amount of nostalgia wrapped up in this tasting.

Zucchini Brothers ‘with the lot’ includes tomato, cheese, ham, onion, mushroom, capsicum, pepperoni, pineapple and bacon. The cost was $23 for a large pizza and $3 for their garlic bread (which was a traditional soft in the middle, slightly crunchy on the outside garlic buttered side).

The pizza was exactly as I remember it (which probably goes a long way to indicate consistency). A thick, soft base topped with generous toppings and plenty of cheese. They have a strong, specific flavor that I recall from days gone by. I’m not sure if it’s oregano or some other herb but it’s distinctive to their pizzas (from my experience).

My tastes have however changed a bit and for me, the toppings were a little too generous and I would prefer a thinner base. But, for those loving the ‘more is more’ theory of pizza making, you’re likely to LOVE Zucchini’s. The ingredients are good quality and go a long way to differentiate their pizzas from those run of the mill deliveries we all know and sometimes love to hate.

We also sampled Pizza Gusto in Braddon. This was a completely new experience for me, although many people were quick to echo the pizza love for this place in first nominations.

We went for a supremo which has tomato, mozzarella, calabrese salami, shaved leg ham, seasonal vegetables, mushrooms, pineapple and olives, along with a Pizza Bianca (the closest thing they offer to garlic bread) which is a pizza base with garlic, rosemary, sea salt and olive oil. The pizza set us back $20 and the Bianca $9.

I should confess we were starving. It had been a long day and after a struggle of putting kids to bed, pouring a glass of red and having a pizza placed in front of us I think it may have been a world record attempt at how quickly a pizza can be consumed between two adults. It was so fast I didn’t take photos (sorry about that!). It helped that the pizza was amazing. Possibly the best pizza I have eaten outside of Italy. Thin, crisp base coated in tasty sauce and fresh, high quality toppings. The salami was proper finely sliced spicey salami that leaves a tingle in the taste buds. The olives were salty. It was good. So, so good.

The Pizza Bianca was also lovely and who doesn’t love salt and rosemary. For me though, I’m a lover of the soft buttery stuff but I do confess I may be in a minority and that preference possibly isn’t very trendy or hip of me.

The outcome of the challenge – for me – would put Pizza Gusto as the winner. The pizza was fantastic and my only criticism was that I didn’t order two.

But, I do point out that if you’re a lover of a thick base an loads of toppings, Zuccini’s is likely to be your winner.

It’s all a matter of taste after all.

Now excuse me while I go for a snooze. I need to be in good shape for burger trials coming up next week!

I was a long-time Gusto fan, until I discovered Pizza Artigiana at the Jamison shops. Best pizza I’ve tasted in Canberra, especially for fans of the Italian-style ‘less is more’ pizza.

i have always loved the gustos :p

Just reading the list of toppings made me feel sick… If you’re going to review pizzas, you should have separate categories for your American style “see how much stuff we can cram onto one pizza” pizzas and classic Italian “less is more” pizzas.

+1 Proper Italian pizzas are very simple and depend on the high quality of the ingredients for flavour, including the dough used to make the base – no bread mix or commercial yeasts are used. Contrast that with the “gourmet” pizza that relies on a large quantity of poor-quality, relatively bland toppings in order to achieve some kind of cumulative sense of flavour.

The closest I’ve had to an Italian pizza in Canberra would be La Capanna, but *many* years ago – probably back in the 90’s – they long since changed their pizza base recipe (I’m guessing to one based on a commercial mix) and a great deal of the flavour of their pizzas was lost.

Gusto also do a great gluten free base, although last time I tried one, I was disappointed by how small it was. Good excuse for trying 2 types of pizza in one sitting 🙂

Pineapple on not just a Zucchini Brothers Pizza, but also at Pizza Gusto? Oh dear.

Tomato is the only fruit that belongs on a Pizza!

Jeez, tough to please, don’t like Capsicum, chillis or olives on your pizza.

Pineapple on not just a Zucchini Brothers Pizza, but also at Pizza Gusto? Oh dear.

Tomato is the only fruit that belongs on a Pizza!

Just reading the list of toppings made me feel sick… If you’re going to review pizzas, you should have separate categories for your American style “see how much stuff we can cram onto one pizza” pizzas and classic Italian “less is more” pizzas. The latter are very hard to find in Canberra and I have a constant craving for them. I’m left to try make them myself, but my pizza base stretching skills are really crap, so that’s not working well for me either.

Zucchini Brothers do indeed make a good Pizza. Very generous toppings. But as Canfan mentions it would be that much better if the base were just a little thinner.

Sean Bishop - 13 minutes ago
Daniel nailed it View
Stefan Stirzaker - 2 hours ago
Good to see the white-anting after the fact in a bid to reduce the amazingly good job done by the upper leadership and member... View
HiddenDragon - 3 hours ago
The politics and the personalities are ultimately secondary issues - with increasingly nasty summers on the way, we need to d... View
Property 14

Tiffany Roy - 2 hours ago
Canberra hospital's mental health ward is awful. View
Gary Hatcliffe - 3 hours ago
Wow! 8 beds. Aren't we lucky.... View
Jarrod Male - 3 hours ago
Bianca Rossetti ....let's hope. My understanding was that it has been on the table for over 10 years now. The legislation aro... View
Business 3