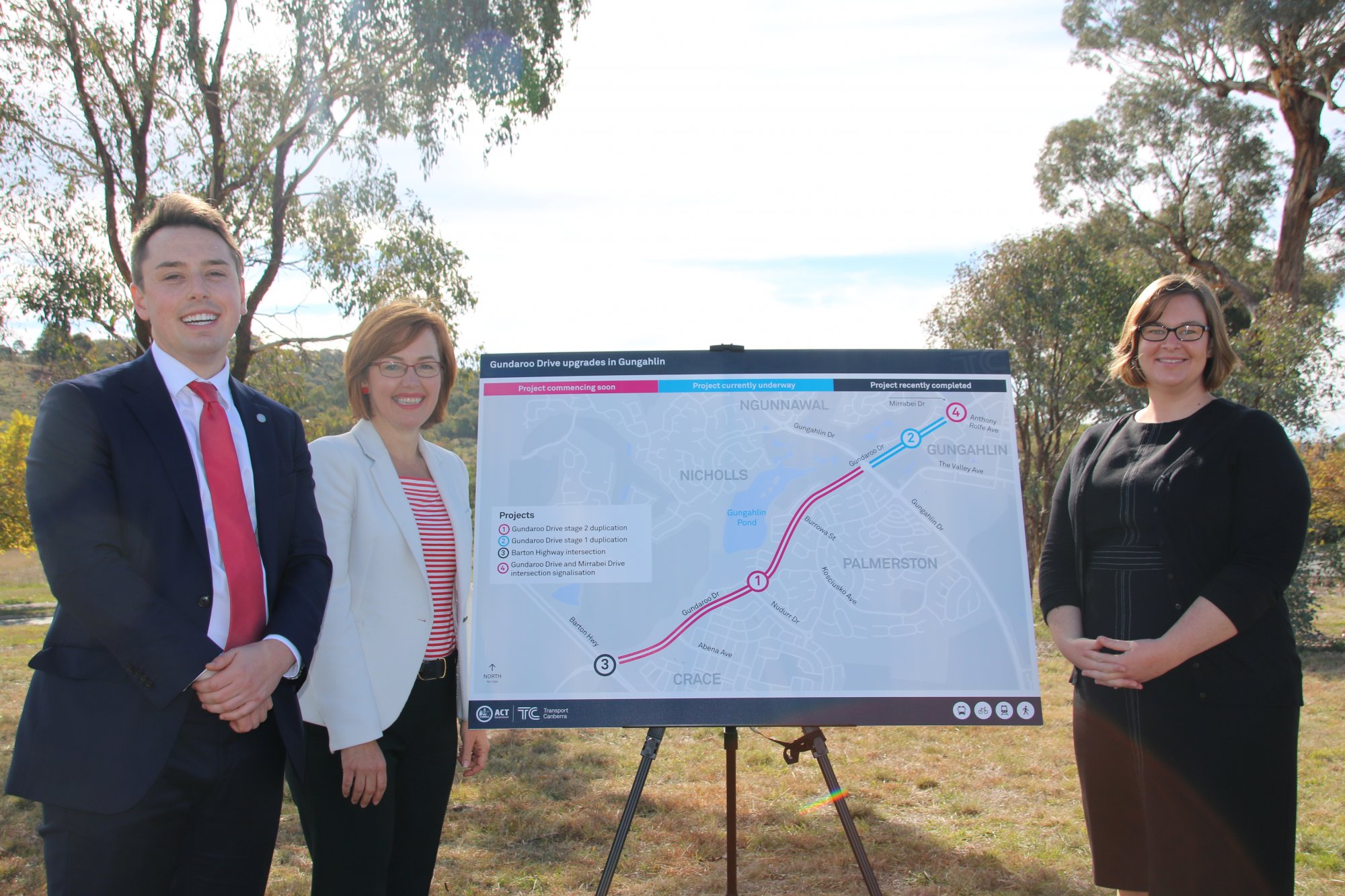 Work is expected to begin next year on stage two of the duplication of Gundaroo Drive between Gungahlin Drive and the Barton Highway following a funding allocation by the ACT Government.

The ACT 2017-18 Budget will commit $30 million over three years for work on the duplication as part of a roads upgrade package.

ACT Minister for Transport and City Services, Meegan Fitzharris, said the package will fund significant upgrades to major thoroughfares, as well as intersection upgrades and feasibility studies for future works.

“This $43 million roads upgrade package provides a significant boost to the world class road network around the Territory, and starts delivering the infrastructure commitments we took to the 2016 election,” Ms Fitzharris said.

“The stage two duplication of Gundaroo Drive between Gungahlin Drive and the Barton Highway is a project that many in the Gungahlin community have been asking for and I’m glad we can deliver on this commitment in the 2017/18 Budget.

“An additional 2.6 kilometres of Gundaroo Drive will be duplicated to a dual carriageway, extending the duplication works currently underway between Gungahlin Drive and Mirrabei Drive.

“The Government is also planning for the future needs of our city, and we have identified future roads works related to the Canberra Brickworks and the Molonglo developments that need the groundwork done now to ensure we can get the work done quickly when the projects are funded in future budgets.”

Ms Fitzharris said an extra $2.8 million in funding would also be allocated in the upcoming ACT Budget to upgrade the Gundaroo Drive and Mirrabei Drive intersection. This is an extension of the stage one Gundaroo Drive duplication which is already under way.

She said that the roundabout at this intersection will be replaced with traffic lights in order to improve the safety of pedestrians and cyclists trying to cross Gundaroo Drive, Mirrabei Drive and Anthony Rolfe Avenue.

A total of $1.2 million in funding will also be allocated in next month’s ACT Budget to upgrade the intersection of the Federal Highway and Old Wells Station Road. Funds will be used to design and construct a new four-way signalised intersection aimed at providing safe access to the new Canberra Park Resort tourist facility and events held at Exhibition Park.

Ms Fitzharris said that the roads upgrade package comes on top of $2.9 billion infrastructure investment in last year’s Budget, which is currently rolling out across Canberra.

“The 2017-18 ACT Budget will see the Government delivering on the commitments we took to the 2016 election on the areas that matter most to Canberrans,” she said.

Oh and the Bindubi street extension I believe is to be an access road into the suburb (think named Whitlam) planned for the southern side of William Hovell Drive. Think it is meant to meet John Gorton Drive near Coppins Crossing.

How much longer can Bindubi Street be? Is this suggesting dual lanes for Bindubi Street or a new road built to connect to Cotter Road?
William Hovel is definitely in need of a duplication heading East.

This ACT Budget is definitely on a road to success. Thank you.

New road to cotter road? Do you mean John Gorton Drive which is already 1/2 built? If so the plan for that is to cross the river and then take over the last few hundred metres of Coppings Crossing road with an upgraded intersection with William Hovell Drive. There was a development application for this last stretch a few months back so might be happening soon.

Either way it is better than the original plan where John Gorton Drive was going to meet William Hovell driv about mid way between Coulter and Bindubi drives.

How much longer can Bindubi Street be? Is this suggesting dual lanes for Bindubi Street or a new road built to connect to Cotter Road?
William Hovel is definitely in need of a duplication heading East.

This ACT Budget is definitely on a road to success. Thank you.

jam - 6 hours ago
The tram is more easily accessed by more people as it encourages dense development within its reach. It isn’t really possib... View
bj_ACT - 7 hours ago
The issues with the Bus route changes and the loss of bus stops for Tuggeranong in 2019 were obvious to anyone with half a br... View
Winkie Wee - 8 hours ago
I'm lucky in that I live within a short walk to either the R4 or R5 buses. I use the bus quite a bit unless both of us need t... View
Breaking 4

jam - 6 hours ago
That said, though, bikes are required to slow to around 10km/h before crossing - a bike crossing at the otherwise speed limit... View
jam - 6 hours ago
It is not “bugger all inconvenience” it actually makes a big difference when it is your commute! When I drive past a cros... View
liberalsocialist - 10 hours ago
What a disgrace. And while in no way taking away from this cowardly act, I have come from NSW where we are told to dismount a... View
News 161

Jimbo Lambert - 7 hours ago
Areas in Gungahlin haven't been mowed for at least 6 months! How hard is it to use our high rates money to employ some more m... View
Jimbo Lambert - 7 hours ago
Randy Goldberg you mean 6 months later? You must live in a more affluent area than Gungahlin, as it seems we have been alloca... View
Frank Arnold - 9 hours ago
Ohhh myyy Goddd !...Crooked pavements!...pot holes in our roads!...and now it's long grass !!!! FFS we hardly had any 3/4 yea... View
Community 6

kenbehrens - 10 hours ago
That makes no sense. Your comparisons are 20-25 years apart. The "new" bus route takes longer because it services a bigger ar... View
bj_ACT - 10 hours ago
Not sure about the adding 10 minutes to the 333 journey by changing to go past College St and UC. The change Only added 1.2km... View
michael quirk - 15 hours ago
Yes,but it is by no means certain that light rail stimulates urban redevelopment more than BRT. Much depends on design of the... View
News 1