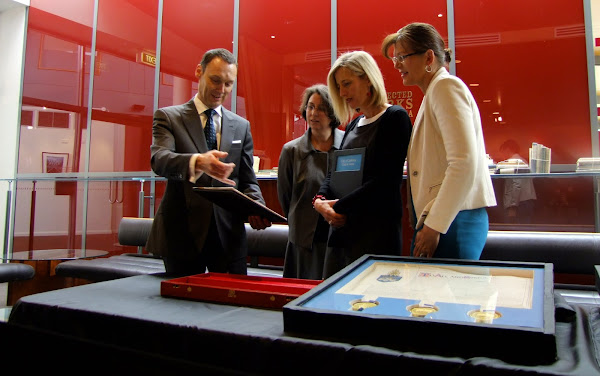 In a ceremony at Canberra Theatre today, the ACT coat of arms was handed over from the federal government to the ACT. The handover was a culmination of many years work, and is somewhat of a fitting birthday present to our Capital.

Representatives from both sides of the Government as well as several of Canberra’s cultural institutions were present to witness Katy Gallagher accepted the coat of arms from Kate Lundy, which was stored digitally on what appeared to be a small USB drive in a little bag.

It didn’t make for the most visually impressive handover, but as David Fricker, Director-General of the National Archives pointed out, the all digital nature of the transaction was a sign that the Government is keeping up with the times. 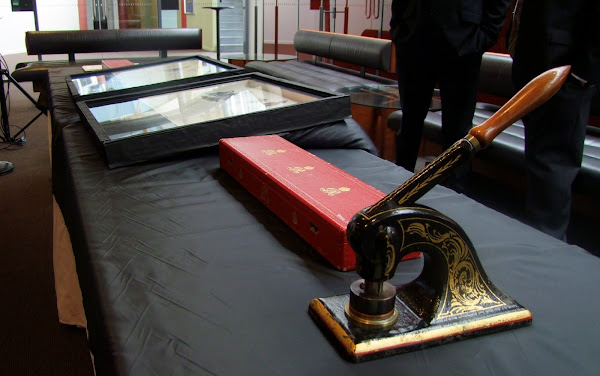 Still if they were really keeping up with the times they wouldn’t have used a USB, everyone knows it’s all about Dropbox these days.

UPDATE: Simon and Katy have a explained the design:

As the creator of the design in a 1927 competition, Mr C.R. Wylie later wrote that he had chosen as armorial bearings a triple-towered castle representing a capital city, and the sword of justice and a parliamentary mace, intersecting below an imperial crown.

The design also includes a white rose, the badge of York ‘in remembrance of the Princes of that House and their visits to the City’. A portcullis, the badge of Westminster, ‘the home of the mother of all parliaments’, was used as the crest, with a gum tree behind it symbolising the idea of Canberra as a garden city.

One white swan and one black swan were chosen as the supporters of the coat of arms. The Latin motto, adopted from the Federal Capital Commission’s motto, was pro rege, lege and grege – translated as ‘for the king, the law and the people’.

Ken Owers - 8 minutes ago
Shane Hughes Whoa whoa whoa there Shane, don't come around here with your radical ideas of logical thinking :-) View
Lance Arundel - 13 minutes ago
Your kidding me. Look at all the apartments that are around the place. We want more big blocks, not sub divide every single o... View
Giles Tranter - 14 minutes ago
Jose Vega that's why I said rates, not tax. Rates have been increasing for the express purpose of moving to a model that impo... View
Food & Wine 20

ACT resident - 24 minutes ago
Is this more spin from the lessee? ALDI at Fyshwick did not proceed because there are very stringent rules in the ACT regardi... View
Public Sector 3

chewy14 - 1 hour ago
Capital Retro, You've missed the point. The idea of collocating the charging points at the PV/Battery sites is for efficiency... View
Capital Retro - 2 hours ago
What about the 100% renewables/emissions free government buys up all the abandoned service stations in the territory and conv... View
Food & Wine 12

Machelle Nichol - 3 hours ago
Marcia Baker..do you know this place ? View
Andrew Bourne - 11 hours ago
Mr Happy used to make my combination short soup every second night back in the 80's. The best place to eat in town. Loved it... View
Robyn Bell - 11 hours ago
Love it !!! ♥️♥️♥️♥️ View
News 7

Kevin Hodder - 10 hours ago
Rent, rates, stamp duty, taxes, work cover compliance ect and every thing else the act gov stings you! just so you can open t... View
Acton - 13 hours ago
Another stunning achievement for the incompetent Greens/Labor ACT government. Along with the highest rates increases, the lon... View
Property 6

Matthew Beale - 10 hours ago
Sarah Young sadly it comes down to being able to buy in only very outer suburbs, if you have a deposit. It is a seller's mark... View
Sarah Young - 11 hours ago
Robert Chisholm it’s crazy, I think they should do a 1 house rule at the moment, I read something last week about buying an... View
What's On 1

Robbie Munday - 11 hours ago
Inadvertently result in budget cuts more like. View
Christopher Cuba Rabanal - 12 hours ago
Further explanation needed. Because I believe in decriminalisation for users and addicts. But hard prison sentences for deale... View
show more show less
*Results are based on activity within last 7 days

It's been a tough and frustrating year at the Canberra Raiders for coach Ricky Stuart, but being named in today's...
Opinion 64

Not that long ago, my partner and I were part of the teeming masses of young people trying to get...
Business 60

@The_RiotACT @The_RiotACT
Zoya Patel asks whether it's time we sacrificed big blocks in favour of a fairer use of land across the city https://t.co/RNR2DbGIl3 (2 hours ago)

@The_RiotACT @The_RiotACT
Sounds from the Suburbs, indie pop and Romantic Notions - check out what's on in #Canberra this week with our #GigGuide https://t.co/Q17cR5CkAy (11 hours ago)

@The_RiotACT @The_RiotACT
As the art world begins to rear its head again after COVID-19, exhibitions are back on. Catch Belco Arts' latest exhibition featuring two young artists https://t.co/j5T4N9j2Qj (12 hours ago)