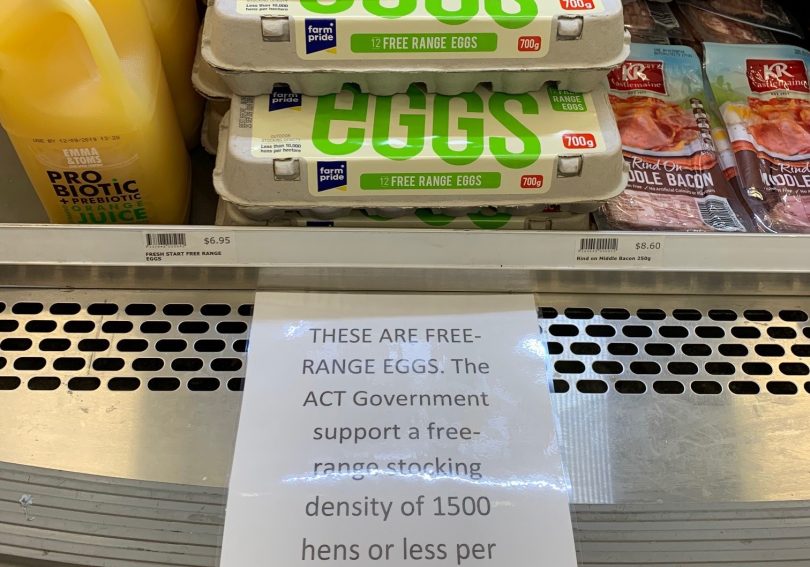 The ACT Government is hoping new signs displayed in the eggs section of local shops and supermarkets will aid its campaign for stronger free-range eggs labels but will also help consumers make informed choices.

Last year, the Federal Government enforced laws requiring all egg packages to prominently display the stocking density of its hens, allowing eggs produced on farms with a stocking density of up to 10,000 birds per hectare to be labelled as free-range.

The ACT was the only jurisdiction to disagree with the standard and argued that only eggs produced in farms with a stocking density of 1,500 birds or less per hectare should be labelled free-range.

The ACT Government argued that the stocking density of up to 10,000 birds per hectare wasn’t free-range, saying hens would only have a space of one square metre each.

ACT Minister for Consumer Affairs Shane Rattenbury said the 1,500 standard is more in line with consumer expectations, with the standard supported by RSPCA and the Humane Society International.

Unable to change the Federal labelling requirements on egg packaging, Mr Rattenbury has announced that the ACT Government is now requiring signs with information about stocking densities to be displayed on stores’ egg shelves.

The signs also state that the ACT Government only considers eggs produced with a stocking density of 1,500 hens or less per hectare to be genuinely free-range.

“Consumers have the right to make informed decisions about where their dollars go, and what type of egg-farming they support,” Mr Rattenbury said. “The ACT Government believes that free-range labelling should signify high animal welfare standards and not an intensive farming production.”

The Greens leader said he is still disappointed that other jurisdictions allowed the free-range standard in Australia to “be watered down”.

He pointed to a 2015 survey conducted by CHOICE, which found that 91 per cent of free-range egg buyers thought it was important that birds have room to move comfortably when they are outside, as to why the current standards are not acceptable.

“This is not what consumers think is free-range,” he said. “Consumers want the confidence that eggs labelled free-range come from hens who have the freedom to move around outside and to live reasonably comfortably.

“The simple addition of informative signage will hopefully go some way to assisting consumers who care about the living standards of hens to make an informed decision that aligns with their ethical principles.”

While our hospitals are are in chaos, with people dieing on waiting list for emergency procedures, our school results are going backwards, our homes are crumbling due to poor council oversight, and our union run public transport is forcing people to start driving again, it is very comforting to know that the ACT council of Greens and Labor are looking out for the chickens.

Such great news! Well done by the ACT Government 👍

Probs paid a motza to get that sign designed.

An excellent decision, but it may caused confusion amongst consumers unless politicians withdraw the intensive standard they approved.