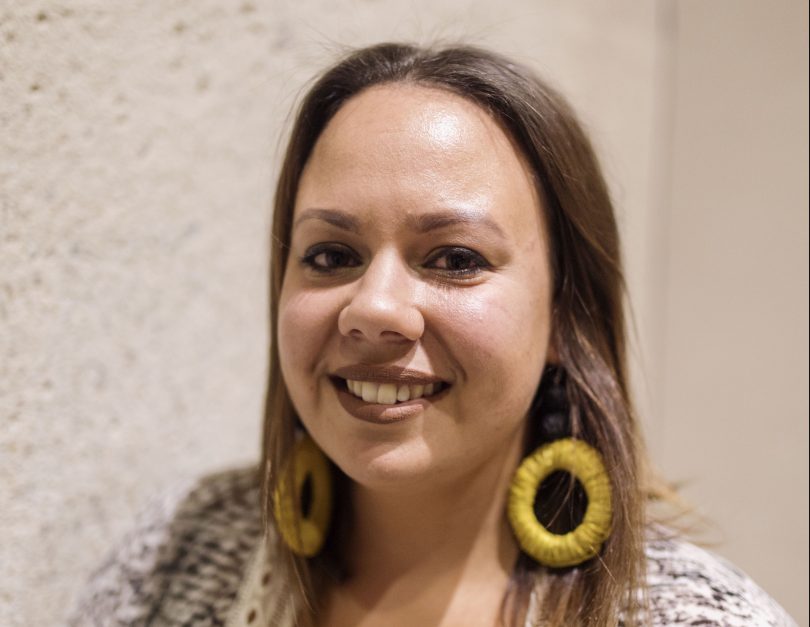 Krystal Hurst: ”We must not stop the rhythm of storytelling.” Photo: Jessika Spencer.

Worimi woman Krystal Hurst is a jewellery maker and owner of Gillawarra Arts, a creative arts business originating from the Mid North Coast of NSW. She was accepted as a finalist in the awards for her piece, Resilience, and is also nominated for the Emerging Artist Award.

In 2017 she was the ACT NAIDOC Artist of the Year and was recently featured in the Indigenous women in business ‘Morning Sky Project’.

A jewellery designer, painter, and cultural facilitator, she employs traditional techniques such as weaving, twining, burning and threading, inspired by Country, memories, stories and community.

Krystal specialises in contemporary Aboriginal artworks on canvas, murals and running workshops, and has been commissioned to create artworks for many government, non-government and community organisations as well as supporting fundraising initiatives.

She and her niece Angie have also developed jewellery designs for the Culture to Catwalk fashion show in partnership with the National Gallery of Australia.

Krystal also featured among many artists in the Emerging Contemporaries at Craft ACT Canberra and the Aboriginal Bush Traders Bush Bling exhibition.

She believes storytelling is essential to her art and the ongoing future of Indigenous culture.

“When you share aspects of your culture, you are sharing a part of you,” she says. “An identity of a thousand voices echoing through the land, and within yourself. An identity flowing through the bloodstream of your spirit. The stories of our ancestors speak and live on by the rhythm of our tongue. We must not stop the rhythm of storytelling.”

Overall, 68 artists from across Australia have been selected as finalists in the awards to be announced in Darwin on 9 August.

Museum and Art Gallery NT Director Marcus Schutenko said the Gallery was thrilled to receive such an exciting range of emerging and established artists’ entries from each Australian state and territory.

“This year, the selection panel have identified a range of artwork across a large breadth of mediums,” he said.

Telstra CEO Andrew Penn said the awards were now globally a significant artistic celebration and enormous credit must go to MAGNT for providing such a brilliant showcase for the unique creativity and diverse talents of Indigenous artists.

“The quality and scope of the work this year is again superb. Whatever the style, whatever the medium, there is an extraordinary power and beauty in Indigenous art and I cannot wait to see it in person when the winners are announced in August.”

The winners of the 36th Telstra NATSIAA will be announced at an awards ceremony at MAGNT’s Bullocky Point facility on Friday 9 August.

Robyn Baer - 47 minutes ago
Drove back today. LOTS of potholes due to the rain. View
Jenny Drenkhahn - 7 hours ago
not to mention changes further South in the Bega Valley Shire; rebuilding in Cobargo and Tathra, Twyford Hall in Merimbula ;... View
Lifestyle 9

Doug Jackson - 59 minutes ago
Really bad plan. If you need a fence then you may not be paying appropriate attention to your child. Even with a gate somebod... View
Cary Elliot Johnson - 5 hours ago
Claire Lee Koo because its a democracy with varying opinions on an open column. View
Elizabeth Jones - 5 hours ago
I saw the petition but it wasn't clear it was supposed to be a few fenced playgrounds per region. I know being in an older pa... View
Opinion 67

@the_riotact @The_RiotACT
They may not be haute cuisine, but #local cookbooks are full of treasured family #recipes for everything from apple cake to homemade Irish liqueur. What's on your shelves? https://t.co/nHni3nSBrk (59 minutes ago)