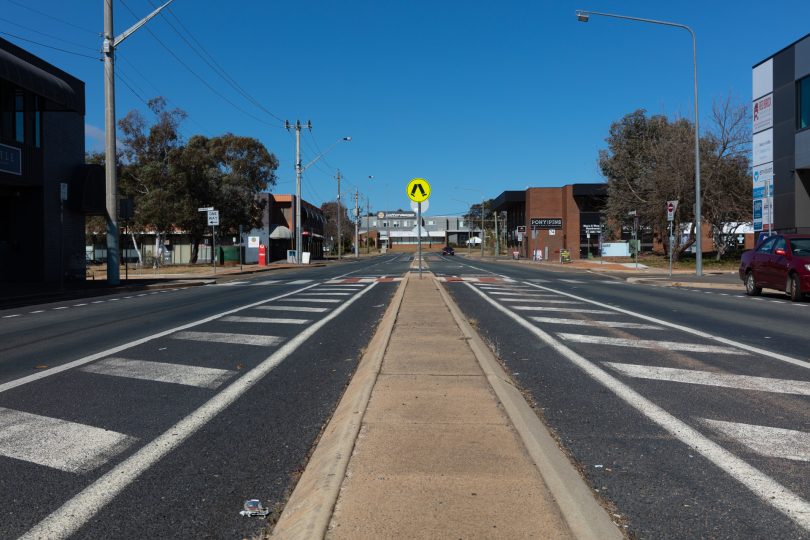 The new pandemic legislation would allow the government to impose restrictions on businesses, but not plunge the Territory into a lockdown (pictured – August 2021 lockdown in Phillip). Photo: Thomas Lucraft.

At the same time, the ACT Government is moving closer to passing COVID-19 specific legislation, allowing it to step down from a public health emergency.

The ACT has been in a public health emergency for more than two years, since 16 March 2020.

The committee which inquired into the lengthy Public Health Amendment Bill 2021 tabled its final report on the bill to the Assembly earlier this week.

At its heart, the bill will allow the government to continue to manage the impact of the pandemic with baseline health and social measures that can be implemented if and when required.

However, it will also increase the responsibility of the elected executive and provide strengthened human rights protections compared to what is currently offered under a public health emergency declaration.

Minister for Health Rachel Stephen-Smith indicated on Tuesday some amendments to the bill would be made on the basis of the committee’s report, and these would be circulated to the Assembly by the end of this week.

It was previously hoped the bill would pass the Assembly this week, but this is looking less likely.

Throughout the consultation process, the committee received a record number of submissions – more than 1000 – opposing the perceived overreach of the bill. However, the majority of these came from interstate and overseas respondents.

Many of them opposed vaccine mandates and any laws which would give the government the ability to impose them.

Other critics included the Australian Hotels Association ACT which suggested the powers retained under the new legislation were still too broad and would allow the government to severely restrict the operations of hospitality businesses.

However, it has been welcomed by human rights advocates.

There are now 42 patients in ACT hospitals with COVID-19. Of these, three are in ICU, although none require ventilation.

Yesterday, there were 42 people in hospital and three in intensive care, with one requiring ventilation.

As of yesterday, the double-dose vaccination rate for the ACT’s five-plus population was 96.7 per cent, and 72 per cent of residents aged 16 and older have received a booster.

Of ACT residents aged five to 11, 38.7 per cent had received two doses.

There are now 1180 people in hospital with the virus and 43 people in ICUs around the state.

Victoria has reported 11 new deaths overnight and an additional 10,259 cases of COVID-19.

There are now 244 people hospitalised with the virus, while 25 patients are in the state’s intensive care units.