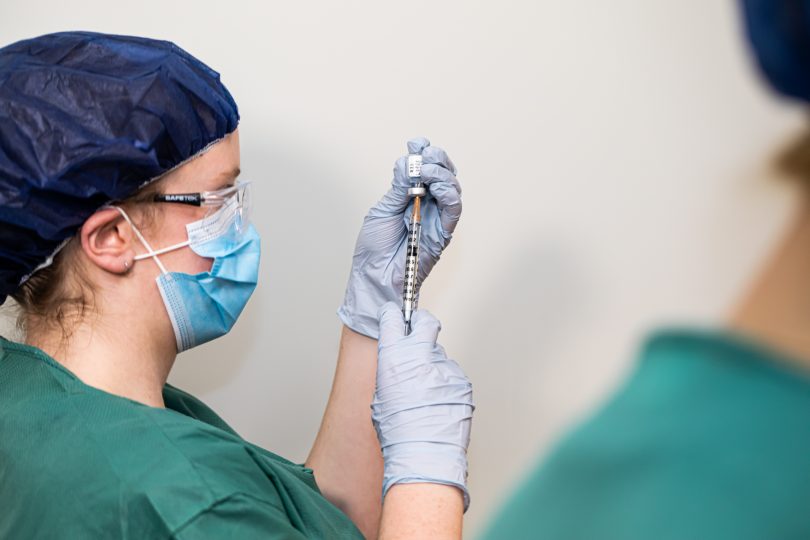 ACT Health is planning to ramp up its delivery of the Pfizer vaccine next month. Photo: Michelle Kroll.

A 66-year-old woman from the ACT is one of seven newly reported cases of blood clots and low blood platelets likely linked to the AstraZeneca vaccine, according to the Therapeutic Goods Administration.

Four cases of thrombosis with thrombocytopenia syndrome (TTS) – a rare event involving serious blood clots with a low blood platelet count – have been confirmed between 9 July and 15 July.

A further three, which includes the ACT woman, are listed as probable.

One of the seven cases is “critically unwell” in intensive care. All but one case – a 48-year-old woman – were in their 60s or 70s.

ACT Health confirmed that the 66-year-old is well and not in hospital, but would not comment further due to privacy considerations.

The new cases bring the Australian total to 83.

Three Australians have died from clotting related to the AstraZeneca vaccine and 24 have been treated in intensive care.

Six people across the country are currently in intensive care due to clotting.

The AstraZeneca COVID-19 vaccine is only recommended for people above the age of 60 due to the benefits of the vaccine outweighing the remote risks of clotting, according to the Australian Technical Advisory Group on Immunisation, Australia’s peak immunisation body.

AstraZeneca is a lemon. I think the fedeeral government is regretting the day they turned down the approaches by Pfizer to supply vaccine to Australia and insttead went with AstraZeneca because it could be manufactured here. Talk about backing the wrong horse!

The government has now been left with a glut of AstraZeneca because the public recognise how dangerous and risky it is and don’t want anything to do with it. No wonder the government is offloading it to Indonesia, Papua New Guinea and the Pacific Islands under the guise of overseas aid. Parking our problems onto other countries really isn’t a good look at all.

When it’s a faceless person the experts seem unconcerned with the ‘minuscule risk’. They wouldn’t be saying that if it was their loved one.

I assume you forcefully advise your loved ones never to enter a car because of the risk yes?

I mean the risks are far higher than these potential blood clots so you must be outraged that driving cars is still allowed.

When the deaths occurred of a person under 60 years then another under 50 years, immediate announcements were made that under 60 year olds would receive Pfizer vaccine. However, the recent death of a person in their sixties sparked no such concerned response. Currently all but one of the current cases are in their sixties and seventies, however governments continue to deny access to Pfizer for this age cohort. Thrown under the bus!

Probably because the risk of them dying of Covid is significantly higher than that of the vaccine?

Perhaps you’ve noticed the lockdowns that are currently in place? The advice against the Astra Zeneca vaccine is truly one of the biggest failures of public policy ever.

Well… It’s not really deny for the sake of it. They don’t have the stock of Pfizer to give to everyone.

I had the AstraZeneca shot and I’d do it again

@the_riotact @The_RiotACT
Did you hear about the bloke who was bitten by a #white-tail spider and doctors had to amputate his leg? It probably didn't happen, but the #spider's fearsome reputation persists without a shred of evidence. Damien Larkins explains https://t.co/5I2pJBKyzw (11 minutes ago)