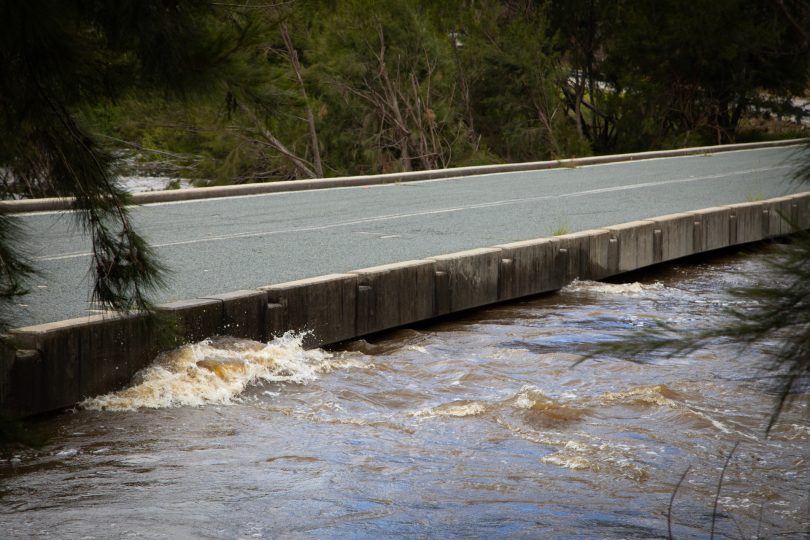 With all dams at 100 per cent capacity and as much as 45 mm of rain expected today, the ACT State Emergency Service is advising the community to be prepared for localised flooding.

In the 24 hours from 9:00 am Thursday (25 November), the ACTSES responded to over 100 callouts for assistance and had more than 20 requests outstanding as of 8:30 am this morning.

Alongside crews from ACT Fire & Rescue, ACT Rural Fire Service and Transport Canberra City Services, they have been called out to problems ranging from localised flooding to leaking roofs and fallen trees.

Calls came from North and South Canberra, but Kambah was mentioned as one of the worst-affected areas.

In Queanbeyan, the low-level crossing near the Town Centre has been closed as river levels continue to rise. Saturated catchments and a full dam leave the SES Queanbeyan unit with significant flooding concerns ahead of another day of rain.

The region recorded between 30 mm and 50 mm of rain yesterday across the different areas. The rain means the ACT has now officially recorded its wettest November on record, and with more rain today, the region will edge closer to being the wettest month on record.

To check all updated road and path closures ACT-wide, head to the City Services website.

The community is reminded to never drive, walk or ride through floodwaters.

If you require assistance during a storm or flood, call the ACT State Emergency Service on 132 500. In a life-threatening emergency, call Triple Zero (000).

Lyn N Chris Williams - 8 minutes ago
Corruption corruption corruption to worried about their greedy business friends who have no intention off keeping Australian... View
Jilly Beans - 42 minutes ago
Michael Miitze yes true- consultants always look so surprised when you take them to task on something! View
Michael Miitze - 52 minutes ago
Jilly Beans agreed, but the APS does itself no favours. They are so passive and poor at contract negotiations and management. View
News 140

Herman Riet - 32 minutes ago
Paul Muscat There is a group on Northside in the new suburbs called Friends of the Park I tried ringing & leaving message the... View
Troy Dare - 2 hours ago
Rien Wiersma - Most of the grass we’re talking about here is weed species...which invade the bush capital. And you’re rig... View
Seti Saenz - 2 hours ago
Trish Hunt It has been raining a lot so it makes sense it is so tall. We are building a house and the builder has to keep can... View
News 21

JC - 13 hours ago
As was the case with delta the over reaction as you put it is just a pause to buy time to see how big a problem it really is.... View
HiddenDragon - 15 hours ago
With Australia's international border being "thrown open" (as tonight's TV news reports are reminding us) from next Wednesday... View
jorie1 - 17 hours ago
Close the international borders to everyone but Australian citizens! And have strict quarantine for Aussies coming in here .... View
Opinion 60

Capital Retro - 17 hours ago
Looks better than a Tesla any day. View
show more show less
*Results are based on activity within last 7 days

The housing market in Canberra is absolutely back with a vengeance. There were a record number of auctions last week:...
Public Sector 34

Of all the legislation that the Morrison Government has decided to prioritise, its voter identity bill is arguably the least...
Public Sector 34

@the_riotact @The_RiotACT
The @CPSUnion is concerned about an ACT Government data breach that potentially enabled #sensitive health data of 30,000 ACT #publicsector employees to be publicly available for three years https://t.co/N5EhD2peS6 (1 hour ago)