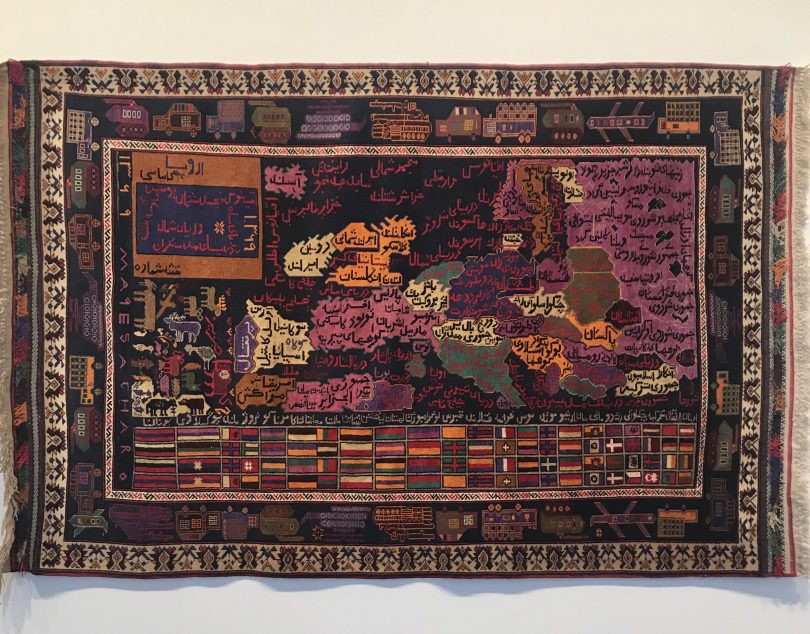 A war rug with a map of Afghanistan’s provinces. Photo: Genevieve Jacobs.

Nigel Lendon’s first visual memory is as clear today as the moment it happened, decades ago in Adelaide.

“I was four years old, and an elegantly dressed Afghan man came to the door with carpets under his arm. My mother was completely seduced by the beauty of the rugs,” he says.

Lendon still has the rug that began a lifetime of collecting. And a passion began that led to the current Drill Hall exhibition at the ANU, I weave what I have seen: the War Rugs of Afghanistan.

Afghan war rugs are traditionally woven but incorporate design elements from the war-torn nation’s recent history. Tanks, helicopters and Kalashnikovs, Soviet invaders, the US and Taliban forces and events including the 9/11 attacks appear on the rugs.

From the start of armed conflict in Afghanistan during the late 1970s, weavers began including the images in traditional designs or more graphic representations. Designs were drawn from many sources, including political posters and major conflict figures.

Lendon saw his first war rug decades ago. It belonged to longtime friend Olive Bishop, who’d found it in a rug shop when the pieces were just beginning to emerge as export items (the rug is in the exhibition and Lendon believes it’s the first of its kind in Australia).

The exhibition is the culmination of a longstanding research project between Lendon and art historian Tom Bonyhady, who is also publishing Two Afternoons in the Kabul Stadium: A History of Afghanistan Through Clothes, Carpets and the Camera this week.

Tracing the 20th-century history of Afghanistan, the book describes the deep origins of today’s conflict, reaching back to the modernising King Amanullah in the 1920s. 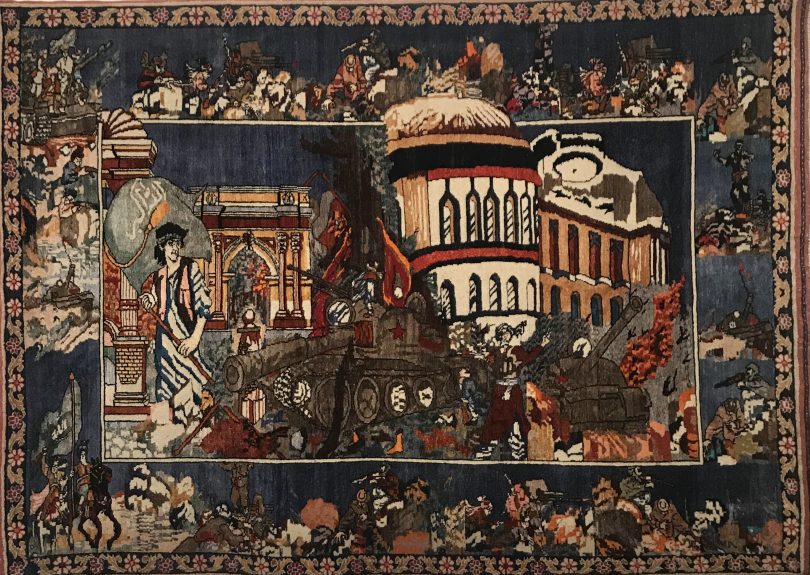 “I’m interested always in the transition between tradition and modernity, the historical moment when that happens,” says Lendon (an earlier, smaller, war rug exhibition was curated by the pair in 2003).

“When we started seeing and recognising these pieces transforming from traditional carpets and began exploring where they came from, we also understood that nobody had done the homework on them.”

Lendon and Bonyhady began looking for war rugs well before the internet made the process easier. Forming networks with private collectors overseas, they received an ARC grant to research the international collection. It became a consuming passion for both.

Lendon explains that rugs are traditionally made by women and children and family groups. The war elements began appearing when the Soviet forces invaded, although it’s an open question whether they are deliberately incorporated as an economic enterprise, or more to do with people wanting to communicate their experiences to the outside world.

He points to anthropological research with refugee rugmakers in Iran and Pakistan who say that the intention was clearly to document tumultuous events.

“It seemed fascinating to us that no institution had recognised that this was an art history evolution, not just tourist art,” Lendon says. “These anonymous producers were making rugs for us to see and understand what was going on in their lives.”

The exhibition ranges from tightly woven village rugs where tanks and helicopters are almost abstract elements to visceral representations of conflict.

Maps of Afghanistan, images of King Amanullah and the assassinated Ahmad Shah Massoud and even Uncle Sam appear, although the rugs makers themselves are anonymous. But among the interviews for the project, Lendon and Bonyhady spoke to a familiar voice, that of Oriental Bazaar owner Sabur Fahiz from Fyshwick.

“These remarkable pieces of art are beautiful to gaze upon even though they record the terrible war that continues to this day. This exhibition and catalogue allows us to acknowledge the men, and especially the women, who made these works of art,” he says.

I weave what I have seen: The War Rugs of Afghanistan is at the ANU Drill Hall Gallery until 15 August.