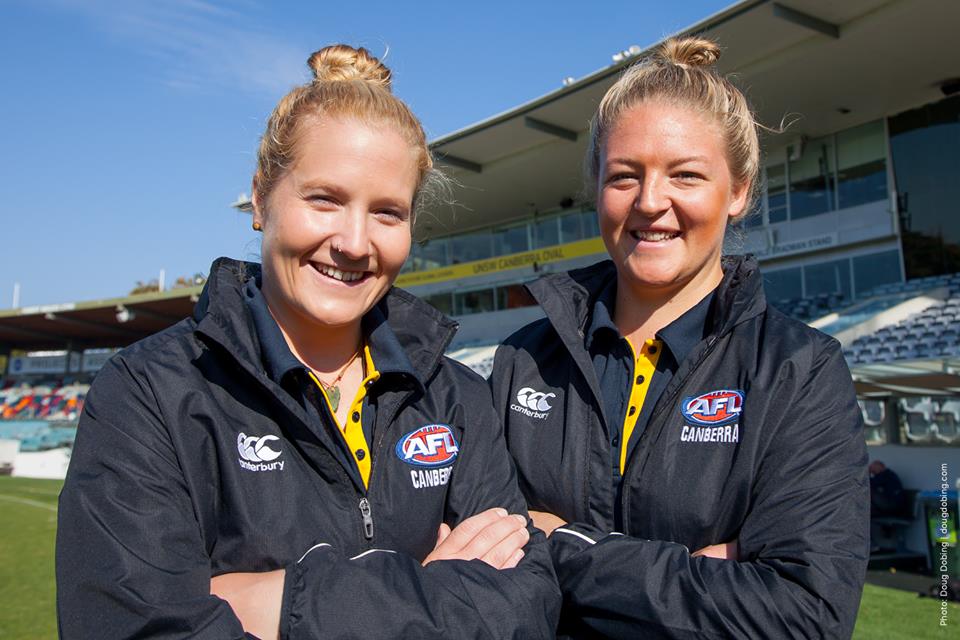 “It’s a big honour to all come together, to break down those barriers and to really showcase what ACT AFL has to offer,” said Co-Captain Hannah Wallet.

“I think [the ACT is] often a bit of a forgotten state in terms of AFL. And we work really hard to bring that reputation up, in terms of how we play footy and the strengths that we have right throughout the grassroots program,” Ms Wallet said.

“We want us to be recognised as an AFL state and we want to play like that.”

Ms Wallet said that she has grown up playing AFL in the ACT competition and has a fair idea about the strength Riverina brings to the footy.

“They play a hard contested game, they run at the ball and they are very physical. So we are not expecting anything less from them from a representative side,” said Wallet.

“We know a couple of ACT players that will be transferring to the [Riverina] side and one of our team mates from GWS Giants Clare Lawton will also be playing.”

“If anything is to go by how she plays, then [Riverina] will be bringing a pretty hard game.” 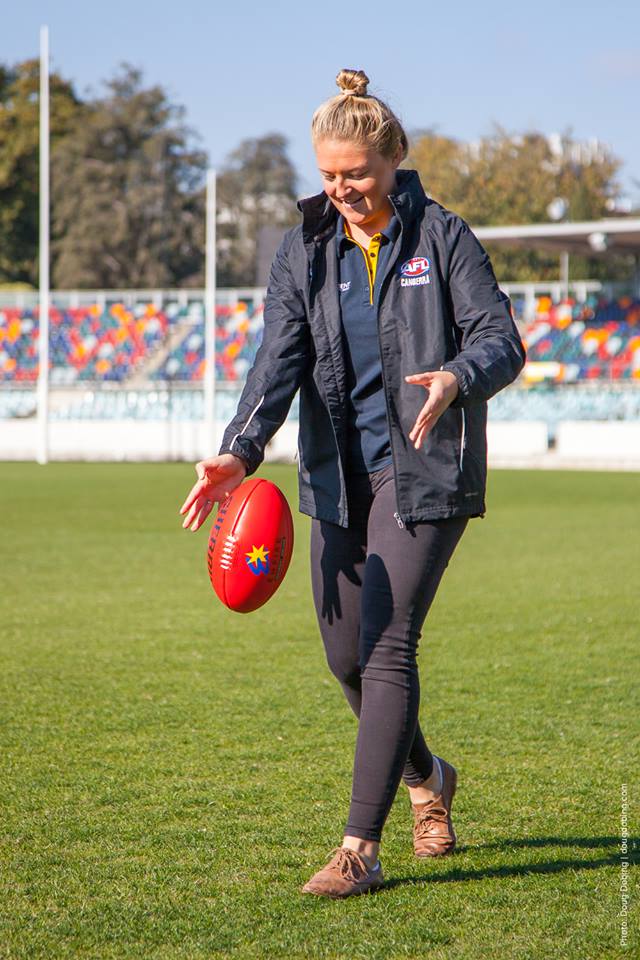 Co-Captain Britt Tully said that training, earlier this year, with other elite players for the AFLW Premiership season, must bring something different back to our local clubs.

“I can tell already, just training with ‘Wally’ and Ella [Ross] that they’ve improved, even from last year,” Tully said.

“And we can read each other a lot. So, hopefully we bring that to the other players in our team and they can learn some things of us. ”

Brit Tully said there is a new coaching team for this weekend’s AFL NSW/ACT Women’s Representative match in Wagga.

Following the success of the AFLW Premiership season earlier this year, there has been a surge in interest in youth girls and women’s AFL locally, said Wallet.

“When I got back to Belconnen pre-season, there were 47 girls training in the pre-season, trialling out for the women’s first grade team,” Wallet said.

“I know that Gungahlin, Queanbeyan, Ainslie and ANU all had had similar numbers,” she said.

“There was talk of us trying to get together extra teams, just so that these girls, who just wanted to play footy.”

“That was really exciting to see. It was cool to see how just the very first season of AFL Women’s has rubbed off on community footy.”

Tonight the Co-Captains will go head to head when Belconnen Magpies v Gungahlin Jets at the Gungahlin Enclosed Oval at 7:00pm. Entry is free.

“We’ve always had a rivalry with Belconnen,” Tully said.

“At the same time we are all friends. We will go hard in the game but I think afterwards it won’t matter. Then we will come together,” she said.

“We’ve both got a large proportion of players in the ACT [Representative] side. So we want to take care of each other as well for the weekend.”

“We’ll probably just keep our eyes on Wally and try and keep her down. Then we should be right.” 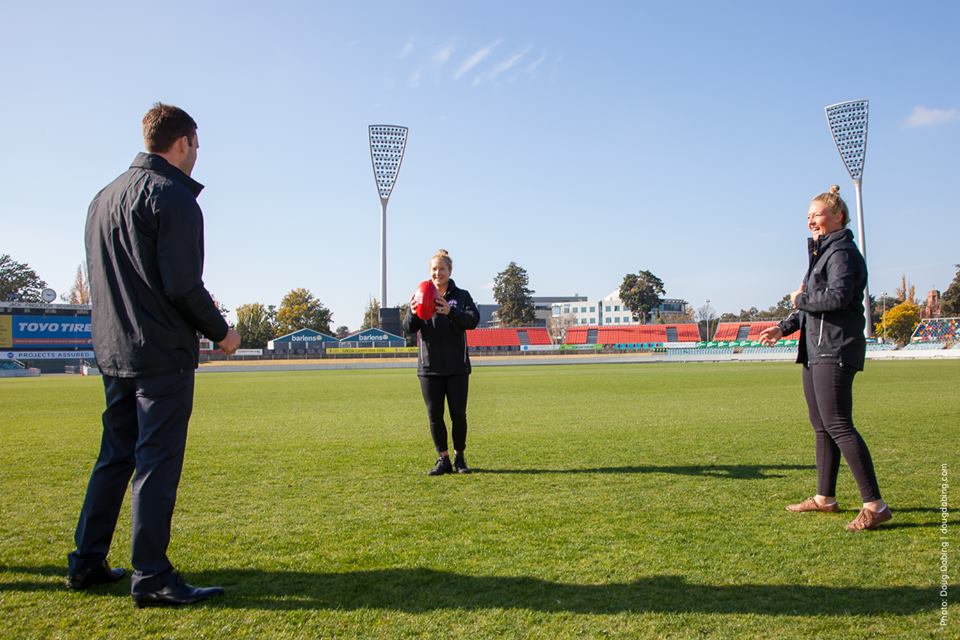 AFL Canberra Community and AFL Canberra Operations Manager Gary Lawless said, on the back of AFLW competition earlier this year, there has been a surge in youth girl’s registration in the local competition.

Mr Lawless said this year’s competition in AFL Canberra has an additional two Divisions, the U10 and U12 Youth Girls, to compliment the U15 and U18 Divisions that they had the year before.

“We’ve actually seen a rise in 13 new teams in the youth girls divisions, mainly in U10 in U12,” Mr Lawless said.

For more information about playing or getting involved in AFL Canberra go to aflcanberra.com.au.

Doug Dobing is a freelance journalist, photographer, public servant and current affairs presenter on 2XXFM Wednesday SubjectACT. You can find him on Twitter @DougDobing.

TheAxeMan, yes the AFLW season set a high standard. I’m also looking forward to how it develops for next season. The bonus for ACT is that we have a few AFLW players in the local community competition.

I really enjoyed the AFLW competition of football. I hope this continues the good standard set

Darron Marks - 5 hours ago
Maybe we can move it and rent it out like some kind of mobile field hospital. Put it on the border of NSW and the ACT 🤷‍... View
Jorge Gatica - 8 hours ago
Max Robinson news flash it’s being used, but not for it’s was built for View
Matilda Sanchez - 8 hours ago
As long as this virus is around and we have no control, we need it. It would be completely stupid to not have it 😒 View
Property 2

Ash Vu - 6 hours ago
Liz Phillips perfect timing View
Marcia Denman - 6 hours ago
They deserve everything they get and more, plus loads and loads of thankyou’s from the whole community View
Connie Ginger - 8 hours ago
Well deserved! Thank you for your amazing work. View
What's On 11

Debbie Crane - 7 hours ago
Bring back the drive in movies View
Jennifer Bradley - 9 hours ago
Do they have heaters, like they did in the olden days? Just brilliant in Canberra, where otherwise you couldn't keep the inte... View
Alessandro Surian - 10 hours ago
Sepi Moradi now we can go to the cinema with bubu! View
Food & Wine 113

Emma Corrigan - 7 hours ago
Jaeger Vallejera Juliana Vallejera Shane Richards omg yes. View
Jess Ha - 7 hours ago
Definitely, although let's not go so early to give them time to open 😅😅 View
Tamika Jade - 9 hours ago
Haha me neither View
Motoring 24

Bill Gemmell - 8 hours ago
John Madelly haven't forgotten nearby NSW. But, that is the very reason why the feds should be kicking the can so to speak.... View
Ashley Wright - 10 hours ago
Edd Dornan can’t sell something they don’t own. You do realise this don’t you? View
John Madelly - 11 hours ago
The bridge over the Molonlo at Coppins Crossing is the completion of a vital road network between Molonglo, Belconnen and bey... View
Opinion 11

Maria Greene - 8 hours ago
Why am I reminded of the Grand old Duke of York? Building white elephants with extorted ratepayer money and cancelling good b... View
Rob Thomas - 10 hours ago
what about trees?? View
Fiona Carrick - 11 hours ago
Having a Master Plan to rebuild the Canberra Hospital properly would also be a good idea to keep construction workers going. View
show more show less
*Results are based on activity within last 7 days

A Canberra man will face the ACT Magistrates Court today charged with the murder of a 44-year-old man who died following...
Food & Wine 113

Tighter restrictions will be placed on the number of people allowed in NSW pubs from today (14 July), but the...
Property 5

The long-awaited Gungahlin cinema development is set to break ground next month after the appointment of the company to build...
News 16

With the official reopening of the Queensland border yesterday, flights to and from Brisbane and Canberra have recommenced, just in...
Motoring 24

Moves to duplicate a 1.6 km section of Tharwa Drive in Canberra's far south will buoy residents regularly stuck in...
*Results are based on activity within last 7 days

Crepe-lovers of Canberra, get excited! A new café dedicated to churning out crepe perfection has landed! Not all crepes are created equal,...
Opinion 48

There is a convention that former political leaders are supposed to stay out of the spotlight once they have left...
News 57

Chief Minister Andrew Barr has stepped into the row over Geocon's plans to build a six to eight-storey apartment building...
News 30

The ACT Greens will provide the option for people to take on a four-day work week and more work-from-home opportunities...
News 52

A troop of former Australian War Memorial officials opposed to its controversial $500 million redevelopment will line up before a...
News 29

Moves to duplicate a 1.6 km section of Tharwa Drive in Canberra's far south will buoy residents regularly stuck in...
News 18

A Canberra Liberals candidate appears to have been forced out of running in this October's Legislative Assembly election for not...
News 20

@The_RiotACT @The_RiotACT
Teen Jesus and the Jean Teasers started as a competition to find the worst band name possible. Now the Canberra born-and-bred outfit is on the verge of something big - once COVID-19 gets out of their way https://t.co/opxTCbCpTJ (5 hours ago)

@The_RiotACT @The_RiotACT
The arrival of e-scooters has been greeted with equal parts delight and despair according to our polls. This week we're wondering whether the Palace letters have prompted republican stirrings over the Queen's role in our national affairs https://t.co/0TLC0zIF4N (6 hours ago)

@The_RiotACT @The_RiotACT
Wondering what to do over the next few days? Get your creative juices flowing, check out a pop-up wine bar in Braddon, or try your hand at flower arranging https://t.co/AT6w7KfvkX (8 hours ago)