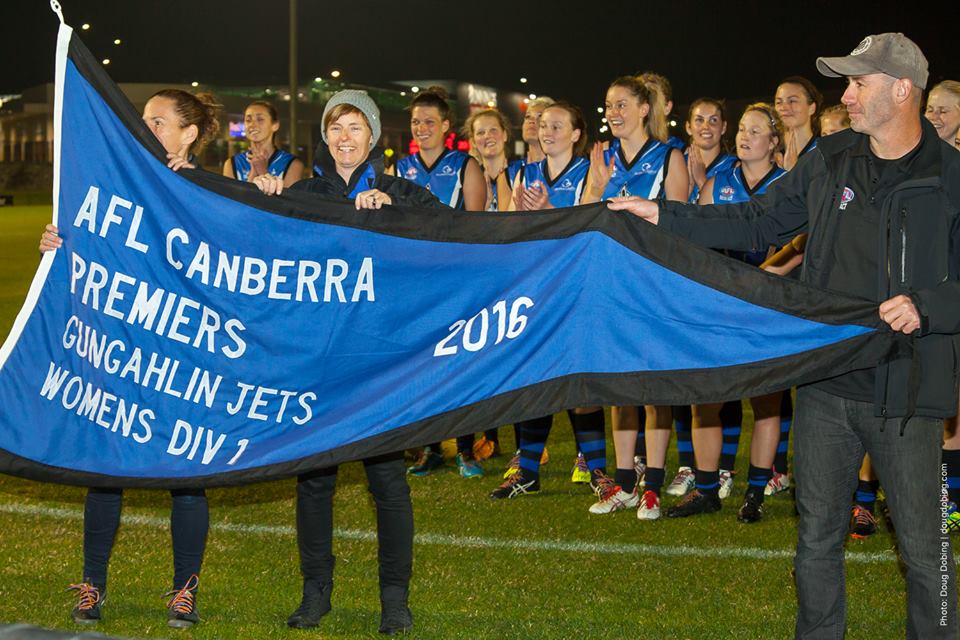 Talking about the 2016 Premiership season, Mr Clarkson said: “In my eyes we weren’t underdogs, but in everyone else’s we probably were.”

“[In the early days] we were the team being beaten 100 to 200 points every week. Now we’re the ones with a target on our back. It’s a good place to be,” said Mr Clarkson.

In the lead-up to Friday night’s clash against Molonglo Juggernauts, Mr Clarkson said he knew his team would have high spirits after the unveiling of the Premiership flag. 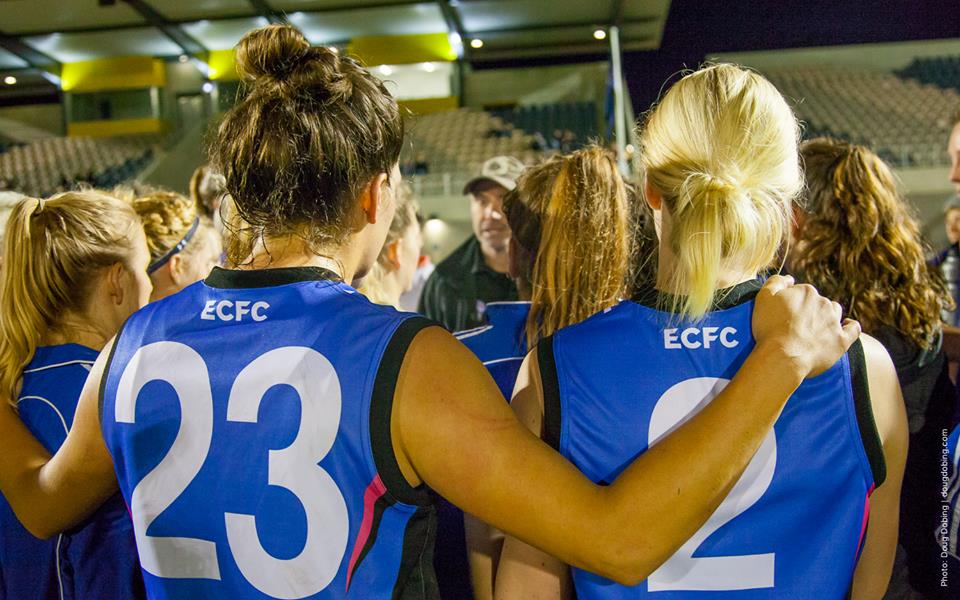 Mr Clarkson said he did expect a physical and competitive game from the Molonglo Juggernauts as they are the reigning 2016 AFL Canberra Women’s Division 2 Premiers and have a new coach.

In the opening minutes, Juggernauts showed their strength scoring a behind, followed by a goal.

Mr Clarkson said that the first quarter was the highlight of the game with clean football in slippery conditions.

“Just to see the movement, the linking passages of play and to finish off kicking five goals, six [behinds]. That’s 11 scoring shots in one quarter. That was pretty amazing,” he said. 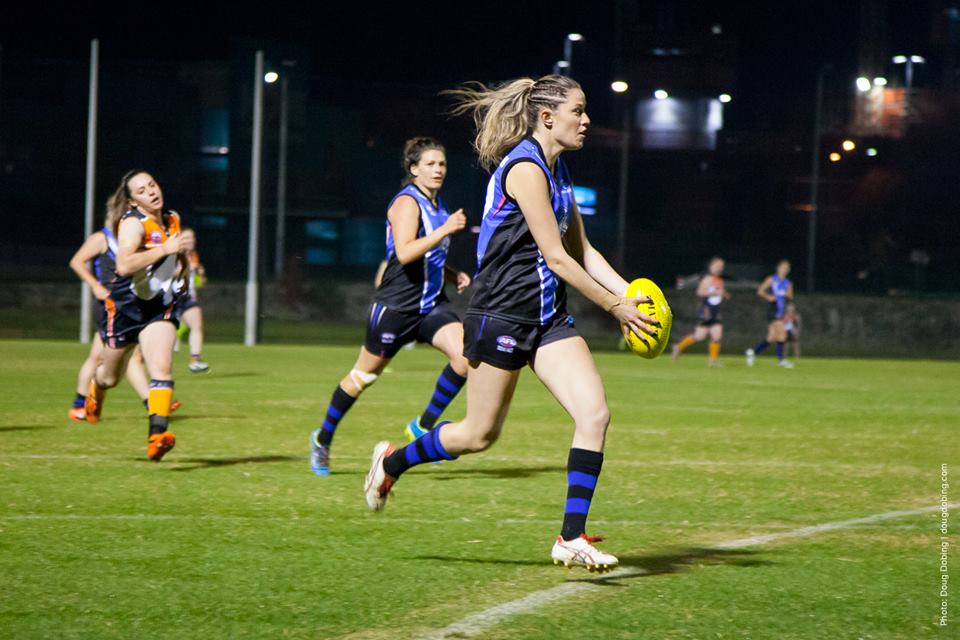 “I’ve never seen a Jets Women’s team play a quarter of football in that calibre. That was women’s football at it’s best.”

The Juggernauts showed a voracious attempt to win back the game but the Jets backline showed their strength. 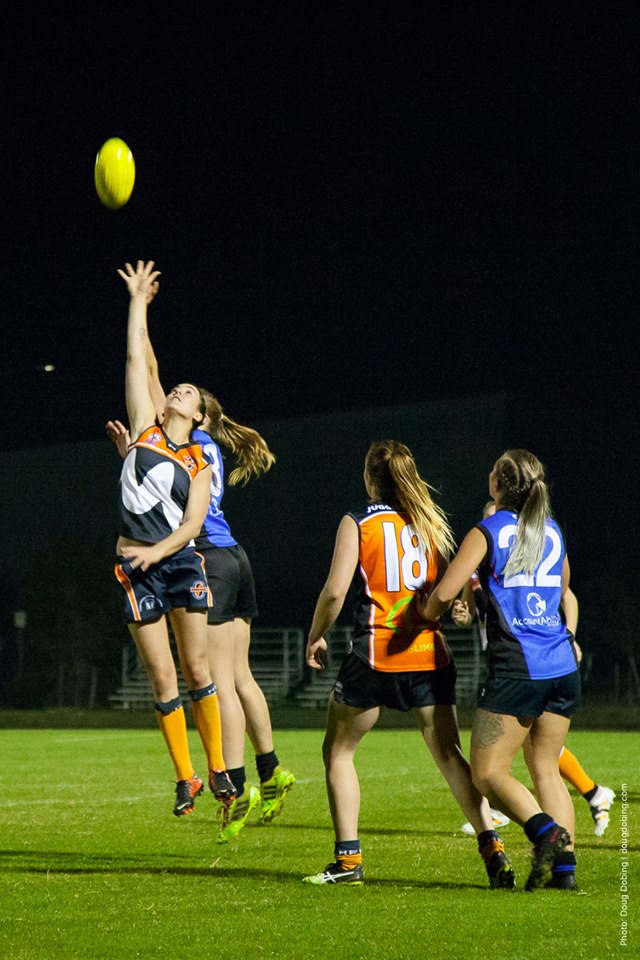 Following the NAB AFL Women’s Premiership season earlier this year, there has been an influx of new players to the local AFL Canberra competition.

“As witnessed in the first three games this year, having such an influx of first-year players they’ve [already] bought into the culture. You can see from the results already, three [wins to zero losses].”

By Round 5 of the AFL Canberra Women’s competition, the Jets have only played three games. They had a bye in Round 2 and have one catch-up match to play.

This week, Gungahlin Jets will play their ‘catch-up’ round against Belconnen Cats at Gungahlin Enclosed Oval on Thursday 18 May 2017 at 7:00 pm. Entry is free.

Mr Clarkson said that the AFL Canberra Women’s competition expanded to 11 teams in 2017, with Cootamundra Blues joining this season.

“The competition in Canberra is strong,” he said.

For more information about playing or getting involved in AFL Canberra go to aflcanberra.com.au.

If you play or enjoy watching AFL women’s games let us know what you enjoy about the game in the comments below.

Doug Dobing is a freelance journalist, photographer, public servant and current affairs presenter on 2XXFM Wednesday SubjectACT. You can find him on Twitter @DougDobing.

Thanks for asking Pink Little Birdie. 1n 2016 there were two divisions for women. This year, AFL Canberra competition has only one women’s division, Div 1. For the youth there are several divisions U10, U12, U15 and U18 girls.

Does that mean that there are now 3 divisions of Women’s footy? Div 1, Div 2 and youth?