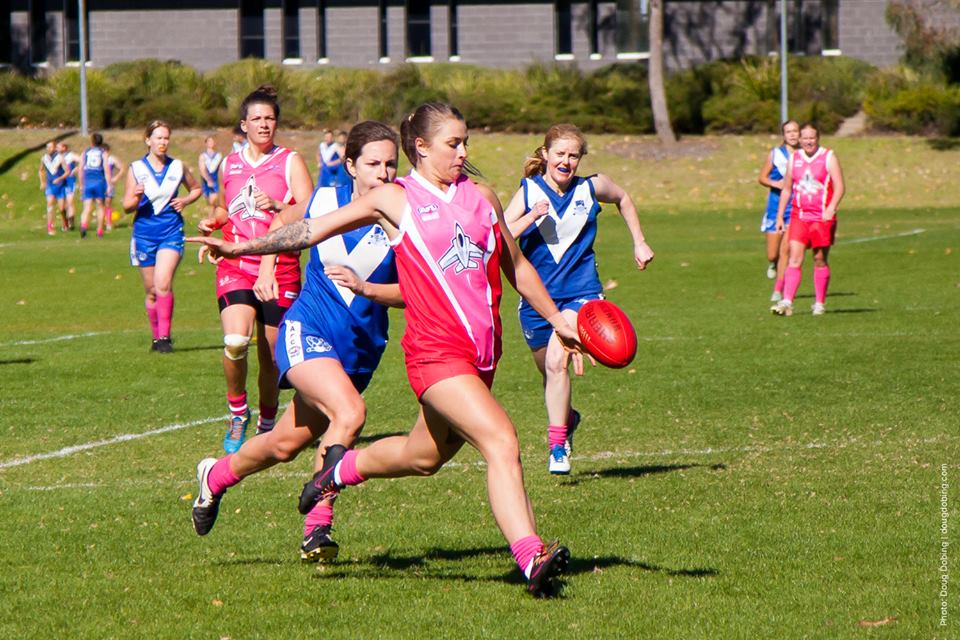 President of Gungahlin Jets, Peter Kocmar, said: “Pink Footy Day is all about breast cancer. We all have someone affected by breast cancer”.

“So it’s really an important day to raise money and raise awareness,” he said.

President of ANU Griffins, Caitlin Roy, said: “We were lucky enough, five years ago, to have GWS Giants come down in their inaugural year and celebrate the first ever pink footy day between Gungahlin and ANU.”

“The tradition has lived on ever since,” she said. 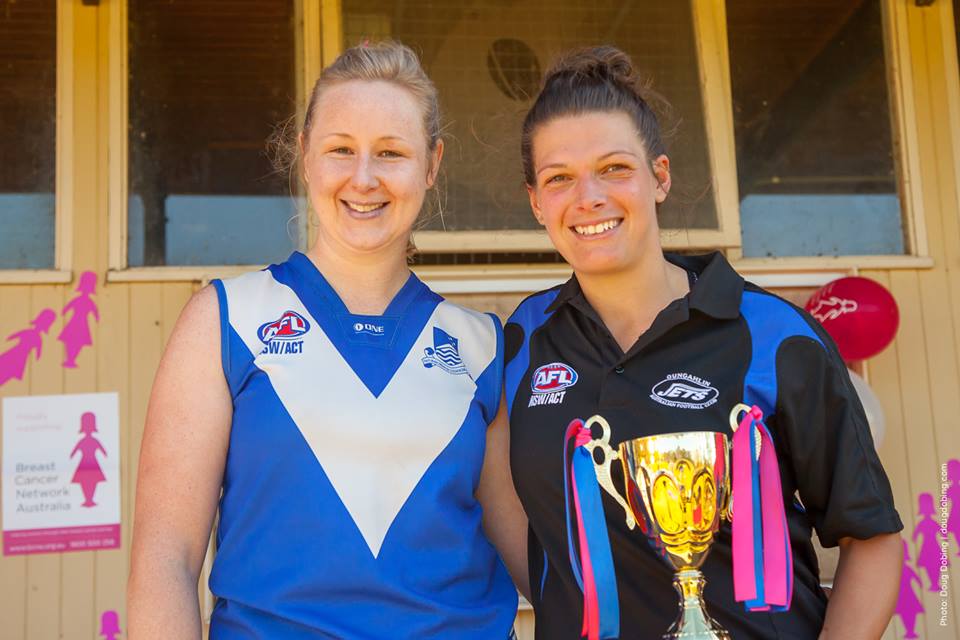 “We usually play around Mother’s Day. We’re great friends, our clubs. We raise lots of money,” she said.

“Lots of people come down and it really is a great family day.“

“It’s very rare that you have two teams that have a bond together in women’s football. We’ve formed a terrific relationship with ANU,” he said.

“We also play for the cup. It’s something we’ve held ever since I’ve been involved with the club and ever since pink footy day has been around.”

“It’s something I don’t want to lose in a hurry because it does mean a lot to us.”

“I’ve never had anybody close or in my family that has had breast cancer so [Pink Footy Day] makes me aware of the situations some families are put under as well.”

ANU Griffins Excellence in Sports Officer Anna Wilson said: “All the proceeds of our bake sale and our handball competition are going to support those affected by breast cancer”.

“Breast cancer is the most common cancer diagnosed in women,” Ms Wilson said.

“Every day in Australia, 42 women are told they have breast cancer and seven will lose their lives to the disease.”

A known genetic mutation or a strong family history accounts for approximately 5-10 per cent of breast cancer. 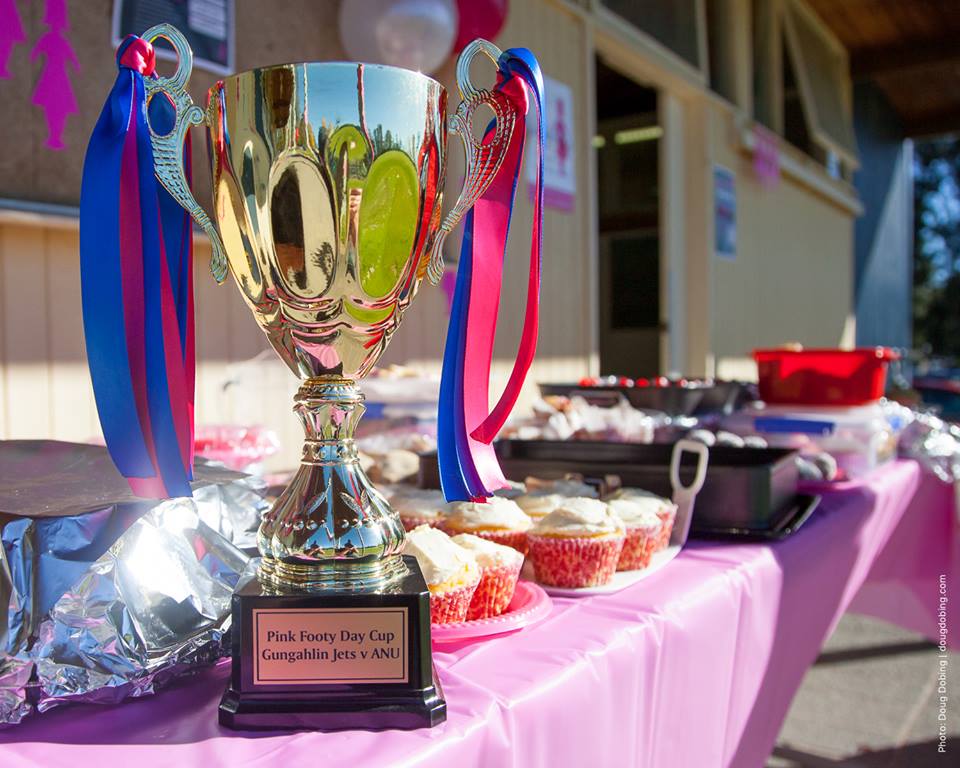 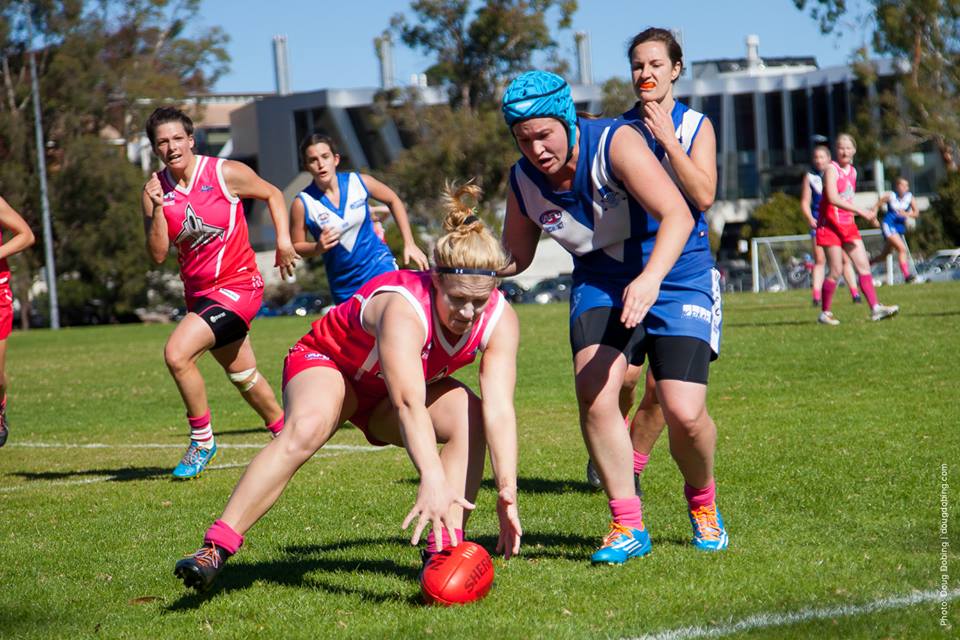 Photos and video by Doug Dobing. The second photo from the top is of ANU Griffins President Caitlin Roy and Gungahlin Jets Women’s Captain Rosie Pink with the cup.

Doug Dobing is a freelance journalist, public servant, photographer, SubjectACT presenter and producer on 2XXFM 98.3. You can find him on Twitter @DougDobing.

A very informative article highlighting an important cause.

Robyne Mitchell - 7 hours ago
What about the people who lost their livelihoods and houses as a result of this fire? View
Louise Flood - 7 hours ago
Robyne Mitchell and the Blue Mountains fire that started with in Lithgow View
Martin Budden - 7 hours ago
Phill Wall when you realise you've made a mistake the first thing to do is own up to it, then you can fix your procedures to... View
Community 2

Kirsty Ross - 7 hours ago
Fiona and Epilepsy ACT have been a great support to me since my son was diagnosed with Epilepsy. View
Anne Munns - 7 hours ago
Sally Carter....FYI:-) View
News 35

Martin Bradley - 7 hours ago
With the exception that programs within the prison focussed on rehabilitation can always be improved and you could call that... View
show more show less
*Results are based on activity within last 7 days

@The_RiotACT @The_RiotACT
A dragway gets the thumbs up from many of you. And on road matters, this week's poll asks if cyclists get a fair go on Canberra's roads? https://t.co/EC199gbmZv (5 hours ago)

@The_RiotACT @The_RiotACT
From riding the miniature railway to learning how to photograph some amazing animals to riding a penny farthing, there’s something for everyone to do in CBR this week https://t.co/3jxDq78Nat (6 hours ago)

@The_RiotACT @The_RiotACT
As new photos emerge of the Orroral Valley bushfire, Andrew Barr says the ACT won't engage in a blame game with the ADF https://t.co/TL98OdWXQs (8 hours ago)