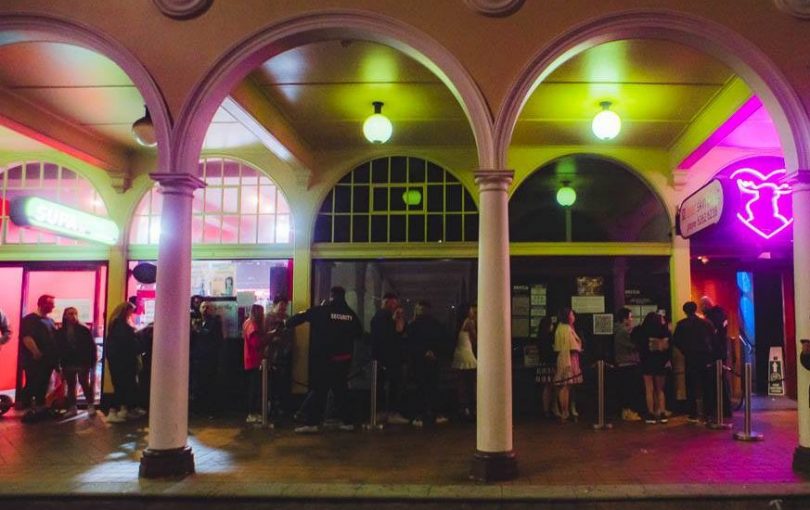 Dancing is back in the ACT and venues like Mooseheads are ready for a high night. Photo: File.

Businesses in Canberra and over the border have welcomed the news there will be moves like Jagger along with the vertical consumption of food and drink, and at-capacity venues this evening.

The ACT Government this morning announced a scaling back of public health settings to move the Territory almost in line with NSW.

The loudest cheers came from the hospitality industry, which has found itself most adversely impacted by restrictions such as density limits, the ban on dancing and singing and the requirement to remain seated while dancing and drinking.

Australian Hotels Association Association ACT general manager Anthony Brierley said the industry is now “tired of needing to rely on government support” and more than ready to get back to business after 704 days of restrictions hampering usual trade.

READ ALSO Death of man in his 20s with COVID happened some time ago; ACT records 561 cases

“The industry will crack on with doing what we do best – providing safe and vibrant dining, drinking and entertainment options for Canberrans. [We] will grab this chance to pay back our debt, grow our workforces and rebuild our businesses,” Mr Brierley said.

Within hours of the announcement, Mooseheads Canberra posted a statement to social media celebrating the news: “After almost TWO long years of restricted trading we can FINALLY get back to doing what we do best! Today feels like a brand new day and my goodness are we gonna make the most of it!”

Similarly, The Boardwalk Bar and Nightclub in Belconnen posted: “After almost two years we will finally have our full capacity back with dancing allowed from 6 pm today! Bring it on!!!” 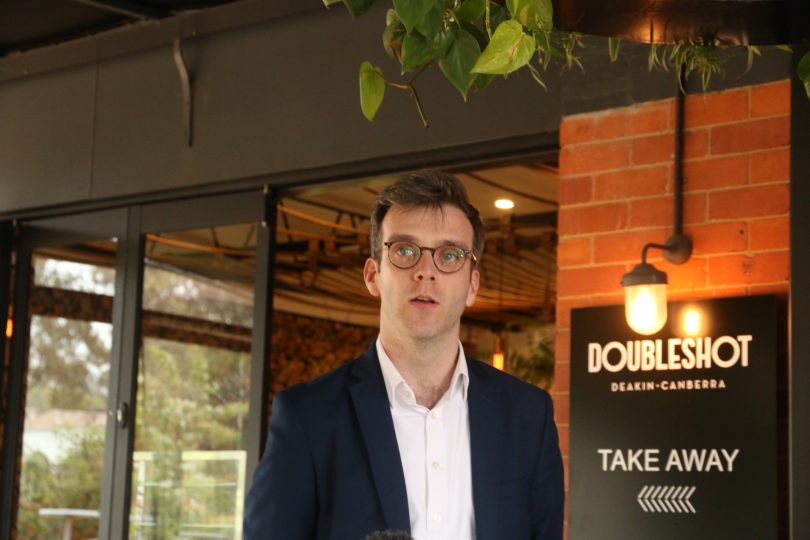 For Eastlake Football Club CEO Anthony Ratcliffe, the changes hail a welcome return to normality, particularly with the removal of density limits.

“Allowing people to eat and drink while standing up will make the place feel a lot more normal,” he said.

The function centres at the Eastlake clubs in Calwell and Gungahlin have been serving food and drinks since lockdown lifted in the ACT last year, but Mr Ratcliffe still isn’t optimistic for a quick fix just yet.

“People were less willing to risk going out as the numbers of cases grew, even though restrictions had eased. Business hasn’t really bounced back. It’s going to be a long, slow road while people get the confidence to go back out.”

Over the border in NSW, even more restrictions have been scrapped as of today, with QR codes now mandated in fewer settings. The use of masks will be scaled back from next Friday (25 February).

Cafe and restaurant Thirty 4 owner and chef Mert Toplu said he has been enjoying “pretty steady” business since late October, but is now anticipating a 15 to 20 per cent increase in business. 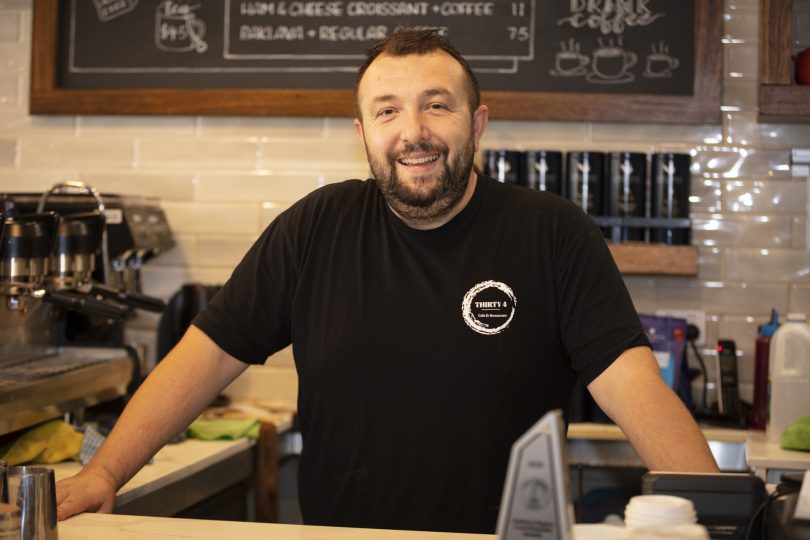 Mert Toplu is anticipating a 15 to 20 per cent increase in business when lockdowns end. Photo: Thomas Lucraft.

“Talking about Omicron and COVID and check-ins and masks has some sort of psychological effect on people’s minds … People are shy to go out. Lifting restrictions will make people more relaxed and confident.”

He said he will continue to generously space the tables and chairs and encourage staff to wear masks in a bid to avoid losing workers to COVID-19 isolation.

“We had this conversation yesterday as a team, and they’re all saying that they’re not going to take them off for a while.”

But it’s not just the hospitality sector that has been impacted, either.

Canberra Business Chamber CEO Graham Catt said the business community at large welcomed this morning’s announcement. He’s hopeful the change in advice regarding the return to work, in particular, will provide a lifeline to many businesses.

“It’s a critical move to support the [economic] recovery,” he said.

Mr Catt acknowledged how difficult the start of the year had been for many businesses which did not see their usual levels of trade due to the “triple whammy” effect of the Omicron wave – staff shortages, a lack of community confidence and remaining restrictions. 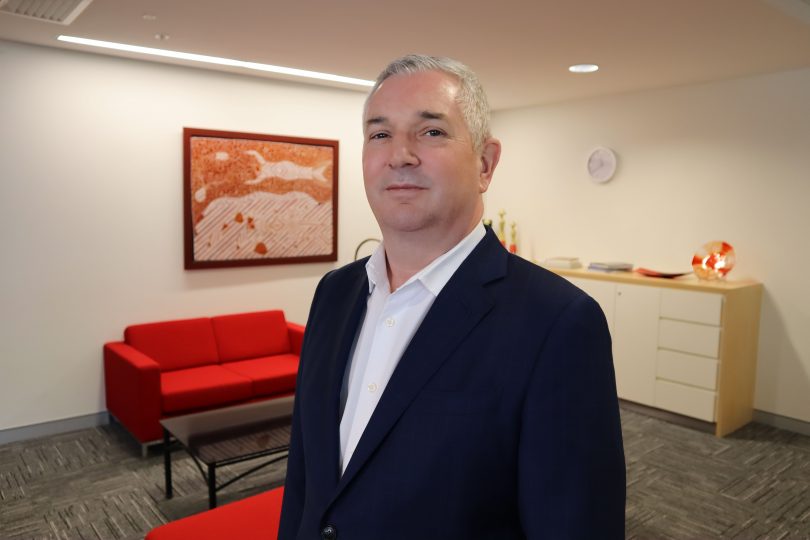 But he said it’s important to remember some businesses will still need targeted support measures in the coming weeks, which “needs to stay on the table”.

The ACT Government has also urged a degree of caution.

Chief Minister Andrew Barr indicated today should not be characterised as ‘Freedom Day’, nor does it signal the end of the Territory’s pandemic management.

Mr Barr said things can change quickly and “we could be at any given time, back introducing the reintroduction of restrictions if there’s a new variant or if we start seeing a significant spike in cases”.

Authorities have previously expressed concern about the upcoming winter and flu season. Further announcements about scaling back the indoor mask mandate and the use of QR codes to check-in are expected next week in the ACT, with changes likely to come into effect on Friday.

Awesome news please do not be like NSW & go stupid. If you venture out & it’s packed walk away. Before you know it you will be in lockdown again. With any luck dj’s can get together & organise an outdoor venue. So the young & numpty can get on with it. I know business is chomping at the bit too get back to normal but last thing you need is all staff coming down with Covid. Remember the last time restrictions eased you had an influx of Sydney people full of Covid hitting town & everything got shut down again. People should be patient & wait have a big bbq at home first then go out in a weeks time on the town, enjoy

Well we headed to Manuka for cake and coffee and nothing open at 10.30pm. 😩

Still miss the Phoenix though! 🍻❤🤗

Hopefully no more COVID strains ! We still have around 500 cases a day!🤔

Go for it Ken Behrens 😝

Dancing with a free side of omicron

Can we bring back the Private Bin?? 😂

Chris Olsen can we not?

Lauren go get it

Louise getting ready for a big night at Mooseheads girls 🤣

Get lose at mossie