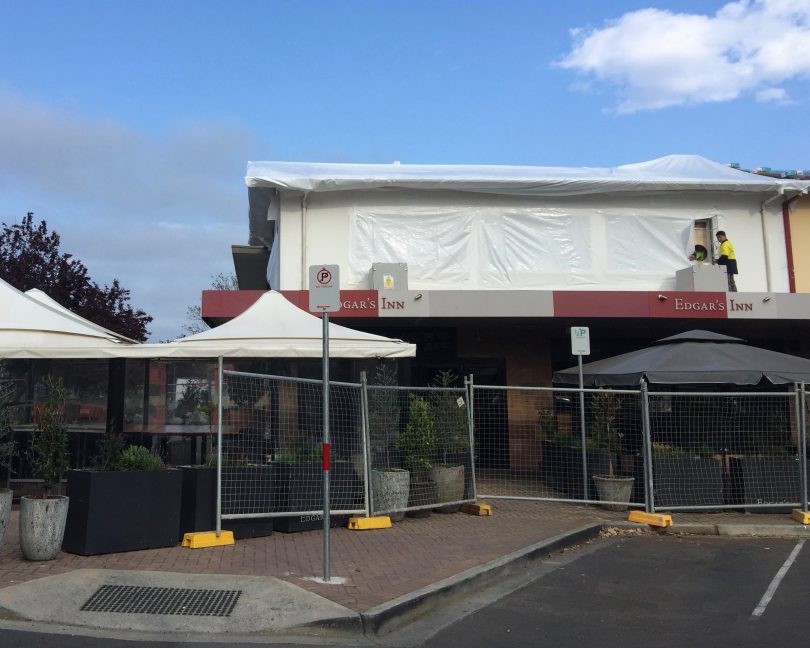 Work will commence this week on the replacement of roof tiles and other roof upgrades at the Ainslie Shops, after loose-fill asbestos insulation was removed from the roof space and upstairs area at shop one, at the popular local shopping complex last year.

The new works will include an environmental clean of the roof spaces above Ainslie Shops three and five at the same time as the roof is replaced.

When announcing the start of this work, ACT Work Safety Commissioner Greg Jones also said, “In the longer term, full remediation (demolition) of the premises will be required,” and “Long-term demolition is the only answer”.

Director of the family company that owns the shops three and five, Manuel Xyrakis, said, “My most important consideration is the safety of the public and the owners and workers at the Ainslie Shops.”

He was concerned to hear that the ACT Work Safety Commissioner had stated in a media release that ‘In the longer term, full remediation (demolition) of the premises will be required’.

‘There is no way in the world we would be doing this remediation work if we knew the building would need to be demolished,’ Mr Xyrakis said.

The full cost of the remediation work is upwards of $200,000 and is being paid for by the property owners without any contribution from government.

“As a commercial premise, responsibility for these works and the safety of the building rests with the building owner, however, WorkSafe ACT will continue its on-going monitoring role as well as having an active presence to ensure these works are undertaken safely,” Commissioner Jones said.

Mr Jones said that he understood the owners had sourced tiles for the roof work which met heritage considerations.

Licensed asbestos assessors and removalists will be undertaking works based on a comprehensive plan forwarded to WorkSafe ACT.

The upper level shops in the north building will be closed while the roof replacement works take place. A small number of car parking spaces will also be closed for the duration of the works.

“WorkSafe ACT has supported the building owners in their communication with tenants and neighbouring residents around the works. Inspectors will regularly check the safety of works over the course of the upgrade,” Mr Jones said.

The RiotACT has seen the information provided to tenants and there is no mention that ‘Long term, demolition is the only answer’.

Mr Jones confirmed with The RiotACT that the end solution for the asbestos issues at Ainslie Shops was demolition and that he couldn’t specify how long the current remediation activities would hold that off.

Mr Jones said he couldn’t say whether demolition would be ‘three, five, seven or 20 years’ away.

Work is expected to take about four weeks, weather permitting.

Do you think there should be a commercial asbestos program in the ACT along the lines of the Mr Fluffy program for residential properties?

To those saying there is no difference between a residence and a private home a couple of points.

1. For the most part in a private home the risk was not living there but the risk of you doing work/renovations that disturbs it and the risk to unsuspecting tradies.

That said if I am not mistaken private Mr Fluffy residents had the option of staying in their own homes with some onerous controls put in place. That also mitigates the risk.

And that is what it is about assessing and mitigating risk. For the most part knock it down is the best solution for all.

Demolish the Ainslie shops??!! Just like everything else that matters to the Canberra locals.

Why are they safe if the homes weren’t ??

Felicity Anne Prideaux commercial areas are less likely to have asbestos disturbed- a more controlled environment I would have thought? I am an Ainslie local from parents that lived in Ainslie and do not know of anyone who has a health issue caused by the Ainslie shops - except maybe from the brothel that was left undisturbed for many years!

Not sure that amosite (loose fill asbestos aka Mr Fluffy) understands the difference between a residence and a commercial premises ....

Loose fill asbestos is deadly - no matter where it is installed ....

If over 1000 families lost their homes because they are unsafe - how can a commercial premises be safe ?

Margaret Freemantle Mr fluffy loose asbestos in the Ainslie is not the same as in my home? Talking about double standards alive and kicking!!! My home and other 1000+ houses have to be knocked down because of public health issues, Ainslie shops should go too... A lot of people go to the shop each week compares to people come to my home...

Margaret I would take a bet that I am ....... it’s completely ridiculous for building owners etc to think it’s safe ....

You mentioned that you didn’t y know anyone who had been affected - did you know that numerous people have died from mesothelioma in the ACT ? I certainly have no idea if they all visited Ainslie shops but one thing I am sure about is that the people I know of who lived in the inner north, did .....

It’s outrageous that a building that has thousands or people In it every year is allowed to be cleaned and over 1000 families lost their homes ...

Ainslie shoppers do not want any demolition. There is no risk to health.