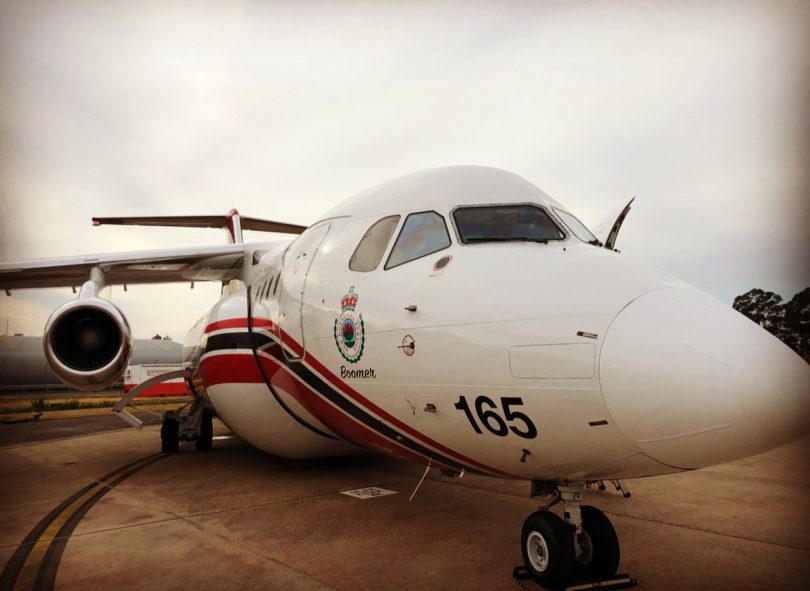 It takes Boomer around 40 minutes to fly between the Yankees Gap Fire and Richmond RAAF Base. Photo: Kim Staples Twitter.

The effort against the Yankees Gap Fire burning in the Bega Valley for the last 34 days has seen a spectacular escalation with a large air tanker adding muscle and confidence.

The tanker, known as ‘Boomer’ carries 11,000 litres of water or fire retardant and made seven runs over Yankees Gap yesterday (September 16). It is back in action today, returning to Richmond RAAF Base between each dump to fill up and return; a 40-minute flight each way after 20 minutes on the ground.

The tanker is working in partnership with the ‘Fireboss’ a fixed-wing plane which uses amphibious floats to scoop up 3000 litres of water in 12 to 15 seconds, before returning to the front line to unleash its load.

One of the aircraft that supported the fire-fighters on the ground at the Big Hill fire this week is the Air Tractor AT 802, also know as the "Fire Boss". What it lacks in carring capacity compared to the VLAT it makes up for in speed and agility.Equipped with amphibious floats, the Air Tractor’s AT-802 “Fire Boss” adds yet another dimension of capability for fire fighters. It can scoop 3000 litres of water in 12-15 seconds and be off the water and on its way again to the front lines in as few as 20-30 seconds.With the ability to work as a land-based aircraft or a skimmer, the “Fire Boss” can drop an initial load of retardant then remain close to the fire by scooping water from a nearby lake or river.#NSWRFS

Four water-bombing helicopters also remain in play, a sight and sound that has become familiar to residents between the fire ground and the refueling base at the Old Bega Racecourse.

The water and retardant drops today (September 17) are important containment options ahead of tricky weather conditions late Tuesday and into Wednesday.

Four kilometres of back-burning operations are also being developed with residents warned to expect large amounts of smoke.

Crews on the ground are continuing to blacken out the edges of the fire which has so far burnt out close to 20,000 hectares. Those same men and women, which number around 110, are also taking care of any hot spots and working in conjunction with aircraft.

Six bulldozers are working on various control lines in and around the fire ground. The skies between Bega, Bemboka and Brogo are busy with water-bombing helicopters. Photo: Hayley Stephens Facebook.

The new air resources coincide with confirmation that one home was destroyed during Saturday’s flashpoint, which brings the total to four during the whole emergency. Nine outbuildings were also lost at the weekend as high temperatures and winds in excess of 100km/hr stirred the fire and threatened Bemboka, Coopers Gully, Numbugga, and Brogo.

Thankfully no human lives have been lost but increasingly people are speaking of the emotional and physical toll this protracted and constant state of alertness is having.

“I’m concerned for the impact this is having on peoples mental well being. It is going to be a long summer,”

“I find it quite draining emotionally.”

“You’re right Jan and Nicki. My concern already is complacency as it drags on, my own complacency, not others or the services.”

Warn out volunteer firefighters are also an increasing sight. These women and men of such ticker give so much of their time but many are also managing (or not!) paid employment and all the usual juggling balls of life.

The people of Reedy Swamp, Vimy Ridge, and Tathra are at various stages in their grief and recovery; it’s an example that inspires and adds to the resilience of those currently living in the midst of active bushfire, but it’s a reality and history that suggests no one can relax – exhausting.

Di Green - 5 minutes ago
I so enjoy these gardens View
Vee Bee - 3 hours ago
We miss it so much :( View
Community 28

Sarah Handley - 13 minutes ago
Meredyth Wendel how will the cygnets cope lol View
nobody - 55 minutes ago
Who in their right mind thinks all 10,000 plastic ducks will be recovered? View
JS9 - 3 hours ago
Where does it suggest anywhere they are just going to be left to wander down the river after the race is over? View
News 12

JC - 19 minutes ago
Correct death rate has not been the same as the flu. For one reason and one reason only and that is because we have restricti... View
JC - 25 minutes ago
It’s been standard practice through the pandemic. Rightly or wrongly. View
Maya123 - 39 minutes ago
Twas always the way. I have seen an old death certificate where a long term medical condition was mentioned, but the cause of... View
Opinion 45

Slim Hunter - 49 minutes ago
Natives or weeds that require watering?🤔 View
Jim Andrews - 3 hours ago
Nathan Burraston With respect my friend, you dont know what you are talking about. First up you cant just plant a tree anywhe... View
Sport 17

chewy14 - 4 hours ago
Whatwik, You act like the lockdown has no negative health consequences of its own. Perhaps have a bit of a longer think about... View
News 62

A Canberra doctor who prescribed her patient and partner 450 Ritalin tablets in 13 days has been suspended from practising....
News 12

UPDATED 3 pm: The ACT Government is hopeful that the Territory can be COVID-normal by Christmas and is betting on its...

@The_RiotACT @The_RiotACT
Chief Minister Andrew Barr has outlined Canberra's roadmap back to normality. Sadly, it comes on the same day the ACT recorded its first death in this COVID-19 outbreak https://t.co/u9YifU91kZ (48 minutes ago)