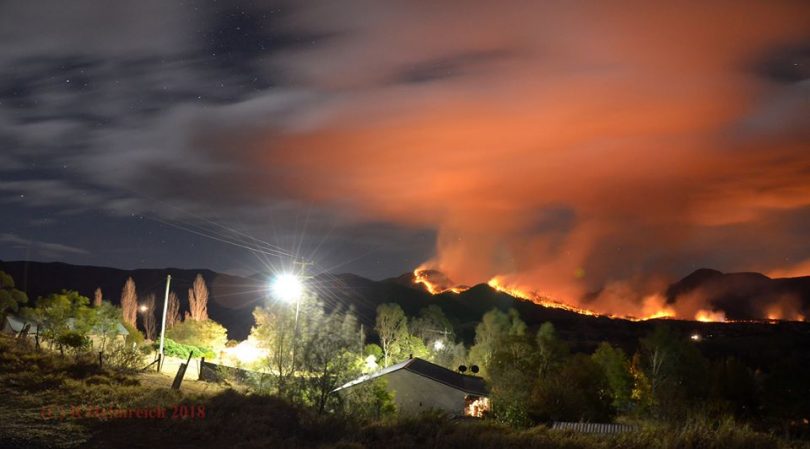 For a large part of Saturday (September 15) nowhere in South East NSW felt safe from fire. It’s a feeling that is already chipping away at the region’s lust for summer as the vast Yankees Gap Fire looms like a volcano in the drought-stricken landscape.

Day 32 of this 15,500-hectare fire presented a flashpoint we had been warned about and feared.

While blackened leaves falling from the sky rattled communities as far east as Bega, Jellat, and Kalaru the people of Bemboka, Coopers Gully, Numbugga, and Brogo felt the real threat of the fire which quickly escalated to an Emergency Alert Level on the back of hellish winds and high temperatures.

As I write there are unconfirmed reports of more homes being destroyed by the flames of Yankees Gap, which has already claimed three properties.

Bombala and Cathcart to the south-west of Yankees Gap faced their own trouble with the Jonas Street Fire burning out 60 hectares and threatening homes on Market St, Keys St, Cathcart St, Maybe St, and Bucky Springs Rd.

A number of other fires across the Snowy Monaro, Bega Valley, and Shoalhaven tried to make the most of the conditions only to be beaten back by the swift response and skill of the Rural Fire Service, Fire and Rescue NSW, the National Parks and Wildlife Service, and NSW Forestry Corporation.

Winds blew at 100km/hr and above while temperatures spiked to 30 degrees, in the case of the Yankees Gap Fire, the sort of conditions firefighters have been preparing for in the weeks since day one of the fire on August 15.

Snowy Mountains Highway remains closed as a result of the Yankees Gap Road, Bemboka fire (Bega Valley LGA). Continue to monitor conditions in the area and listen to firefighters on the ground. #NSWRFS

Only a good dump of rain will quench this blaze; containment has been the aim, supported by daredevil water-bombing helicopters that spent a chunk of Saturday grounded.

It’s a strategy that no doubt spared more properties and communities coming under threat today, that aside crews scrambled to respond to fire breaking containment lines to the north, west, and east.

Cooler conditions will give some of the 100 firefighters a break on Sunday, as will welcome and not unexpected reinforcements from the Eurobodalla.

The influence of a southerly change that moved in mid-afternoon took the sting out of the Jonas Street Fire and helped keep its flames out of nearby pine plantations, while on Yankee Gap the change allowed crews to start notching up a few wins, however, conditions are forecast to remain challenging until 11 pm Saturday (Sept 15).

Sunday’s forecast boasts cooler temperatures and higher humidity, edged with the threat of strong winds out of the south-west.

The Snowy Mountains Highway is expected to remain closed overnight Saturday/Sunday between the Princes Highway and Mogilla Road at Numbugga. The diversion for traffic headed west and east via Brown Mountain is along Mogilla Road at Candelo.

Bega Showground is open as a place of refuge, with a range of welfare and support services gathered offering motel accommodation and help with animals and personal supplies. Longtime Bega Valley farmer and RFS member Noel Watson says he’ll be able to sleep on Saturday night, reassuring words at the end of a horrid experience for many, add to that a downgrade in the alert levels for the Yankee Gap and Jonas Street fires and the fact that dedicated firefighters remain alert ready to protect isolated rural properties.

Smoke will be a feature of Sunday, as it has been for most of the last 32 days, we all fear the threat it signals for the warmer months ahead.

@The_RiotACT @The_RiotACT
Dobinsons is on a roll and bringing their baked goodies to a street near you. Find you how you can get your fix to make lockdown a little sweeter https://t.co/z8IGWiEGyy (32 minutes ago)