The 34-passenger seat Saab 340B Plus aircraft will service the Canberra-Hobart route. Photo: Link Airways.

Canberrans will be able to fly direct to Hobart for the first time since 2013 after confirmation that Canberra-owned Link Airways will commence four return services a week from 3 December or sooner, growing to 11 next year.

Canberra Airport said the exact timing of the start of services depended on when the Tasmanian Government decided to open borders to people from the ACT.

Tasmania’s border is set to reopen from 1 December, allowing flights to start 3 December, but if the Tasmanian Government moves earlier than that, Link will look to bring flights forward.

Both the airport and Chief Minister Andrew Barr had said a deal on a Hobart route was close when announcing last week that Alliance Airlines would start twice-weekly services to the tourism hotspots of the Sunshine Coast and Cairns.

READ ALSO Airport launches direct flights to Sunshine Coast and Cairns, and Hobart may be next

The Link partnership is another step in the Airport’s COVID-19 recovery plan, which is focusing on key tourism markets and regional airlines.

Link Airways is owned by Corporate Air, one of the longest established aviation service providers in eastern Australia, and currently operates airline services from Brisbane, Sydney, and Melbourne to nine destinations in Queensland and NSW.

The 34-passenger seat Saab 340B Plus aircraft will service the Canberra-Hobart route. 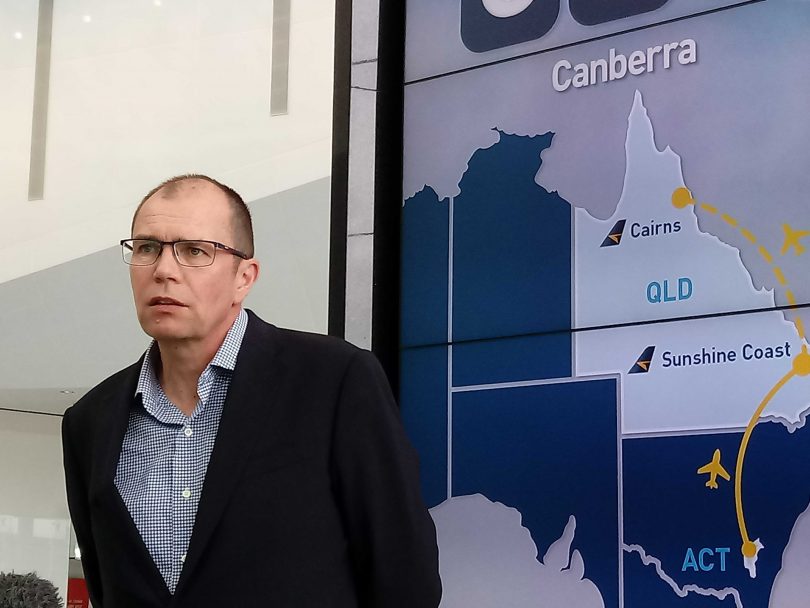 Canberra Airport’s head of aviation Michael Thomson: the Hobart deal comes after the opening of a new route to Queensland. Photo: Ian Bushnell.

”The proposed service will not only facilitate travel between the ACT and Tasmania, but also provide a convenient and cost-effective alternative for passengers wanting to connect from Canberra to other domestic destinations,” he said.

“We’re excited to partner with a local Canberra business to connect travellers with Tasmania,” he said.

”It is the second airline in less than a week to announce new services from the capital, adding further confidence that we are restarting aviation in Canberra.

“Canberra tourism and business are ready to welcome back travellers to the capital and Canberrans are ready to get away, and with flights starting just before Christmas, there is no better time to book your flight to Tasmania.”

Chief Minister Andrew Barr said that the announcement is another great opportunity for Canberrans.

“Once Tasmania reopens its borders it will be great for Canberrans to have yet another new option to fly direct and enjoy a short break away,” he said. ”I thank Canberra Airport and Link Airways for their confidence in the route – a great success story for a Canberra-owned airline which will lead to more visitors and more jobs for Canberrans.”

Virgin was the last operator to fly direct to Hobart.

Bookings are open and Link is offering tickets from $219 one way for the two-hour flight.

Helene Gunn can you pick me up from the airport and we will go to Maydena? Xox

Helen Susan are you on to this?!

Sarah Stubbs I so am!!

Never heard of Link Airline this is very good news!

Lachie, this could make a trip a little easier!

Rowena Maddie and I are coming for you!