Canberra Airport is expecting to clinch direct connections to China, New Zealand and Vanuatu within the next eight years and double daily flight movements by 2040, according to its new Master Plan.

The Federal Government has announced that the Airport’s 2020 Master Plan has been approved, and the airport expects to release it to the public on 5 March after some minor changes.

The Airport says by 2040 Canberrans will be able to fly direct to iconic overseas holiday destinations with its international reach extending across the Pacific to Fiji, Hawaii, and Los Angeles; and to the Asian centres of Bali, Kuala Lumpur, Bangkok and Hong Kong, while adding Dubai to its Middle Eastern link.

The Master Plan, a 20-year strategic vision that will ensure appropriate development and cater for growth forecasts, says the Airport expects to see more than nine million passengers by 2040, including one million international travellers.

At present, the Airport says it serves nearly a million people in the greater Canberra region.

The 170 domestic and international aircraft movements a day are expected to double over the next 20 years, with Canberra increasingly serving as a freight hub, particularly with Canberra Airport being the only Boeing 747-capable airport without a curfew between Brisbane and Melbourne. 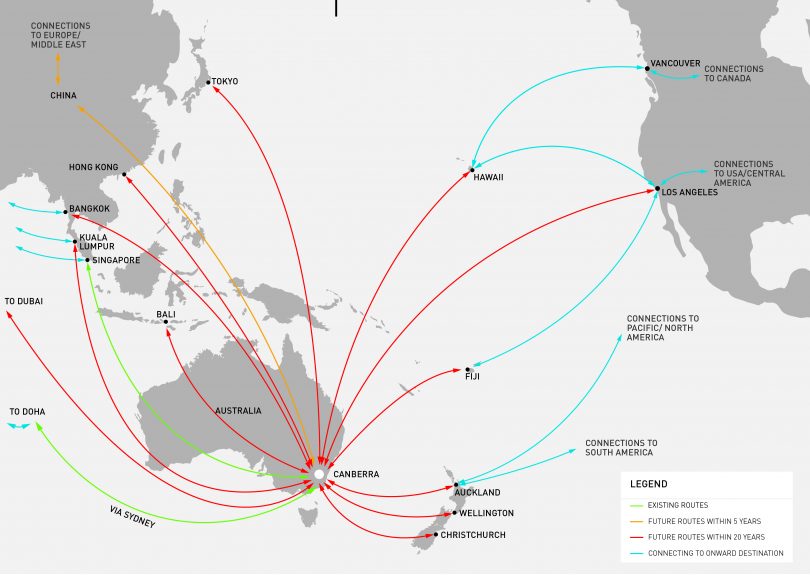 The airport currently serves more than three million passengers per year, forecast to rise to more than nine million by 2040 if all goes to plan. Image: Canberra Airport.

The Canberra Airport is already one of the ACT’s biggest employment centres, with 14,000 people currently working in the precinct, and it is forecast to increase to 36,000 by 2040.

Head of Aviation Michael Thomson said that within the next five to eight years Canberra Airport would be working to bring in more international and low-cost carriers, resulting in more passengers than ever before.

“The airport currently serves more than three million passengers per year, but those numbers are forecast to rise to more than nine million by 2040 if all goes to plan. Canberra Airport’s ethos is to invest early to provide room for growth,” Mr Thomson said.

Earlier this month Chief Minister Andrew Barr said he had been meeting Air New Zealand officials to continue the push to reinstate direct flights across the Tasman, as well as discussing low-cost carriers with the Airport and teeing up talks with Singapore Airlines.

China is the ACT’s largest international tourist market and about 5000 Chinese students study in Canberra.

Announcing the Master Plan’s approval, Deputy Prime Minister and Minister for Infrastructure, Transport and Regional Development Michael McCormack said the Plan paved the way for better infrastructure and expanded capacity at the Airport.

“The airport and these developments are expected to indirectly support more than 37,000 jobs and generate $6.8 billion in economic activity by 2028,” Mr McCormack said.

Senator for the ACT Zed Seselja said the Master Plan set out a number of proposed developments over the planning period, including a freight hub and the continued growth of the airport’s business parks.

“This Plan is good for Canberrans who want to travel, and for the Canberra economy, opening more opportunity to bring tourists to our great city,” he said.

Approval of the 2020 Master Plan follows a comprehensive statutory referral and consultation and the Airport will now not have to submit a new Master Plan for eight years after having previously been on a five-year cycle.

Makes it easier for Pollies to head off OS for their holidays.. Hawaii here they come

No flights to New York ?

firts improve the stoopid pick-up parking...10 mins....out in the cold...jeez

As I was alluding to on previous post: https://au.finance.yahoo.com/news/virgin-reduces-fleet-forecasts-virus-hit-222619797–spt.html

I’m confused. Surely such a development and it’s axiomatic implications for the climate would see mass and sustained protest by climate changers?
Or could it be that climate changers, having signalled their virtue and cleansed their inner conscience by protesting for the cameras, are just as happy to indulge in a first world lifestyle as climate sceptics?

Of course, all this depends on whether the global airlines are still around after the coronavirus is brought under control.

Canberrans really do live in a bubble given that it has already been widely reported that thousands of Chinese university students can’t travel here to resume their studies and the pandemic is now well and truly global. Not one mention of it in this article yet our chief minister was in China only weeks ago.

Qantas has already cancelled services to China and if one wants proof of how the airlines are being affected read up on what is happening on the share market.

If this pandemic wasn’t so serious, it would be amusing to see some of the posts about people hoping for “direct flights to Hawaii”.

Scottie from Admin will make sure there is a direct flight to Hawaii.

Michael Wilson but still no direct flight to Hobart!

Pity flying out of Canberra is so expensive, when our daughter lived in Melbourne it was a lot cheaper to fly home to Williamtown than Canberra, and i I know people in canberra that get the bus to Sydney and fly from there rather than Canberra 🙁

That will be handy for the MP for Manilla

Wendy Ruediger A very nice one! 👍😊

Alex Evans Roberts how good is this and Vanuatu too

Lots of free trips to China I hear !!!

Much better value flying from sydney

Juan Pablo no difference in price.

Jonathan Hickman its still $800 difference for a family going from canberra.

And I'm certain you don't pay for flights

"Much better value flying from Sydney"... yes because that's such an enjoyable proposition for anyone connecting from a domestic flight to an international one! You literally have to catch a bus from one terminal to another. I'll happily pay a little extra for a direct flight from Canberra to wherever... and avoid the transiting nightmare in Sydney.

Why the delay? Please bring it forward.

How does this fit with ACT goal of zero net emissions?

Caroline Le Couteur By reducing the emissions from connecting flights to other Australian hubs, for a start? Are you expecting the airport to not use planes?

Caroline Le Couteur you expecting us to not use planes any longer and go back to the dark ages? This is the 21st century where we use planes for overseas travel. We don’t swim or use high speed yachts 🤦🏼‍♂️

Not correct. Labor are saying Zero net emissions. This means that emissions are possible, but only if offset by some form of carbon capture.

Capital Retro - 4 hours ago
Nailed it. Many of us still believe in those aspirations and values. Also, Canberra Libs need to talk in billions of dollars... View
Keran Niquet - 4 hours ago
Colin Vivian .Totally agree. The back stabbing of Gary Humpries by the party and Zed started the rot. Until they withdraw sup... View
HiddenDragon - 6 hours ago
Noting that the ACT commentariat now treat light rail and the stamp duty/rates-land tax trade-off as articles of faith in a s... View
Sport 2

Cassandra Jones - 4 hours ago
Michael W Doyle come down for a visit and give my Charlotte some lessons!! View
Community 24

Roger Mungummary - 5 hours ago
Tge total lack of costings for their pie in the sky promises easily branded them as trickle down advocate coverage... View
HiddenDragon - 6 hours ago
"In order to unseat a very established government in a progressive city, the Liberals have to do everything right, and the ti... View
Colette Robinson - 12 hours ago
Mac John they don’t seem to have ever cared at all about people who don’t own cars. View
Lifestyle 56

Brenton Higgins - 5 hours ago
Not in the slightest - the extent of act gov involvement was they opened an EOI for two operators. No govt involvement other... View
Carlos Wallace - 6 hours ago
Everything is dangerous to everyone in 2020. I'm just happy to see people and families out and about smiling. You can't wrap... View
Steven Harris - 6 hours ago
Also be aware that lots of places are speed limited but you still get slugged the same per minute rate. IMO the rate should d... View
Lifestyle 8

HiddenDragon - 8 hours ago
Whatever the outcome on ministries, it would be good to see the Greens avoid any agreement with Labor which involves an expli... View
News 11

Jacky Clements - 11 hours ago
Janine Demitriou in your hood... View
show more show less
*Results are based on activity within last 7 days

Six people have been forced to quarantine until 21 October after being identified as a close contact of a confirmed...
What's On 5

In the NSW Southern Tablelands is a garden property once closed to all but the Australian gentry, but now open...
Property 5

The three-bedroom, two-bathroom home at 43 The Crescent in Queanbeyan is an exceptionally renovated home. Built in the Californian bungalow...
Opinion 41

A brand new colourful and hip dumpling joint has opened in the heart of the Bradley Street foodie precinct at...
Community 24

@The_RiotACT @The_RiotACT
Are you worried about the fluff floating around Canberra and wondered what it is? We have the answers https://t.co/QKphbiFRAc (4 hours ago)

@The_RiotACT @The_RiotACT
The Basement is one of Canberra’s premier live music venues but somewhat surprisingly, it also serves up vegan deliciousness in spades https://t.co/apRKeItW9y (6 hours ago)