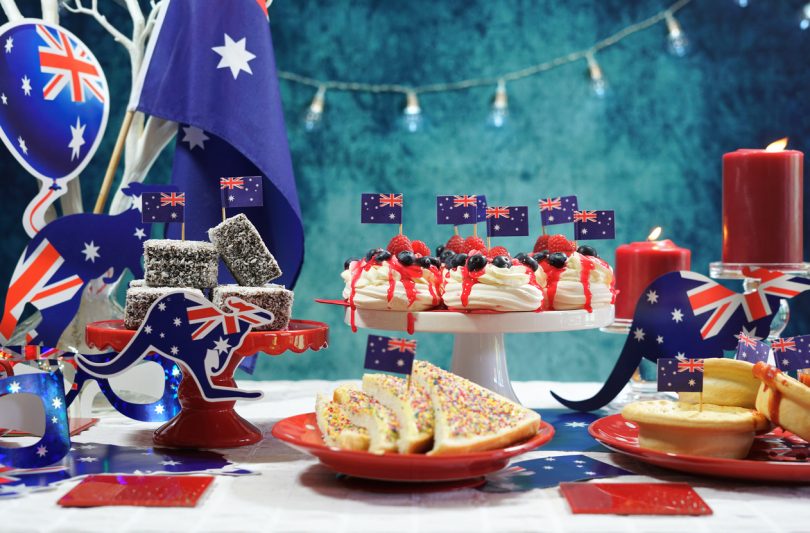 From breakfast to its spectacular pyrotechnic climax, Canberrans can choose from a kaleidoscope of events based around Lake Burley Griffin to celebrate Australia Day.

The forecast is hot and cloudy, but don’t let any overcast conditions fool you with extreme UV for most of the day. Canberrans are being urged to take steps to keep cool and avoid heat-related stress while enjoying the festivities by keeping hydrated by drinking plenty of water and avoiding alcohol and caffeine. Wear light weight clothing and a hat when outdoors, and don’t forget to slap on the sunscreen!

ActewAGL’s Great Aussie Breakfast will kick off celebrations in Commonwealth Park, near Stage 88 at 7:30 am, followed by the national flag raising and citizenship ceremony at Rond Terrace on Parkes Way at 9 am.

Commonwealth Park has a packed program with rides, activities and amusements. Children can learn about craft or be painted with Aussie faces and tattoos. On Stage 88, children’s concerts featuring Dora’s Dance Party will perform during the morning, while in the afternoon Canberra blues and roots band The Bridge Between will present their unique blend of sounds.

From midday, the Chief Minister’s Regatta will take place at West Basin on Lake Burley Griffin.

As the afternoon wanes and the sun goes down the attention will shift to Regatta Point where the pre-fireworks entertainment will kick off.

From 7 pm those magnificent men in their flying machines from the ADF Aviation Display will take to the skies, while at 7:30 pm the Traditional Boat Squadron display will churn up the lake.

ARIA nominated artists Justice Crew will headline the Australia Day in the Capital concert at 8:10 pm with their legendary moves and epic beats, supported by Jess & Matt (6 pm) and popular locals Tuchasoul (7:15 pm), showcasing their stunning vocals and much loved lyrical style.

When the summer sun finally fades the main fireworks display will explode from 9 pm and feature a dazzling display that will light up Lake Burley Griffin and the surrounding Canberra icons.

Regatta Point and the Patrick White Lawns (Lakeside of the National Library of Australia) are the best vantage points from which to enjoy both the pre-fireworks entertainment and fireworks display.

Transport Canberra will be operating on a Sunday timetable. After the fireworks finish, free chartered Transport Canberra buses will run from Commonwealth Avenue bus stops at Regatta Point to Gungahlin Marketplace, City, Belconnen, Tuggeranong and Woden bus stations until about 10:15 pm.

Car parking will be available at the following locations:

Temporary car park, road and lake closures include the following:

Are there any sausage sizzles throughout the day – aside from the Commonwealth Park ACTEW AGL breakfast sizzle which ends at 10am.