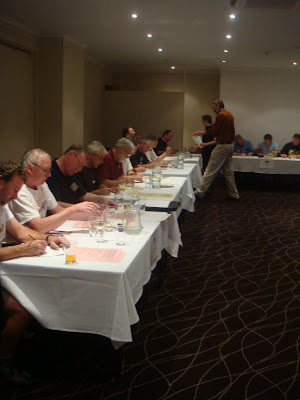 Today saw the first day of judging in the Australian Amateur Brewing Association‘s Championship, hosted by the Canberra Brewers Club, being held here in Canberra for the fifth time in it’s history since inception in 1995.

Canberra has an extremely rich history in amateur brewing with a pedigree that can’t be denied, with a Canberran taking out Champion Brewer five times in the last six years; Christoph Zierholz, owner and brewer at Zeirholz Premium Brewery in Fyshwick, in ’03 & ’04, Craig Webber in ’06 & ’07 and Ross Mitchell, this year’s Head Judge, winning last year. Christoph is now a professional but Ross and Craig stated quite confidence that with the brewing talent around there is a good chance a Canberran could be holding the championship again this year.

Although ‘Amateur’ in name there is very little amateur about the running or seriousness of this competition. Seated in a conference room in Olims Hotel nine tables of three judges a piece sit sniffing, peering and sampling brews from all over the country. With 80 styles in 18 categories being judged (nine categories today and nine tomorrow) with up to 18 entries in each category it’s no small task. Judging is based on the BJCP (Beer Judge Certification Program) guidelines and is more rigorous than similar wine competitions.

Judges are presented with a calibration beer, a commercial brew representative of the category they are judging, and then blind samples of the brews in competition. It probably would not surprise many to find that brewing is a male dominated activity but local brewer and Chief Steward of the competition, Megan, stated they are always on the lookout for more local female brewing enthusiasts. Another of the Championship organisers stated it is commonly accepted that women excel at being able to differentiate subtleties in aroma and palette.

Andy Davidson, a committee member of the Melbourne Brewers club commented on how encouraging it was to see the recent resurgent interest in amateur brewing. Like many amateur brewers Andy’s passion for the amber ale sees him wishing to educate the broader drinking public and he runs beer and food matching nights in Melbourne. More and more Canberra eateries are also starting to offer food and beer matching suggestions.

The judging continues tomorrow with the winners being announced during the club night tomorrow evening. Interested amatuers can get in touch with the local brewers club at www.canberrabrewers.org where we’re sure you’ll find lots of likeminded enthusiasts and advice on perfecting your own brews.

Its Craig Webber not Chris in 06&07. At least have the decency if your posting to get the names right.
[ED – thanks for spotting that error. It is now fixed]

@The_RiotACT @The_RiotACT
Police have released photos of three young men involved in a dangerous vehicle burnout recently, and are calling for witnesses https://t.co/aHs03hxBN1 (21 minutes ago)

@The_RiotACT @The_RiotACT
Thinking of buying or renovating: A blindsided Andrew Barr has taken aim at the one-size-fits all approach of the Federal Government's stimulus package for the housing sector, warning it is too generous and may jack up house prices https://t.co/XgVdOjnX0o (49 minutes ago)