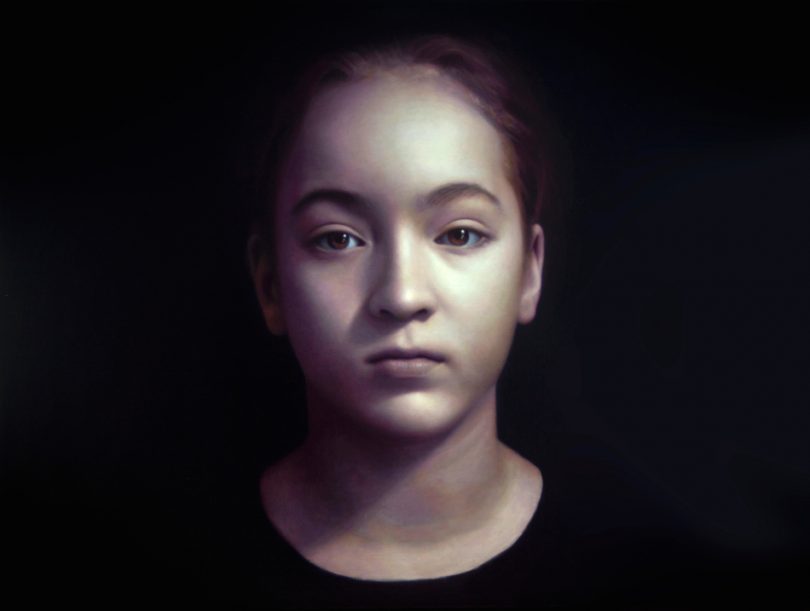 Mr Callum, who trained in Sydney and New York, is a three-time Archibald Prize finalist and won the Black Swan Portrait Prize in 2015.

His oil on linen creation entitled ‘Meg’ was singled out from a strong field of 35 finalists by this year’s judge, Guardian Australia art critic, Dr Andrew Frost.

“Marcus Callum’s painting has an arresting luminosity that matches the sensitivity of the treatment of his subject. It’s also a virtuosic demonstration of contemporary realist portrait painting,” Dr Frost says.

Boasting a purse of $50,000, the Shirley Hannan is Australia’s richest prize for realistic portraiture.

A humbled Marcus Callum says the win will allow him to keep painting for a bit longer.

“I am honoured and thrilled, every painting here deserved to win,” he says.

The winning work is about growing up in a complicated, confusing, and often extremely frightening world.

“The transition to adulthood can simultaneously be full of joy and fraught with danger,” Mr Callum says.

“My subject, Meg, stares at the viewer with an uneasy confidence. Despite an uncertain future, she emerges from the darkness as an all-knowing and omnipotent being.”

LIVE at the $50,000 Shirley Hannan National Portrait Award at the Bega Valley Regional Gallery And the winner is….

The biennial Shirley Hannan National Portrait Award celebrates realistic portraiture. Mrs Hannan was a gifted portraitist, and well known in the Bega Valley as a staunch supporter and generous patron of the arts.

A prerequisite for the award is that works selected as a finalist should depict their subjects accurately and demonstrate a sound skill and knowledge of drawing and painting technique.

It was Mrs Hannan’s wish that the award had a specific and unremitting realist bent, which continues to this day.

The award has its roots in 1993 as the John Balmain National Award for Portraits and Figure Drawing. Mrs Hannan re-energised the idea in 2002 and substantially increased first prize, which continues today with the support of her husband Brian Settle and son Peter Hannan. 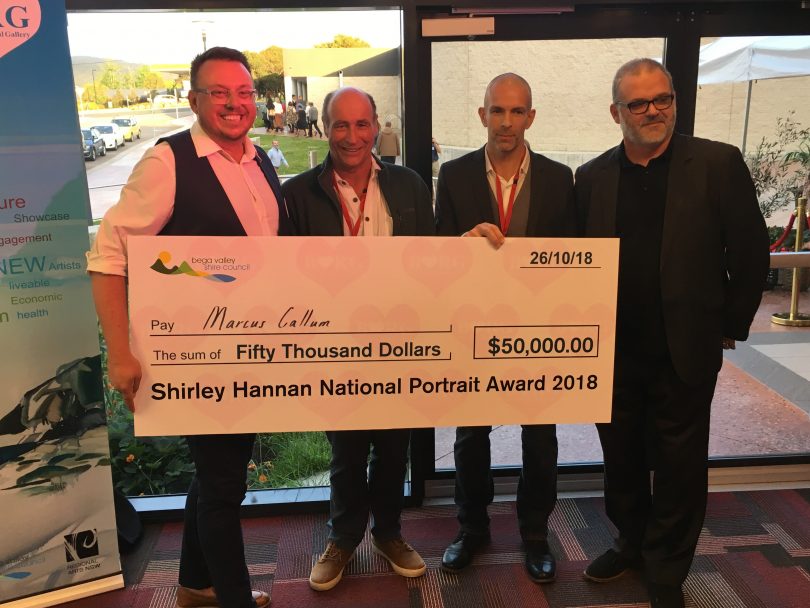 Bega Valley Shire Mayor, Cr Kristy McBain, paid tribute to the “continued and generous” support of the family with Peter Hannan on hand Friday night (October 26) to enjoy this high point of the local arts calendar.

“The great esteem this award is held in is clear, with the largest number of entries ever being received and all Australian states and territories represented,” Cr McBain says.

Cr McBain also thanked all the artists and families who had travelled for the opening.

“A huge Bega Valley welcome to all the artists and families who have travelled to be here tonight and thank you for the significant contribution your attendance makes to our economy.

“I encourage you to take time to, not only enjoy the exhibition but to have a look around our beautiful Shire.”

Council’s General Manager, Leanne Barnes added to the growing expectations around a new regional gallery for the shire, teasing the large crowd that the next Shirley Hannan might take place in a new artistic and cultural space.

“We now have the DA (Development Application) approved for our expanded and upgraded gallery next door – it looks amazing,” she says.

“We have our grant application lodged and we are shovel-ready and we have made it through to the second stage [of that grant process].”

The concept plans for the new Bega Valley Regional Galley were prepared by Melbourne based Sibling Architecture. Photo: Supplied.

Voting is now open for the $3000 People’s Choice Award. Visitors to the gallery are invited to vote for their favourite portrait. The winner will be announced at the conclusion of the exhibition.

The Shirley Hannan National Portrait Award runs until December 8 at the Bega Valley Regional Gallery on Zingel Place, Bega, open Monday to Saturday, 1o am to 4 pm, entry is free.

Kali - 9 minutes ago
Poster boy for the 'it's all about ME' generation. View
Jennifer Albs - 2 hours ago
He is great player and pretty talented man, but his behaviour over shadow everything and not to mention mode swing, plus acti... View
Stewart Mcdonald - 2 hours ago
Lucy Humphreys I love the game but the sterile personalities bother me I think the game representing different social groups... View
Food & Wine 6

Stephen Saunders - 34 minutes ago
Look, I don't oppose this, it can never be remembered too often. But the first priority that needs it own Canberra memorial i... View
News 17

chewy14 - 37 minutes ago
Ha, that should read uninformed, not uninformed. BJ, on that link you've provided, have you actually read the ICRC report on... View
chewy14 - 54 minutes ago
No, To be honest, It's because I think you're uniformed on the scope and causes of the problem, the research that has been oc... View
bj_ACT - 2 hours ago
I’m not just criticising this project from 2014, I’m criticising two decades of broken promises, failed projects and the... View
News 199

Jess Thomas - 40 minutes ago
David Deb Cossart that's the thing: people who can afford the fine can afford to speed. Changing this would mean that no-one... View
Liam Searle - 1 hour ago
Make the speed limit suit the road, change it back to 60! View
AliciaAnn Dowd - 4 hours ago
Werner Schenk I agree with you. There is already a system in place to assist people manage payment of their fines. SPER allow... View
Community 41

@the_riotact @The_RiotACT
The announcement of a new national Holocaust #museum in #Canberra comes in the wake of a report that reveals almost one in four Australians over 18 has "little to no knowledge" of the #Holocaust https://t.co/ojjuaIjCrz (59 minutes ago)