ANU gets the Tuckwell Scholarship program

ANU have published a video explaining their new scholarship program:

The Tuckwell Scholarship program at The Australian National University (ANU) is the most transformational undergraduate program in Australia.

Launched in February 2013, the Scholarship program is funded by a landmark $50-million gift to ANU by alumnus Graham Tuckwell and his wife Louise.

Each year, 25 new Tuckwell Scholars will receive $20,000 per annum for up to five years for expenses such as accommodation and living costs.

The Tuckwell Scholarships are open to school-leavers from around Australia and apply to undergraduate degrees across all disciplines at ANU.

Graham Tuckwell is an alumnus of ANU (BEc Hons 1978 and LLB 1981). He is the founder and Chairman of ETF Securities Limited (ETFSL), a leading issuer of Exchange Traded Products in Europe, the USA and Asia-Pacific, with approximately $30 billion in assets making it the seventh largest ETP firm in the world. He invented the concept of exchange trade commodities when he launched Gold Bullion Securities in Australia in 2003. Prior to establishing ETFSL, he was involved in corporate advisory and investment banking for 20 years in Australia and London, working with Investor Resources Limited (a firm he founded), Salomon Brothers, Normandy Mining, Credit Suisse First Boston and Schroders. Graham’s first job was working for Dr Vince FitzGerald as an economist in the Department of Prime Minister and Cabinet in Canberra.

Louise Tuckwell (née Wright) is an alumna of the University of Queensland (BDSc 1984) where she was awarded a University Medal. Louise worked as a dentist for a number of years in Australia and the UK. She completed the first year of an MBA at the University of Adelaide before putting her energy into bringing up a family of four children, coping with three international moves and a husband who was always travelling. She is passionate about education, especially in music, and has always taken an active role in school life on a voluntary basis. Volunteer roles have included participation in various school committees and church activities.

Apparently the plan is the rival in time the Rhodes Scholarship. 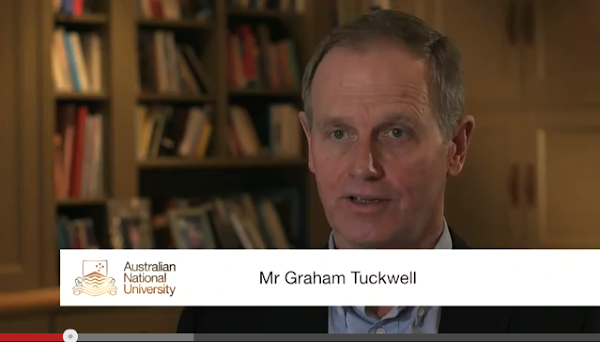 What a marvellous, generous gift. May the Tuckwell Scholar become the equal or better of the English Rhodes.

And may it excite similarly (financially) gifted benevolent philanthropists to undertake similar donations.

It is great to see a similar thinker to Dick Smith.

this got press in the fairfax media [i saw it in the age, sourcing the crimes], too – based on him being aquiet acehiver who attributes his success to turner primary and anu.

Steven Campbell - 19 minutes ago
Reducing posted speed limit is simply government’s way of running away from their responsibilities. Laws are only as effect... View
Opinion 11

Capital Retro - 25 minutes ago
Nailed it. View
thebscaller - 9 hours ago
So what have you achieved other than self promotion? A message from someone saying that the only hope they have is for a libe... View
Mark Parton MLA - 11 hours ago
Thanks for constructively engaging, but I would reject the characterization of my advocacy for Alex as a media stunt. And I w... View
Opinion 71

Capital Retro - 26 minutes ago
Spot on. What goes on behind the scenes is usually at odds with the "clean & green" propaganda we hear. Just like a wind "far... View
George Watling - 9 hours ago
These things also generate vast amounts of e-waste and carbon pollution. Studies show they last about 9 months before they ar... View
Business 21

Neil Thompson - 31 minutes ago
Andrew Turnbull, great bloke to get on the piss with as well. View
Trevor Hicks - 47 minutes ago
About time 👍 View
Jess Puddick - 2 hours ago
Kimberley love it, so excited for it to be restored! View
Opinion 11

Shane Westmore - 8 hours ago
Absolutely. There’s people voting now who are completely misinformed about anything going on in this country & waste their... View
Nada Krstin - 10 hours ago
oops, meant to say, cannot have it one way! :)... View
Nada Krstin - 11 hours ago
No. And if you think they are mature enough to vote at 16 or 17, then they should be tried for any crimes as adults as well,... View
Opinion 94

George Watling - 8 hours ago
Marc Edwards Spot on Marc. The best way to deal with congestion is decentralize workplaces. If everyone is travelling to a ce... View
Property 1

ACT resident - 10 hours ago
It is unrealistic for the Canberra community to pay for a company’s poor commercial decisions. The risks for CRS, newly reg... View
HiddenDragon - 13 hours ago
"...Capital Recycling Solutions, is in early talks with the government about its costs. It is hoping for an agreeable settlem... View
Lifestyle 1

ANU’s biggest ever bequest came out of the blue

@The_RiotACT @The_RiotACT
Amelia Bidgood ventures off the beaten track to @yarrhwines to try their seasonal Winemaker's Sail ... and can't help but pick up a bottle of their stunning sangiovese https://t.co/vfesq5BVzv (13 hours ago)