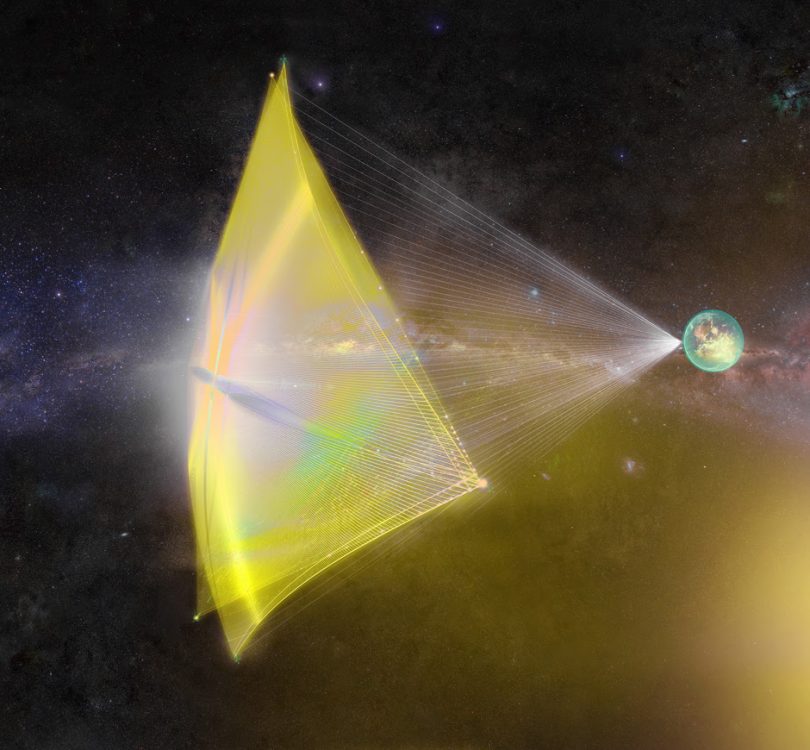 A light sail that outlines the design concept for a laser propulsion system to launch probes from Earth. Image: Breakthrough Initiatives.

The sheer physics behind an ambitious international project to explore the worlds surrounding our second nearest star system, Alpha Centauri, is staggering, yet the mission scientists from the Australian National University (ANU) have chosen to accept is a simple one.

“Reaching another star system within a human timescale requires travelling at a sizeable fraction of the speed of light,” says the research paper before it delves into analogous expressions of accelerating a scale spacecraft through photon radiation pressure, requiring 100 gigawatts of continuous-wave optical power and 108 individual lasers.

Behind the breakthrough project is an initiative to investigate life in the universe via a suite of scientific and technological programs called Breakthrough Initiatives, founded by Yuri Milner, an Israeli investor and philanthropist.

The research paper, published in the Journal of the Optical Society of America B, by the ANU team, with funding support from Breakthrough Initiatives, outlines their design concept for the laser propulsion system to be used to launch the probes from Earth.

The ANU scientists have designed the new type of spacecraft propulsion system that aims to explore the worlds surrounding Alpha Centauri via an ultralightweight spacecraft, which acts as a light-sail, to travel with unprecedented speed across tens of trillions of kilometres to the star about four light-years away, reaching the destination within 20 years.

Lead author Dr Chathura Bandutunga, from the Applied Metrology Laboratories at the ANU Centre for Gravitational Astrophysics, said the light to power the sail will come from the Earth’s surface – a giant laser array with millions of lasers acting in concert to illuminate the sail and push it onto its interstellar journey.

“To cover the vast distances between Alpha Centauri and our own solar system, we must think outside the box and forge a new way for interstellar space travel,” said Dr Bandutunga.

“Once on its way, the sail will fly through the vacuum of space for 20 years before reaching its destination. During its flyby of Alpha Centauri, it will record images and scientific measurements which it will broadcast back to Earth.”

The founding scientist who pioneered the ANU node of this project, Dr Robert Ward, said an important part of this grand vision is the development of the laser array – in particular, designing a system to have all the lasers act as one.

“To achieve this, we estimate the number of lasers required to be approximately 100 million,” said Dr Ward, who is from the ANU Research School of Physics.

Researcher and fellow author, Dr Paul Sibley, said one of the main challenges the team tackled is how to make measurements of each laser’s drift.

“We use a random digital signal to scramble the measurements from each laser and unscramble each one separately in digital signal processing,” he said.

“This allows us to pick out only the measurements we need from a vast jumble of information. We can then break the problem into small arrays and link them together in sections.”

To orchestrate the show, the ANU design calls for a Beacon satellite – a guide laser placed in Earth’s orbit which acts as the conductor, bringing the entire laser array together.

Professor Michael Ireland, from the ANU Research School of Astronomy and Astrophysics, said the design of the laser ‘engine’ requires compensation for the atmosphere.

“Unless corrected, the atmosphere distorts the outgoing laser beam, causing it to divert from its intended destination,” he said.

“We have developed the algorithm which allows us to use this information to pre-correct the outgoing light from the array.”

Dr Bandutunga said just like the eventual light-sail, this research is at the beginning of a long journey.

“The next step is to start testing some of the basic building blocks in a controlled laboratory setting. This includes the concepts for combining small arrays to make larger arrays and the atmospheric correction algorithms,” he said.

“While this proposal was put forward by the ANU team, there is more work happening internationally to come up with unique and clever solutions to other parts of the problem. 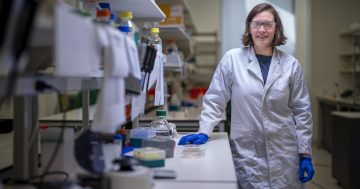