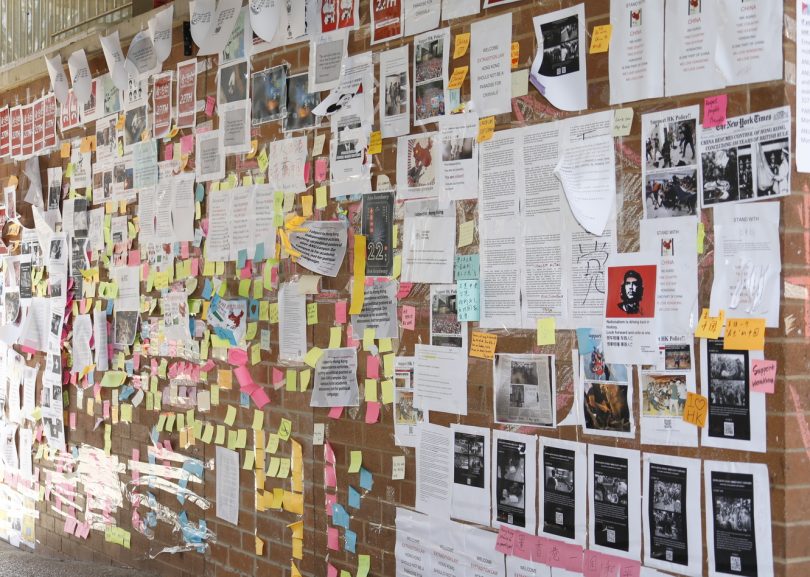 A collage of sticky notes and posters has turned a busy underpass at the Australian National University into a Lennon Wall in support of the pro-democracy demonstrations in Hong Kong.

The wall near Copland Courtyard had attracted hundreds of notes calling for democracy and opposing the Chinese government’s perceived totalitarian rule. It emulates similar protest walls in Hong Kong and around the world.

Lennon Walls, inspired by the famous Prague wall that activists decorated with Beatles’ quotes in the 1980s, have become a popular form of protest against Hong Kong’s extradition bill and have spread to university campuses across Australia, including the University of Queensland and the ANU.

UQ’s Lennon Wall, however, has been subjected to vandalism, with reports of masked individuals tearing down the wall.

According to students on campus, the area around the wall has attracted a lot of tension, with pro-Beijing students pulling down parts of the collage and putting up posters of their own.

ANU student Nick Richardson said there had been no violent clashes at the wall like the University of Queensland, but the mood around the underpass was “tense”. 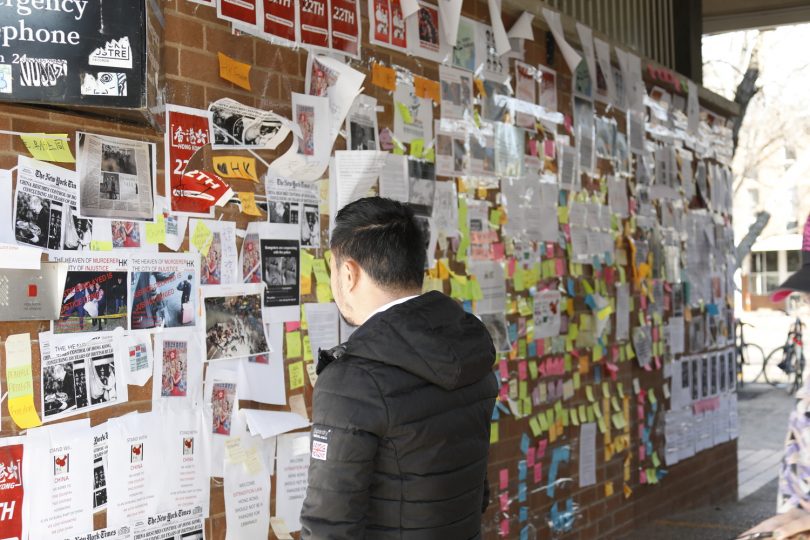 The mood near the Lennon Wall is “tense” according to one student.

“A lot of ANU’s student population is Chinese international students so it is quite split on that divide,” he told Region Media. “The pro-Beijing contingent have been very vocal and have been physical against the wall.

“They have taken down posters and reposting pro-Chinese posters. The ANU and a lot of other student bodies have put out posters not taking a side but more supporting free speech and the right to vocalise your opinions.

“It is tense definitely. There is an ANU security guard there patrolling the area 24/7. There are make-shift barriers surrounding the wall and there are signs reminding people not to be violent and not to take any photos of people.”

An ANU spokesperson said its students have behaved in a respectful and considerate manner in expressing their views over the past few days as ANU security continues to monitor the situation.

“The University acknowledges ANU students have behaved in a respectful and considerate manner in expressing their views over the past few days and we thank them for this,” the spokesperson said. “We encourage our students to express a wide range of views, but to do so respectfully and peacefully. 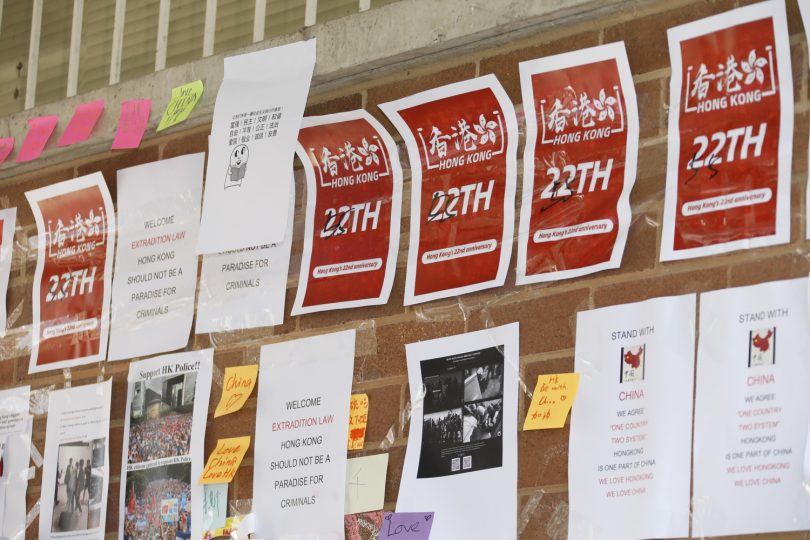 The posters are a mix of support and opposition to the Chinese government’s totalitarianism.

“ANU will not tolerate violence or harassment on campus and our Discipline Rule makes our expectations very clear. The potential consequences for students who don’t meet these expectations are serious and can include exclusion from the University.

“ANU is a community of diverse backgrounds and many different views and experiences. Each member of our community is entitled to share their views, and to disagree with the views of others. We expect, however, that this contest of ideas will remain respectful even in the midst of the most robust of debates.

“Any student who is subject to, or witnesses, inappropriate behaviour can seek support and advice from the Dean of Students or their Residential Head of Hall or contact ANU Crisis Student Support on 1300 050 327 or text 0488 884 170.”

When Communism and Democracy are thrown into the same bag and shaken around, there’s bound to be conflict. In my opinion the “melting pot” idea only works if everyone melts into the same substance and leaves behind extremist ideals. Yes I am saying China is an extremist regime, they do not seem to want to assimilate with the “West”. Taking countries over by stealth and force is not acceptable in these times we live in. Free Hong Kong, let the majority of residents decide their own future.
As for the ANU, if pro-Beijing students don’t like free speech, GO HOME, where you can be oppressed to your heart’s content.