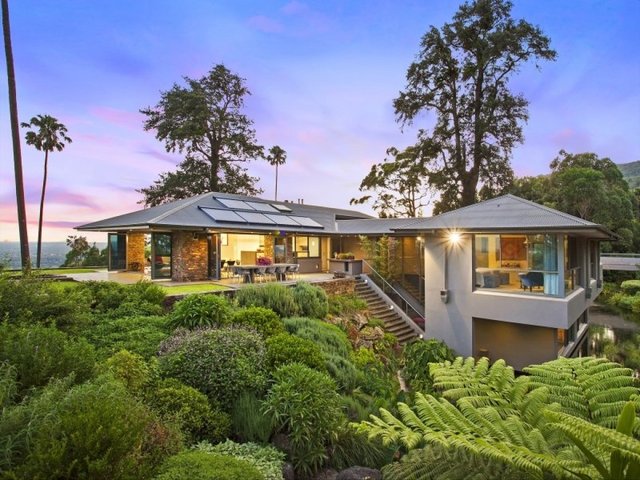 Appearing to float on a pond like the Guggenheim Museum in New York that inspired it, this amazing South Coast home sits atop a mountainside just south of Berry and commands incomparable views.

Sydney designer and horsewoman Gae Frecklington bought the vacant 40.47 hectares (100 acres) block in 1998 but it was to be another four years before she set about making her vision for the property become a reality.

“I had been riding my horse at Terrey Hills and agisting there while everybody told me about how beautiful the area around Berry was with its nice farmland and views of the ocean,” Ms Frecklington told The Australian. “I had never been to the South Coast so I took a trip with my mother and returned two weeks later looking for property. Within a day of finding this land, I made an offer. It had views of the sea, was nice and high, had lovely farmland and 100 acres.” 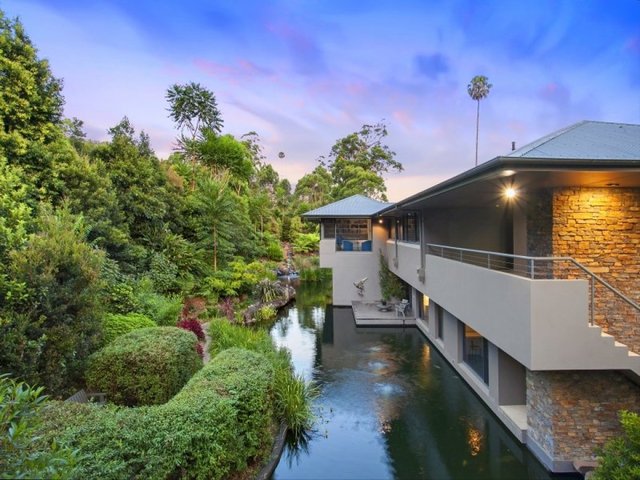 Agent Carrie Bond from South Coast Prestige Property said that in 2002 Ms Frecklington moved to the property to live in a demountable and start the long creative process of building Hillsvale step by step.

She had visited the Guggenheim, designed by legendary architect Frank Lloyd Wright, and wanted to replicate the way it appeared to float on water.

Sydney architect Nick Carter obliged, and the Hillsvale home does just that, sitting on a Koi pond Ms Frecklington created herself.

Ms Bond said the owner built the house from the ground up and its creation is a feat of engineering as much as a triumph of the imagination.

In order to even access the site chosen for the house, she had to build a bridge across a ravine. “There are two 200,000 litre concrete water tanks up the mountain just underneath the escarpment. How she got the concrete pumped up there is beyond us,” Ms Bond said.

Hillsvale was originally conceived as an exclusive getaway for horse enthusiasts but became a private retreat where the owner could train horses for dressage. 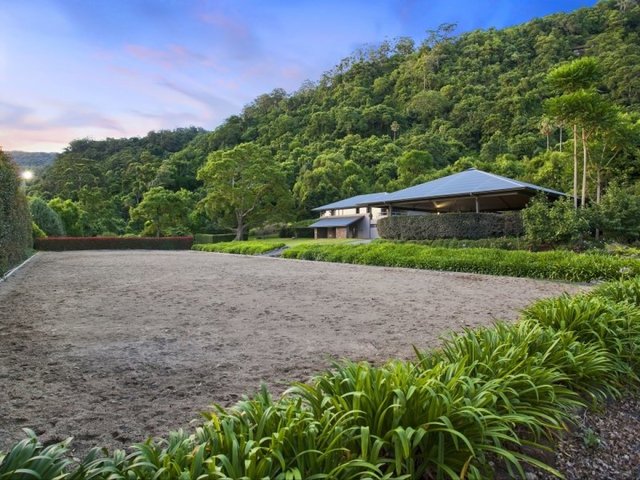 As well as the ‘floating’ house, there is a two-storey stable complex comprising four box stables with their own tack closets, a tack room, supply room, and wash bay fitted with hot and cold running water. There is also a self-contained flat above the stables, a laundry and two bathrooms.

“She didn’t do anything by halves. When she was building the stables she went to the police stables in Randwick and did her homework, and everything is state of the art,” Ms Bond said.

There is a dressage arena with lighting for night riding, an undercover round yard, and strategically planted gardens. 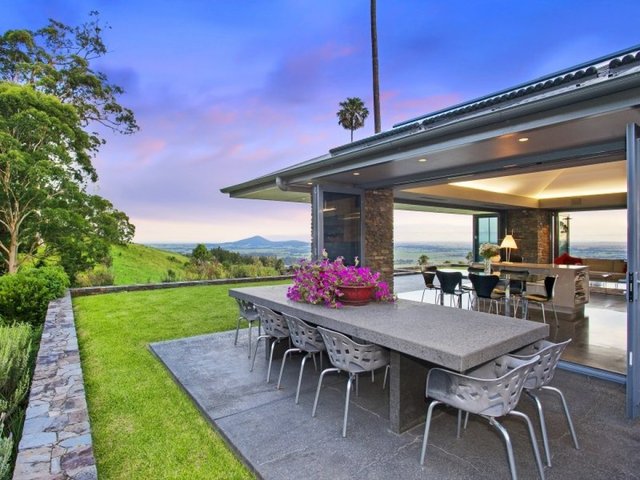 The equestrian facilities are separated from the house by a rainforest planted by the owner.

Built discretely into the hill, the two-level house is very private and can’t be seen from the road which is the only access into the property. 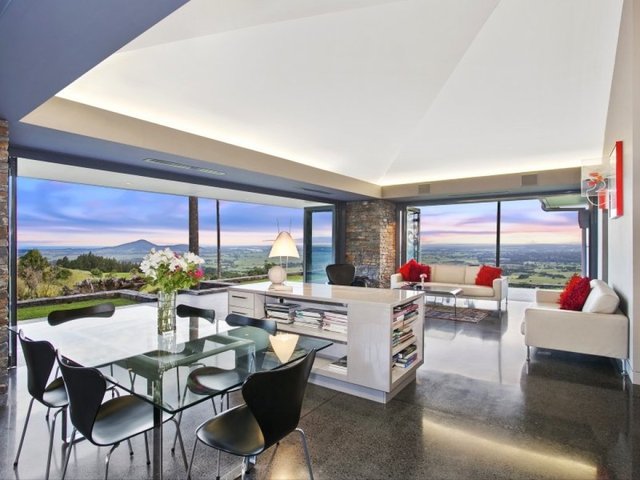 Ms Bond said the modern contemporary structure was a combination of solid concrete, stone features and lots of glass.

In the ground-level section bifold ceiling to floor doors open out on three sides from dining and living areas to outdoor entertainment spaces. “It’s one of the few properties down the South Coast that has a wide open 180-degree view of the coast,” Ms Bond said. 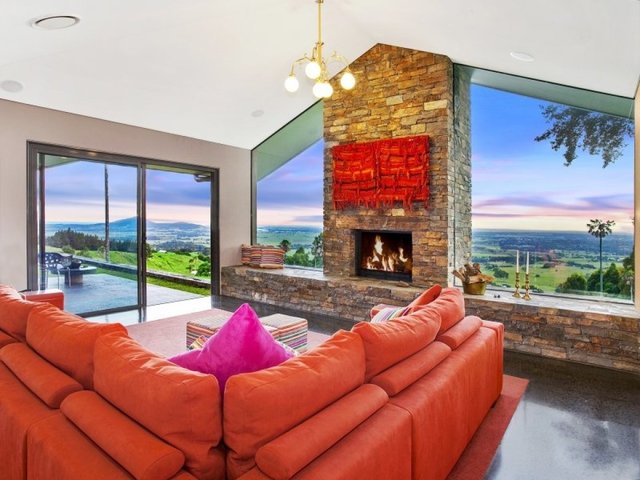 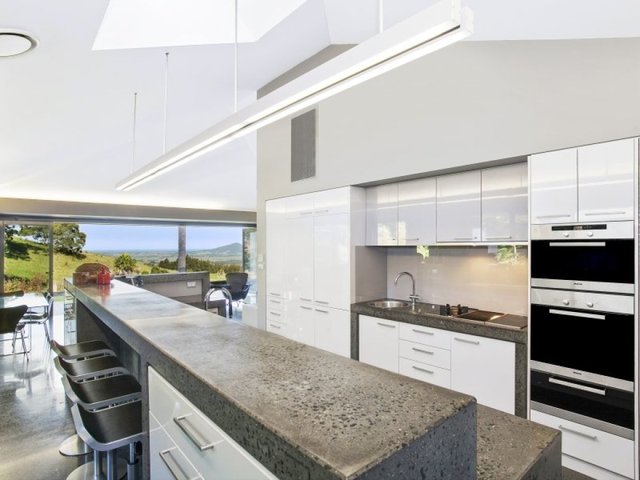 A colourful dining area for family gatherings features a concrete 10-seat table built from the floor up, with a ‘gorgeous’ timber top. Ms Bond said many features and furniture specifically designed for the house will stay.

There is also a powder room with a Carrera marble walk-in shower, vanity and toilet. 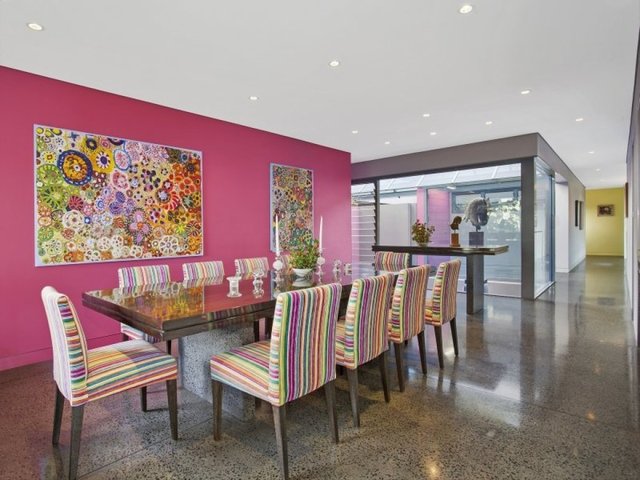 The home’s second two-storey wing, connected by a walkway and hall, contains five bedrooms and four bathrooms, as well as another living area and kitchen.

On top is the Ralph Lauren decorated master with Carrera marble ensuite, while below are four bedrooms, two of which have ensuites. The other two bedrooms share another Carrera marble bathroom. 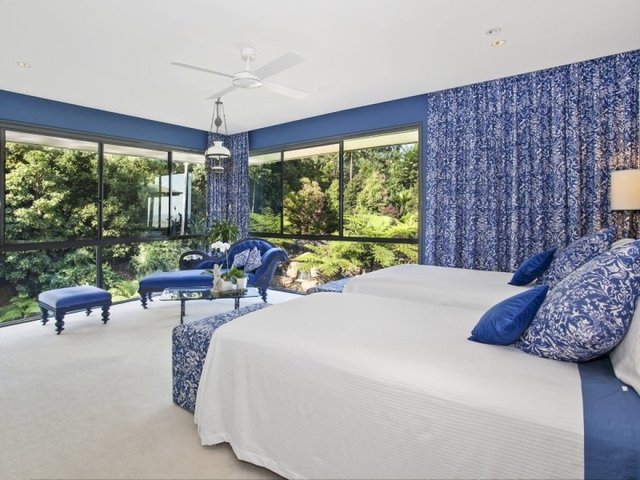 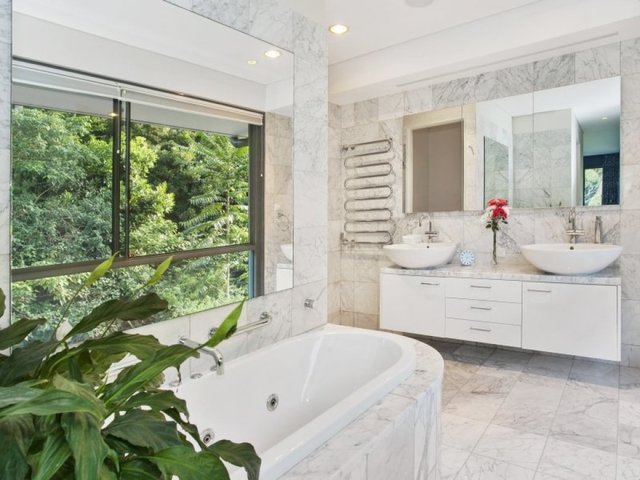 All the bedrooms and an office face north and overlook the pond, which runs the length of the house, and the rainforest. 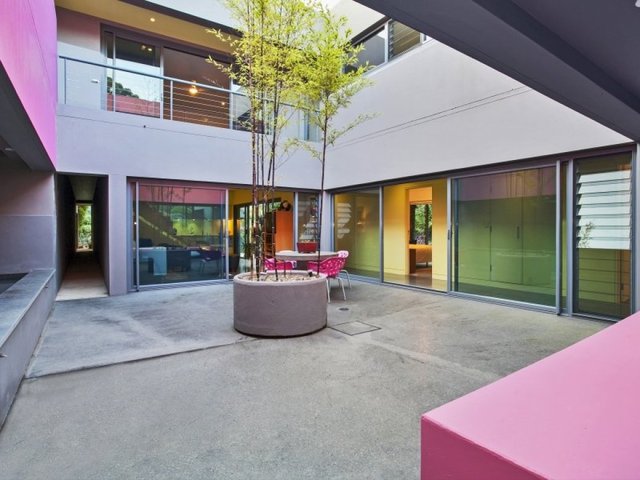 A key feature is the open-air central courtyard around which everything revolves, and where a private pontoon on the pond can be accessed.

Energy-wise, the house has mains power but the property also has a bank of 40 solar panels sending power back into the grid. A rooftop solar system provides hot water and there is also a German-engineered pump system for underfloor heating. Ducted air conditioning completes the climate control functions.

Ms Bond said there was an abundance of water, with mountain springs feeding the paddocks, and rainwater harvested off the buildings continuously pumped up the mountain to the concrete tanks to provide a gravity-fed supply. 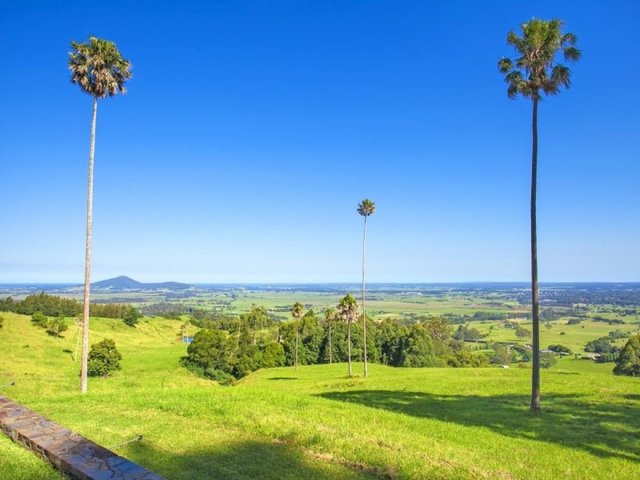 Hillsvale boasts a diverse terrain, with level lush paddocks where cattle graze, valleys, undulating hills and rainforest. And like the original idea, there is potential for a selection of sites for additional dwellings to provide an income stream from holiday accommodation, without compromising privacy for the main home.

There is accommodation for six vehicles, with two garages and four carport spaces.

David Warner - 18 minutes ago
John Elliott don't forget Howards idea... He wanted to be supreme ruler... View
David Warner - 19 minutes ago
A viable alternative would get better results but they don't put forward decent proposals View
John Elliott - 1 hour ago
Paul South ... Not possible mate because of the separation of powers in the Constitution. The Judiciary is there to keep an e... View
Community 112

Sam Austin - 41 minutes ago
Fair enough but its 1 week a year. But there needs to be a place to do this stuff, think of it like a sporting facility golfe... View
Opinion 108

Matthew Beale - 3 hours ago
Kylie Russell if this is a successful project, in a few years the southside may also benefit from a joint venture program lik... View
Opinion 153