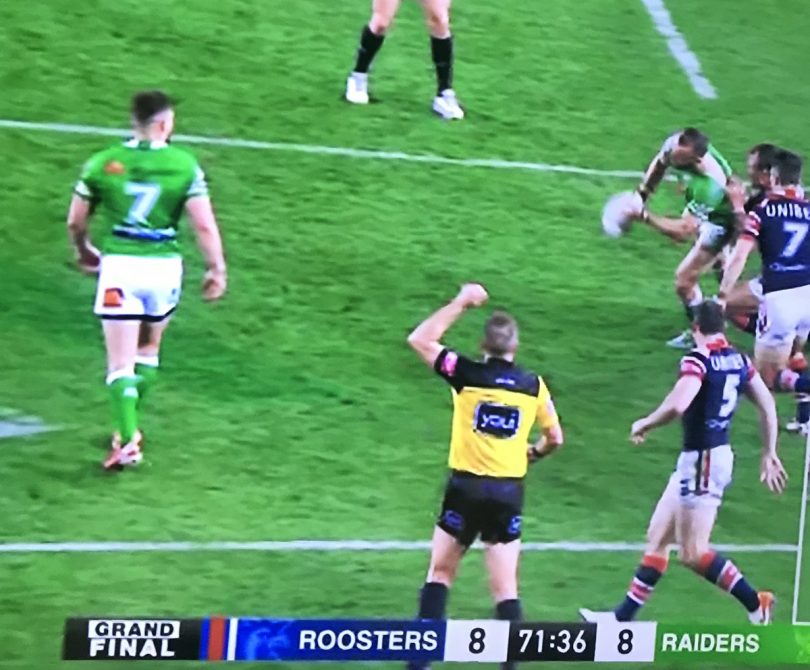 How can we forget this one moment in the grand final of 2019? Photo: Twitter.

The ‘six again’ controversy from the 2019 Grand Final continues to haunt Raiders fans. Since the grand final episode, there have been some humorous responses, which is great, but the hostile responses had a devastating impact on Cummins. He was harassed for months after the incident by irate supporters.

Cummins, who played junior rugby league in Canberra and was a primary school teacher in the ACT system, was again the referee in the Raiders loss to Parramatta on the weekend. But he had little influence on the result in which the Eels hammered the Raiders.

That won’t stop Raiders fans from feeling anxious the next time he referees a Canberra game.

Former NRL player turned referee Henry Perenara is another to create anxiety among Raiders fans. This feeling was amplified following confirmation of a forward pass in the Warriors 34-31 victory over the Raiders at Canberra Stadium in March this year.

In the early 2000s, Brumbies fans went into a state of apoplexy every time South African referee Andre Watson was appointed to control a Super Rugby game involving their team.

Much of the angst stemmed from the 2000 final at Canberra Stadium where the Brumbies led the Canterbury Crusaders 19-17 with three minutes to go. The Brumbies were the most dominant side in the competition. Nothing, it would appear, would stand in the way of their very first Super Rugby title in front of 28,000 fans at Canberra Stadium.

Things didn’t quite go to plan as the clock ticked down and referee Watson awarded the Crusaders what many interpreted as a 50/50 penalty. As sleet swept across the ground, Crusaders five-eighth Andrew Mehrtens kicked the penalty from 40 metres out, securing the victory and the title for Canterbury.

The mood in the stadium that night was palpable; Watson had become public enemy number one in the eyes of Brumbies supporters.

What many fail to recognise or remember is the fact that the Brumbies kicker, Stirling Mortlock, missed four shots at goal. Mehrtens was unsuccessful just once.

Watson again refereed the Brumbies in the Super Rugby final in 2004. I clearly remember the concern among supporters as the game approached. This time, though, the Brumbies went on to beat the Crusaders 47-38.

In more recent times, Brumbies fans have focused on Nic Berry. Conspiracy theories flowed freely after he appeared to have his arm extended, playing advantage to the Brumbies in the dying moments of the game against the Queensland Reds on 10 April at Lang Park. 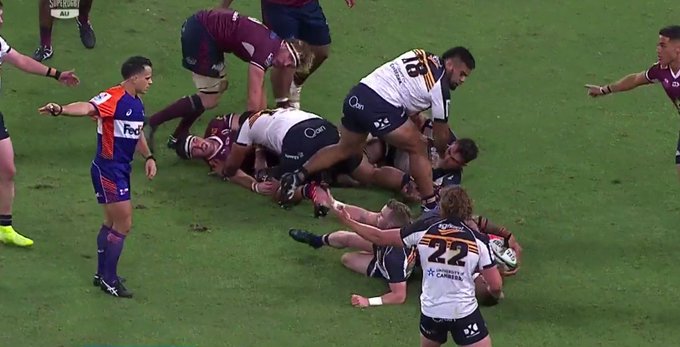 The Brumbies trailing by two and full-time and the try line close, Liam Wright of the Reds has his hands in the ruck and referee, Nic Berry, responds by raising his arm. But then he puts it down again and the Reds go on to win. Photo: Twitter.

Berry, who played 33 games for the Reds, let play continue without awarding a penalty, much to the chagrin of Brumbies supporters.

The reality is the Reds played smarter football in the dying moments.

Referees at this level in both NRL and Super Rugby face unhealthy scrutiny with decisions over-amplified in the minds of supporters. 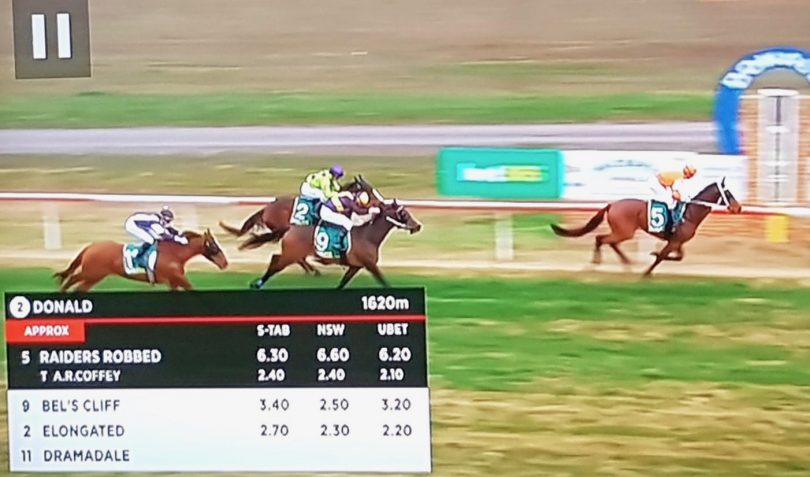 A response to the ‘six again’ call at the 2019 Grand Final. Photo: Twitter.

The abuse sporting officials receive in the current day because of social media is totally out of kilter with the actual influence these decisions have on the game. The game needs to be looked at in its entirety. I know the feeling of frustration about decisions that really change the outcome of a game along with most fans, but responses should not be fuelled with malice.

Players make mistakes, so do referees.