The almost-empty Coombs shops stands as a symbol of the poor planning outcomes in the Molonglo Valley. Photo: Ian Bushnell.

Planning and development in the Molonglo Valley will now be the subject of an independent inquiry after the Legislative Assembly backed a Greens motion on Wednesday.

Greens MLA Caroline Le Couteur took simmering community concerns over a lack of services and poor quality development in the growing area to the Assembly as planning for the newest suburb of Whitlam gathers pace.

“I’m pleased that all members of the Assembly realise that there are real lessons to be learnt from the experience in Molonglo and that this will make things better for the current residents and also for all planning in Canberra for the future,” she said.

The Government will now have to commission the review, which will need to report back to the Assembly by 31 May 2020.

Ms Le Couteur said there was a lack of community facilities, shops and schools in Wright and Coombs, as well as space for trees.

“We’ve got a situation where there are things in plans that haven’t actually been delivered on the ground,” Ms Le Couteur said.

“Despite being one of the ‘newer’ areas of Canberra, better quality development is needed – making room for trees, better solar orientation of homes and no more scraping the entire suburb bare of vegetation and topsoil as it is built.”

She said residents would like better local shops and more low-cost land for community groups such as Scouts and Guides, religious and multicultural groups.

Planning for the newest suburb of Whitlam would see residents moving in at least two years before schools and shops were built, and there was no commitment to providing a bus service.

Coombs residents still have no shops despite the completion of the shopping centre, which has only been able to attract one shop but no supermarket.

Molonglo activist Ryan Hemsley said the review was both welcome and long overdue, saying Molonglo had been plagued by a number of major planning-related issues that the review will hopefully identify and resolve.

“The first is the issue of the Coombs shops, which still have has no operational supermarket seven years after the first Molonglo residents moved in.

Koko Molonglo in Wright has suffered several planning setbacks and won’t be operational for years to come. This is an incredibly poor outcome for the Molonglo community that must never be allowed to happen again,” he said.

“The second is the repeated attempts by developers to dramatically exceed the maximum number of dwellings permitted on high-density sites. While each of these developments has been knocked back by ACTPLA [the ACT Planning & Land Authority], at least one developer, POD Projects Group, is trying to ram their proposal through the ACT Civil and Administrative Tribunal. It remains to be seen whether the current planning rules are strong enough to stop damaging proposals such as these from going ahead.”

Mr Hemsley said there was also a lot of uncertainty around the form and timing of the Molonglo Commercial Centre.

“Current word has it that the first stage won’t be operational until the mid-to-late 2020s, but the truth is we have no real idea when it will be built or what sort of facilities it will have. It would be nice if the review could provide some clarity on this matter,” he said.

“Fourthly, there is the issue of the proposed $150 million high-level bridge over the Molonglo River, John Gorton Drive Stage 3C. While the ACT Infrastructure Plan says that construction is due to start in 2020-21, as far as I am aware, that timeline will depend on funding which has not yet been allocated. I find it very odd that suburbs on the other side of the river are being constructed before this critical piece of infrastructure has even been funded.” 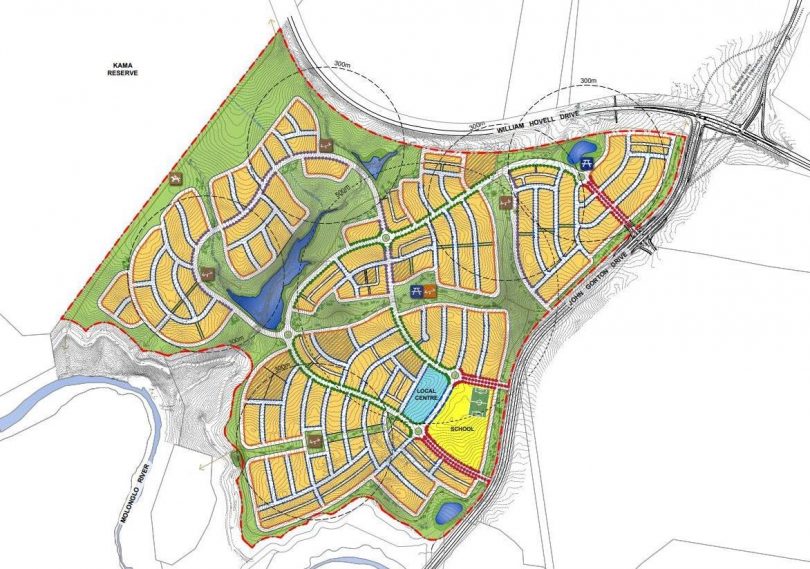 The Master Plan for the new Molonglo suburb of Whitlam. The first residents will move in at least two years before schools and shops are built. Photo: Development Application.

Mr Hemsley said there had been a deafening silence from the ACT Government on the issue of height limits on CZ5 (mixed-use) sites in Coombs and Wright, which were quietly removed in 2010 before construction on the suburbs had even started.

“Under the current planning rules, a developer could propose a 15-plus storey building on a CZ5 site in the middle of a suburb and be entirely consistent with the Coombs and Wright precinct codes. We don’t want another repeat of Gungahlin’s Infinity Towers and I will continue to push the ACT Government until this loophole is closed,” he said.

Scientist and Wright resident Jenny Edwards says the design of housing in the area could have been much better, particularly from an energy efficiency point of view and orientation of sites.

She said many in reality fell short of the minimum six stars they boasted, and the policing of requirements has been a fundamental issue in Molonglo.

She called for a minimum energy efficiency of seven stars which would encourage builders to look at design solutions for the Canberra environment.

“What’s really needed is education of developers and builders about what is possible on these blocks,” she said. “My company [Light House Architecture and Science] has demonstrated that you can achieve much higher levels of performance without adding costs.”

She said there was little room left on blocks for gardens, and combined with rock verges, concrete paths and roads, there was no relief from the summer heat.

Public spaces, apart from Denman Prospect, were also inadequate, with one park now a barren wasteland that was not used.

Ms Edwards said the lack of services was frustrating, especially the diabolical situation with Coombs shops. Wright and Coombs were eerily quiet as most residents opt to shop at Cooleman Court in Weston, putting pressure on facilities there.

“As new suburbs come online it’s just going to get worse,” she said.

When you let the developers drive the whole development, the end user always suffers. It’s time the Government took over development of suburbs, just like on the past. That way we end up with good design that’s not driven purely by the need to maximize profits over amenities.

The Government is the developer.

Adrian Fui Fui Moy no there not, it’s all private development, the land is sold to major developers like the airport to develop

Marc Edwards With respect – no, it’s not. The Airport (ie Capital Estates) did that only for Denman Prospect – the rest is all Suburban Land Agency. Who then sell individual blocks of land to individual builders and other buyers. Similarly the commercial sites are all sold individually – but the overall ‘developer’ is the SLA, ie the Government.

Adrian Fui Fui Moy cool, thanks for clearing that up 😎
Sadly I was still under the impression that they were using developers like strathnairn.

“I’m pleased that all members of the Assembly realise that there are real lessons to be learnt from the experience in Molonglo and that this will make things better for the current residents and also for all planning in Canberra for the future,”

This is the absolutely predictable, pro forma response after every glaring failure of public administration in this town (regardless of how many warnings were ignored, and contrary opinions airily dismissed) – “let’s look to the future and learn from this” – but they never do and there is zero real accountability for the stuff-ups of the past, which would be a major reason why they keep happening.

Why has the developer for the Coombs shops not been held accountable, a lot of people including me were mislead by the promise of shops opening soon

I don’t understand the developers reasoning on all this, he’s still paying rates and land tax, wouldn’t it have been in his best interest to have made it all happen faster?? Makes little sense, he does need to be held accountable.

The inquiry needs to look at the relative priority of releases in Molonglo. The decision to develop Whitlam north of the river prior to land in south Molonglo around the planned district centre will delay the viability and provision of significant commercial space in the town.

Until the provision of the bridge and major commercial releases at the District Centre, development in the District will remain fragmented with north Molonglo residents oriented towards Belconnen and North Canberra for their retail and services needs.

Any delay in providing the bridge connection between north and south Molonglo will exacerbate the situation and reduce the coherence of the overall development.

Molonglo is another example of the shallowness of the Barr government’s urban development strategy. In a rational world the provision of the $150m bridge would have a higher priority than the over-hyped, non urgent and discretionary light rail extension to Woden

I really hope they speed the whole process up to deliver the end result for the locals.

This is long overdue whilst some people are not fond of medium to high density living it actually works quite well IF there is good infrastructure in place to support the communities .

Wright and Coombes are currently suffering from a lack of shops restaurants etc and other community facilities that give areas a good vibe .

The suburbs are relatively new of course and here’s hoping the Assembly review will help to fast track some facilities and maybe do something about the Coombs shops !

Why would anyone invest in anything in Australia now. Better off just saving you cash and spending… View

By Ian Bushnell
19
What's On