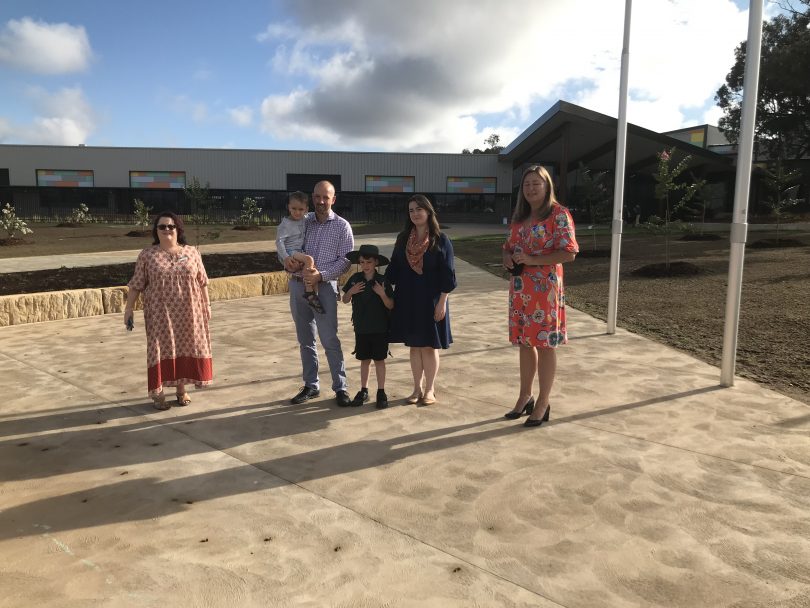 Throsby School principal Annamaria Zuffo, the Ward family and Minister for Education Yvette Berry are all relieved Canberra students are returning to the classroom this week. Photo: Lottie Twyford.

Despite the uncertainty surrounding the beginning of the new school year, parents Jessica and Nathan Ward were excited to see their sons return to on-campus learning.

Their eldest son Ethan, who is about to begin year one, said he was most excited to see his friends again, make new friends and meet his teacher.

Nathan is also looking forward to relinquishing the role of teacher, which he picked up last year during remote learning.

“I was given some very frank feedback from Ethan last year that his teacher at school was a much better teacher than I am,” Nathan laughed.

School won’t quite be back to normal just yet, however.

A mask mandate will be in place for students in years 7 to 12, QR check-ins will be mandatory, and all schools and the Education Directorate will have COVID-safe plans ready to enact.

Minister for Education Yvette Berry said it was an exciting day for everyone, especially the new students at Throsby School which opened its doors for the first time today (31 January).

“We all know that face-to-face education is the best education for young people, and we have plans in place for [managing disruptions],” Ms Berry said.

If only small numbers of staff are required to be furloughed, schools will combine classes or fill absences with casual or directorate staff.

At the other extreme are significant staff shortages which make face-to-face learning impossible. Under this scenario, a school may be closed for a period of time and would switch to remote learning.

But parents Nathan and Jessica said they accepted that things could be disrupted throughout the year, and Jessica said while the boys didn’t exactly love getting COVID-19 tests, they had become accustomed to it over the last two years.

“We dealt with [COVID-19] last year, and it will just be another rolling thing that we deal with this year,” Nathan said.

Another tool in the arsenal against COVID-19 this year will be the use of rapid antigen tests. Two tests per week will be provided to every student and staff member for the first four weeks of term.

As of 4 pm last Friday, 68 of the ACT’s 137 schools had already received their supplies of rapid antigen tests.

More than 93,000 kits have been delivered already, and all schools will have received their supplies by the end of this week.

It had been hoped 90 per cent of ACT children would have received at least one dose of vaccine before returning to school, but this was ultimately not achievable. However, almost 70 per cent of this cohort has had one dose.

Ms Berry said she was not concerned that this target had not yet been met, noting the ACT has world-leading vaccination rates for young people. She was confident Canberrans will continue to do the right thing in getting themselves and their children vaccinated.

It’s expected case numbers will increase after students return to school – both because there will be more movement around the community and as rapid antigen tests begin to be used as a screening tool and more cases are detected.