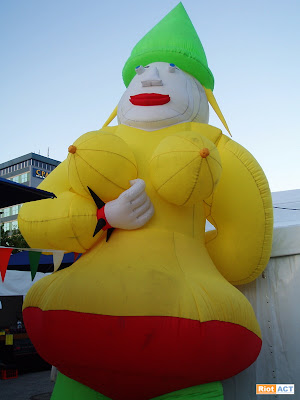 Beer And Meat On A Stick Day 2009 on Saturday was by all accounts a great success.

So great in fact that at 3pm on the day John Hargreaves was congratulating himself and anyone who might have been involved to some lesser degree.

For those unfamiliar with it, BAMOASD is also known as the “Food and Dance Spectacular” component of the “National Multicultural Festival”. Such is the popularity of BAMOASD with the general public that it pretty much covers the yawnfest that is the rest of the festival (Fringe excluded IMHO).

I was extremely unhappy to miss it, but She Who Must Be Obeyed had bought me tickets to Top Gear Live in Sydney. Even more annoyingly this turned out to be a cunning ruse to trap me in a zombie existence in the nearby Ryde Ikea. (Let us not get started on her insistence that we then take the Hume Highway BACK INTO SYDNEY to get on the M5 and pay a toll before finally getting back on the Hume, all the while in a car with no aircon during a heatwave).

The message here is clear. No matter what temptations are presented to lure you from BAMOASD, they should be resisted at all costs. Even watching Jeremy Clarkson and Richard Hammond making gay jokes about James May in front of 7,000 other Top Gear fans on the umpteenth show on the tour pales into insignificance compared to the day the whole of Canberra’s centre is devoted to endless permutations of BBQ and beer.

But while I missed it, Che was there taking photos. You can see them all below. I hear that adding Glebe Park to the party was of mixed value, with the park surprisingly hotter than City Walk / Garema Place.

(Also there was jumping in fountains, past time Australians got into that I reckon).

Having not been there myself your thoughts on BAMOASD 09 are even more welcome than usual.

After looking at the slideshow I thought you were misnaming the event, sure I saw beer, I saw sausageinnabun, I saw icecreams, but Meat on a Stick, I just couldn’t see any.

But hold on, after the fourth viewing, what’s that woman behind the elf holding? Is it? Could it be? That woman…she is holding Meat…and it is on a Stick!

There is no way I am missing this next year.

and no, I don’t know what the giant inflatable garden gnome with erect nipples means either

Who knew Canberra had an elf and pirate multiculture?
Great night, the crowd was behaving well for a beer fuelled stinking hot day, and Civic was absolutely packed.
The thought of wandering around in the sun during the day was scary but by 5PM it was nicely tolerable, and the occassional dipping of toes in fountains was much appreciated.

The Labor club was there – and selling their own branded beer steins! If that’s not support I don’t know what is….

We had a great time.

By 7 there were a few places out of food – however the ones still selling the meat on a stick were doing well – as were the beer sellers. The little ones enjoyed dancing to the different types of music and a couple of goes on the merry go round – geez that thing looks great at night!

The only issue we had was finding the portaloos and deciding who would drive home – and therefore only able to sample two types of beer.

Minister John, opening the event, was very critical of the Hellenic and Labor Clubs for withdrawing their sponsorship. He said he would let them know how disappointed he was.

What, is he threatening not to go drinking at either of those establishments anymore?

I missed this too. I too was in Sydney to see Top Gear Live. We spent most of Sunday at DFO Homebush.

I enjoyed the expansion to Glebe Park. Whilst lacking the buzz of Garema, the ample lawns and shade of Glebe Park were most welcome.

This event has taken over from the sadly missed Food and Wine Frolic.

I was there in the morning to lunch time and it was stinking hot. The heat definitely kept the crowds away. I returned later that night and the crowds were much larger.

Minister John, opening the event, was very critical of the Hellenic and Labor Clubs for withdrawing their sponsorship. He said he would let them know how disappointed he was.

He welcomed fellow MLA’s Steve Doszpot and Alistair Coe for their presence. I did hear that the Chief Minister was also seen wondering around.

I must give credit to Steve Doszpot as he went around and said hello to most of the groups who had street stalls.

The extension of the festival to Glebe Park was a huge success. The Food and Dance Spectacular is certainly growing and expanding over the city.

chewy14 - 4 hours ago
I do find it funny that so many activists and advocates for single areas seem to always have the reaction to any increased fu... View
What's On 12

Bronwyn Tolley - 10 hours ago
Karin Hagel Prince Phillip at Buckingham Palace, July 20th 1969. The day man landed on the moon ! View
Maya123 - 11 hours ago
LOL, I have about nine pairs of shoes I wear away from the house. Plus two handbags, which I haven't used for about two years... View
Tig Beswick - 12 hours ago
Robyn Lynette Pierce - when I was a little girl, I went to the NSW Governor General’s house because my dad had been invited... View
Breaking 1

carriew - 12 hours ago
Is there an update on what the package actually was? View
Opinion 9

longlunch - 14 hours ago
The only quiet things about this company are their refusal to respond to criticism, or to give details of the number and natu... View
Shaun Cummins - 16 hours ago
Even a bee is noisy! View
Property 9

Frank Landolina - 15 hours ago
Grammar check hates me. Drivers have been dumbed down with all this low speed strategy. Better driver training and improved r... View
show more show less
*Results are based on activity within last 7 days

@The_RiotACT @The_RiotACT
Mothers and children are being forced to sleep in their car as access to emergency housing in Canberra reaches a crisis point, says the @WomensLegalACT https://t.co/xdyOQdAxb5 (1 hour ago)