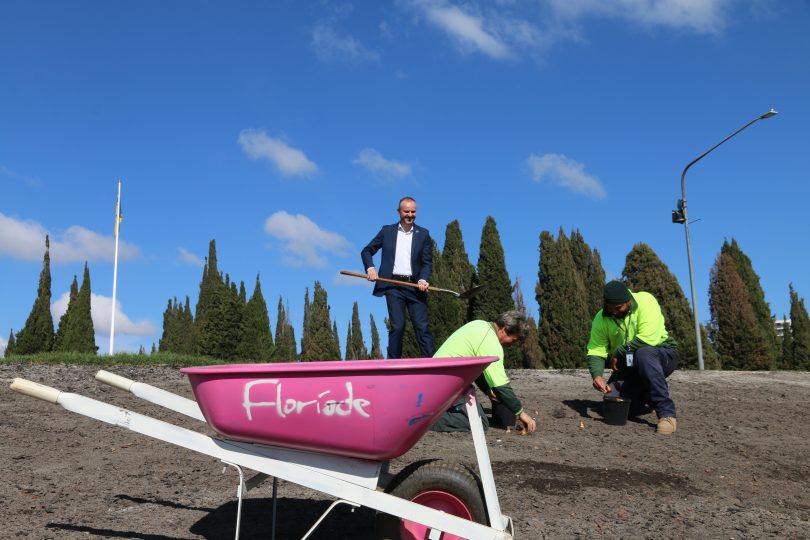 A new look, physically distanced Floriade will take place at dozens of locations across Canberra, and Chief Minister Andrew Barr has not ruled out leaving some bulbs aside for Canberrans to own a piece of this year’s festival.

Floriade: Reimagined will see 700,000 of the one million bulbs and annuals planted in garden beds around the city, and 300,000 will be set aside to brighten up national institutions, hospitals and community organisations across Canberra.

It will be a Floriade like no other, Mr Barr said.

“We are determined to maintain the tradition of a million bulbs springing to life in Canberra’s spring,” he said in front of City Hill on Tuesday morning (28 April).

“The idea that we would have a spring without flowers would be pretty disappointing so we think we have struck the right balance here.

“[We will] share Canberra’s celebration of spring as far and wide across the city as we can.”

The redesign has seen the original budget cut in half to $2.4 million. The savings will be reallocated to other projects.

On top of being one of the locations where Floriade flowers will be planted, City Hill is also getting a facelift. More trees and pathways into the park are designed to turn it into a thriving social destination for Canberrans after the pandemic.

“In the not-too-distant future, Edinburgh Avenue will connect to Vernon Circle in the same way Constitution Avenue has, so that will mean City Hill will become more of a park and destination for Canberrans,” Mr Barr said.

“It does have a very bright future as a public park. It could be more than just the centre of a roundabout. With the street connectivity in the city centre, what people can expect in the year ahead is that there will be more ways to connect the east and west of the city.”

The City Renewal Authority has been working on designing the park’s upgrade for several months now, Mr Barr said as he touted the spectacular views Canberrans would enjoy from the hill.

“When we emerge on the other side of this virus, one of the legacies will be that Canberra will have a brand new park in the centre of the city, one that will be better connected and where Canberrans will want to go.”

Head Gardener Andrew Forster says he is enthusiastic at the prospect of redesigning Floriade instead of canning one of Canberra’s most iconic events.

“We are very excited about the challenge ahead for us; we are looking at some wonderful locations across Canberra,” he said.

“City Hill is going to be spectacular with mixed daffodils. We have a few friendly rabbits so we won’t put the pansies up there.

“As you drive up London Circuit you will see beautiful daffodils of all colours bursting in springtime right through September and early October.” 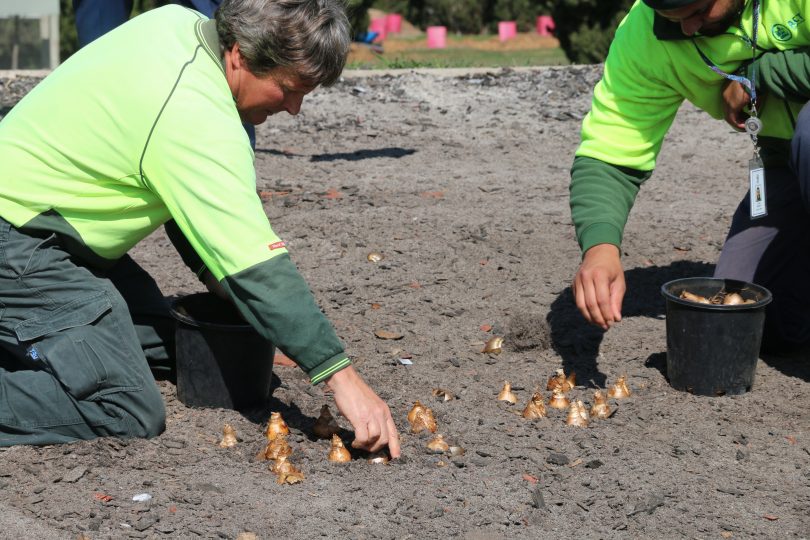 The pyramids at Margaret Timpson Park and the owl statue in Belconnen are set to be spiced up with poppies and pansies this year as Floriade makes it way into the suburbs.

Bulbs will be planted in garden beds or portable flower beds in Gungahlin, Woden, Tuggeranong, Kingston, Kippax, Condor, Weston Creek, Molonglo and a spate of other suburbs.

No bulb will go to waste this year despite the main Floriade spectacular being cancelled because of social distancing measures, and some might even find their way to a house near you, the Chief Minister confirmed.

“We are certainly open to … bulbs that are not going to be part of Floriade: Reimagined finding their way [to the public],” Mr Barr said. 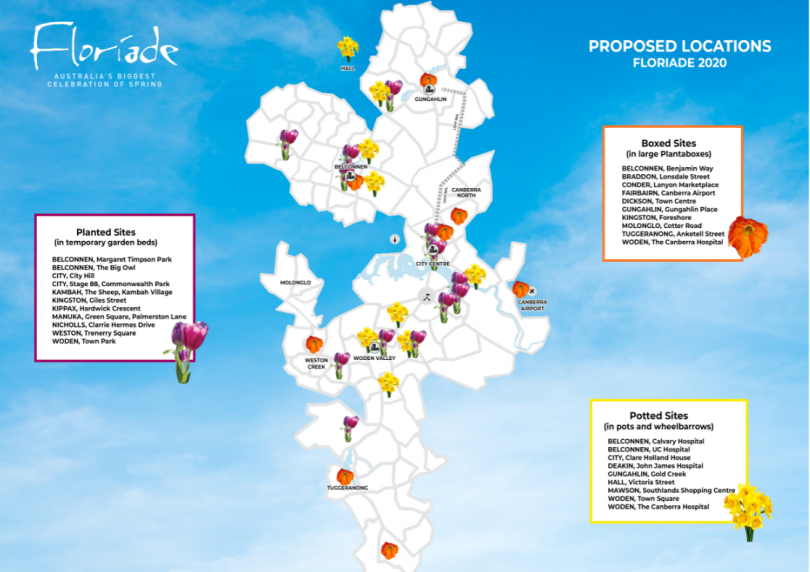 Some of the dozens of locations the one million bulbs will be planted this year. Image: Supplied.

“Community organisations have indicated that they would have space and a willingness to tend for them, so we are open to that, and there is a process through the Floriade website where people can register their interest.”

Applications are now open and close Wednesday, 6 May 2020. For information on how to apply and for a detailed list of locations, visit floriadeaustralia.com.

More details of Floriade: Reimagined, including the COVID-19 adaption of other components of the festival, will be released in coming weeks.

Regardless of where Floriade finally finishes up, where Canberra falls down and always has, is in it’s architecture. It doesn’t come within a bull’s roar of it’s town planning and landscaping.

I would rather this than the handouts to international students!

It's sad to know you place flowers as a higher priority than fellow humans, especially those who chose to come to Australia to contribute to our economy and are now stuck here.

Lee McDowall It isn't a choice. Both will happen.

can they come out to where people actually are during covid .... near our takeaways .... Palmo shops? Otherwise only empty trams will see them.

Denise Bourke So you didn't actually read the article.

Here’s a thought Mr Barr - we have a large vacant block of land right next to the pyramids at Margaret Timpson Park - you know the park - the one you keep telling us is hardly ever used - well the old Medical Centre has been demolished and the ground is bare. Wouldn’t it a better use of resources if you turned that into a mini Floriade?? It even has a depression which was the basement, which could provide a bit of visual interest, as well as a ready-made pond feature. How about it Mr Barr? We’ve been wanting to extend Margaret Timpson Park since you agreed to several more massive apartment complexes to be built within cooee of it, we need more green space within the Belconnen shopping zone to accommodate the numerous apartment complexes surrounding it.

We’ve written to you, we written to government ministers and we keep getting ignored. And now you want to ruin a couple of grassy knolls that kids actually play on. If you think the Park is under utilised, why on earth would you plant thousands of bulbs in a location that you already seem to think that nobody comes here?

Francesco Mazzoli thought it was u. 🤦‍♂️

The ACT government has been trying to destroy Floriade for years.

This year it is justifiable to have the flowers scattered across the city, but hopefully next year they will return it to its right place.

Spreading Floriade across the city will have a number of disadvantages:
. No longer a large joyous community and family gathering event;
. No longer a photographic spectacle;
. Fewer interstate visitors so less money coming into the local economy;
. An excuse for Barr to cut the budget of Floriade and divert the funds to his own preferred projects.

Dragan Gluhović - 6 minutes ago
Can't make everyone happy. He had a time to show his strength in politics View
Stephen Page-Murray - 25 minutes ago
Rooster James They used to vote Liberal... View
Mai Linh - 45 minutes ago
Nevil Kingston-Brown, we were just discussing that Barr’s Govt needed an effective opposition... View
News 32

Floriade 2018 set to be blooming marvellous