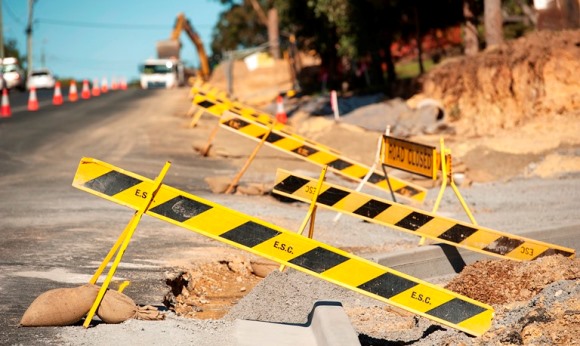 Work is continuing on a major upgrade to Beach Road, Batemans Bay, between the Princes Highway and Orient Street. Photo: ESC.

A major upgrade of Beach Road at Batemans Bay is underway, better linking the Princes Highway and Orient Street.

Works began this week to modify the car park at the Batemans Bay Visitors Centre. Step one will see a widening of Beach Road to provide an extra left-turn lane onto the Highway.

The car park is being reconfigured with the existing direct access to Beach Road removed. Part of the visitor centre car park will be closed while Eurobodalla Shire Council gets the job done.

Access to the car park will be retained via the Beach Road/Perry Street roundabout and Hill Street.

Works have also started near the Beach Road/Orient Street intersection to accommodate construction of a dedicated right-turn lane for vehicles turning south into Orient Street from Beach Road.

Council hopes the additional right-turn lane will reduce traffic congestion at the busy intersection as well as improve road and pedestrian safety.

Beach Road will be widened on both the courthouse side of the road and in front of the NAB Bank to make way for the extra lane.

A number of fig and gum trees on the northern side of Beach Road will be casualties of the work.

The existing car park on the south-western corner of Beach Road and Orient Street, outside the NAB Bank, will be removed and replaced with a new paved forecourt with the aim of improving the amenity of the area.

Progress is subject to the relocation of power lines and underground services.

Council says later works will include lengthening the two lanes in Perry Street that approach the Beach Road/Perry Street roundabout, the installation of new medians and pedestrian refuges and provision of two lanes exiting Mackay Park onto the Princes Highway.

The $3 million project is funded by the Australian Government’s Building our Future program and is geared towards the future redevelopment of the Mackay Park precinct, which includes plans for an indoor aquatic and cultural centre.

Council’s timeline for the staged project points to completion in June 2019.

Chris Ellis - 4 minutes ago
Why not design a stack hat that accommodates religious headwear. Win win View
Kerstin Mahoney - 27 minutes ago
What else would you expect from ACT Gov...this is not only dangerous but PC to the point of stupidity. How appalling😡 View
John Wilson - 46 minutes ago
Driving or being a passenger in a motor vehicle is a normalised life style choice, despite it being the most costly in regard... View
Opinion 127

Jaanos Eesti - 24 minutes ago
It means being thankful that Australia allowed my grandfather and mother to settle as refugees after WW2 and not wind up in S... View
Robert McMahon - 9 hours ago
Good to celebrate a nation that enables its citizens to openly criticise its institutions and national symbols. Many people w... View
JC - 10 hours ago
What about 1st Jan. Celebrate when Australia came into being when the colony became a federation. Nah won’t work that’s a... View
Lifestyle 13

Gary Fynmore - 4 hours ago
If outdoor pursuits is your thing I can highly recommend Braidwood Outdoors. Dare I say it but it's a fantastic 'man cave ' B... View
News 86

Monique Neejchee Jenkins - 5 hours ago
Absolutely, and getting rid of the school routes is utterly disgusting too. View
Julie Macklin - 7 hours ago
Jeff Smith Maybe you one of the people who will not drop what they expect in a house/unit (thinking first home buyers here) t... View
Jeff Smith - 8 hours ago
Considering the last house in Narrabundah with roughly a 450sqm block sold for $1.2 million and the last similar size propert... View
News 45

Jennifer Chalmers - 5 hours ago
Such a tragedy. View
Ulpu Niemi - 8 hours ago
Tragedy upon tragedy in this battle. 😢 View
Alison Crawley - 10 hours ago
Please consider a donation to this refuge - it will be used for the good of the wildlife. Thankyou. View
Sport 4

@The_RiotACT @The_RiotACT
Plans have been lodged for the second stage of Amalgamated Property Group's Civic Quarter commercial development on Northbourne Avenue at one of the city's key intersections https://t.co/SfxF3nIZN8 (14 minutes ago)