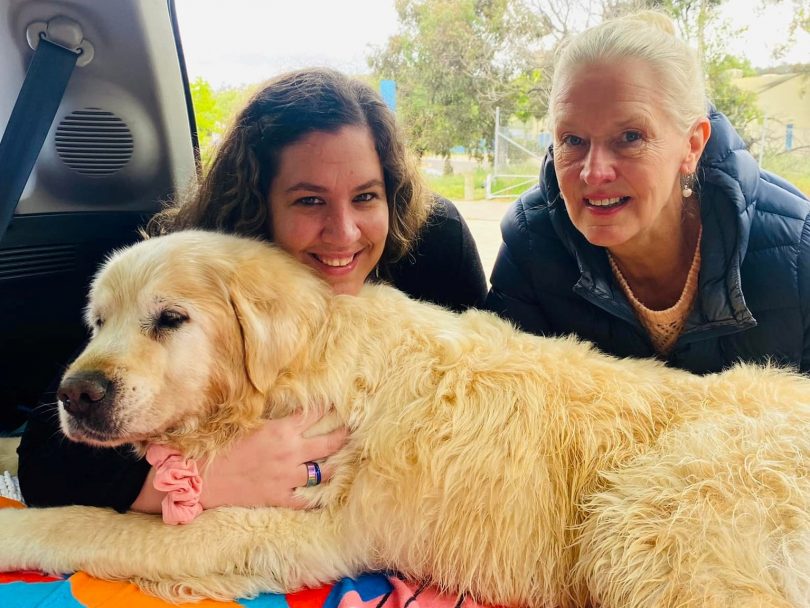 Jessica and her mum on the day they said goodbye to golden retriever Maxi. Photo: Jessica.

It was time for beloved dog Maxi to go, but his heartbroken owners are beyond grateful to a kind stranger who anonymously covered the veterinary bill.

Maxi was over 15 years old, a few years beyond the average golden retriever’s lifespan.

Sadly, age caught up with him, and it was time for owner Jessica to say goodbye.

“He had laryngitis paralysis towards the end where he couldn’t bark properly,” she says.

“For a golden retriever to live that long, he pushed through a lot of pain for us.”

They gently loaded him into her car and took him on his final journey.

“When we put him in the car, he knew. He had that sad face,” Jessica says. “He knew that it was his time.”

Maxi was an unexpected gift to Jessica, but she fell in love with the adorable golden retriever puppy.

For fifteen-and-a-half years he’s been by her side through thick and thin.

“Maxi’s been there through everything. He’s always been a dog who shows unconditional love and brings a lot of peace,” Jessica said.

“He brought a lot of comfort, a lot of purpose and healing for various traumas in my family as well, in a funny way.” 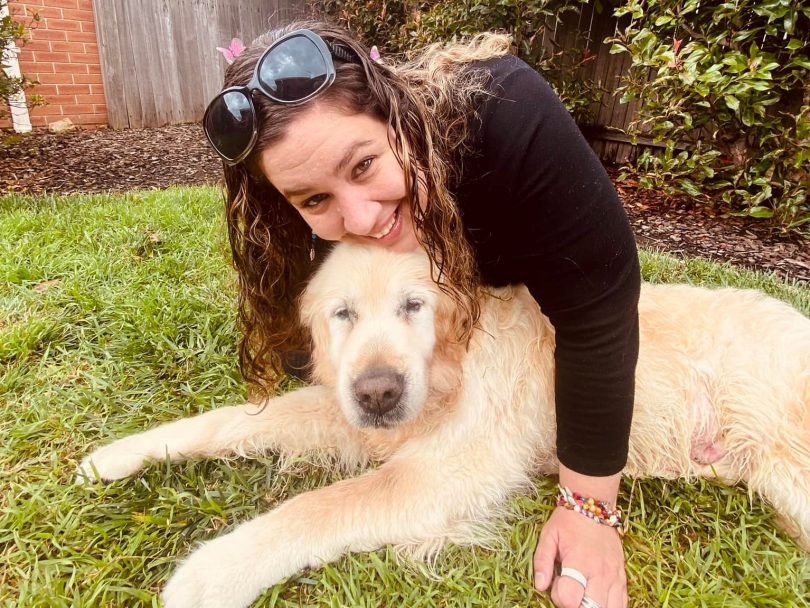 The house may feel a little empty now, but they’ll always have their memories of Maxi. Photo: Jessica.

When they reached Tuggeranong Veterinary Hospital on Maxi’s last day, he had to be stretchered from the car into the clinic.

“When we brought Maxi in, the receptionists were already crying. It was absolutely beautiful,” Jessica says.

“[The vet, Isobella] had baked cookies for Maxi. We gave Maxi some peanut butter cookies and some chocolate.

“She reckons every dog should try chocolate before they’re gone.”

Surrounded by his loving owners gently stroking his face, it wasn’t long before Maxi was gone.

“He looked like he was just so peaceful, sleeping. It was a very, very peaceful passing,” Jessica says.

It was at this devastating moment that they discovered a ray of sunshine.

Heartbroken and still in tears, Jessica and her mother went to pay the vet bill.

“The receptionist said, ‘it’s been taken care of’, we asked by who?” Jessica says.

“An older gentleman,” she was told.

“They didn’t even know the guy’s name.”

They’d met the man and his partner only briefly in the car park while carrying Maxi into the vet earlier that day.

He and his partner had stopped to offer their heartfelt condolences and had since left the clinic.

“Mum and I were beyond grateful,” Jessica says. “Mum was a little bit shocked. She was like, ‘Why?'” 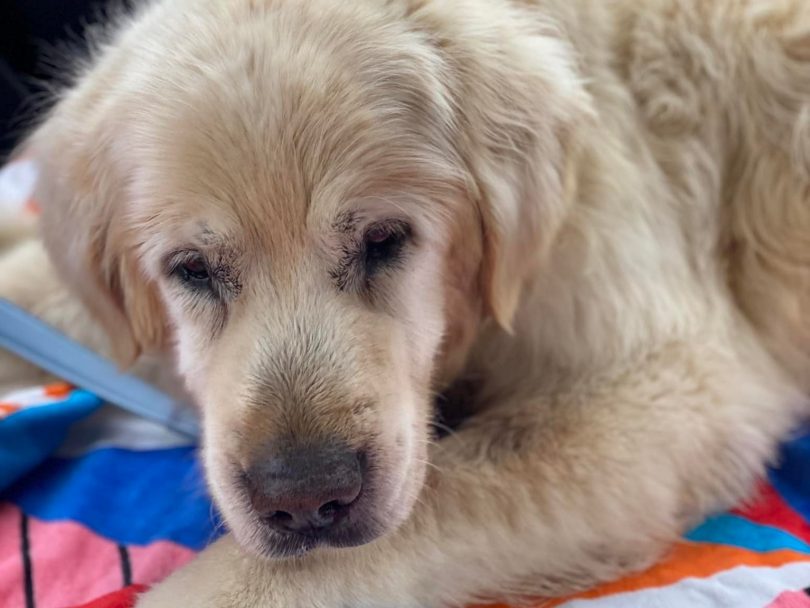 Maxi has been at Jessica’s side for over 15 years. Photo: Jessica.

The stranger’s act of kindness couldn’t have come at a better time.

Things are tough financially, especially in the lead-up to Christmas. They want to thank the stranger from the bottom of their hearts.

“We were so beyond grateful. We could not believe the unbelievable kindness of this man who’d just met us and just met Maxi.

The vet sent Jessica a card with Maxi’s footprints and she hasn’t decided yet whether to keep his ashes or spread them at his favourite park.

“Obviously, we miss him,” Jessica says. “It feels like someone’s in the house, but there’s no one there where he usually lies.”

The house may be a little emptier now, but they’ll always have Maxi in their hearts.

And the memories of one, incredibly kind stranger.

omg, the generosity and kindness of that gentleman me bawl – bless you kind sir – a reminder to me to keep paying things forward to everyone when an opportunity presents itself.
Thoughts & hugs to the fambam who said goodbye to Max.
Merry Xmas to the kind soul

A small dog cremation costs at least $250 on top of the vet’s fees.

Beautiful story to a heartbreaking situation. Losing your dog aka family member is absolutely devastating and to know that there are still good people out there who have provided a nice gesture to help ease your pain as much as they can at this sad point of time is beautiful. Thank you for sharing your story and that there are people out there with hearts and compassion. Xx

😭😭 what a nice gesture

During COVID lockdown, I dropped my pretty Cavoodle off at the Vet for an eye check-up and they came out 30 minutes later with an urn with the ashes of a dog. I was shocked and said no you have made a mistake, you must have the wrong car, my dog just went in for a checkup. They got very embarrassed. Very scary. I gave my dog lots of love on his safe return.

We felt the same way about our two golden retriever sisters. We were blessed to have one till 14 and her sister to 16. They were there for us through good and bad times, again providing total unconditional love!! Still miss them to this day. ❤️❤️ such a wonderful act of kindness from this stranger. Bless him!

What a wonderful thing to do.

Who says the world is mad…there are so many wonderful people, bless you😍