Before I die… we want your thoughts 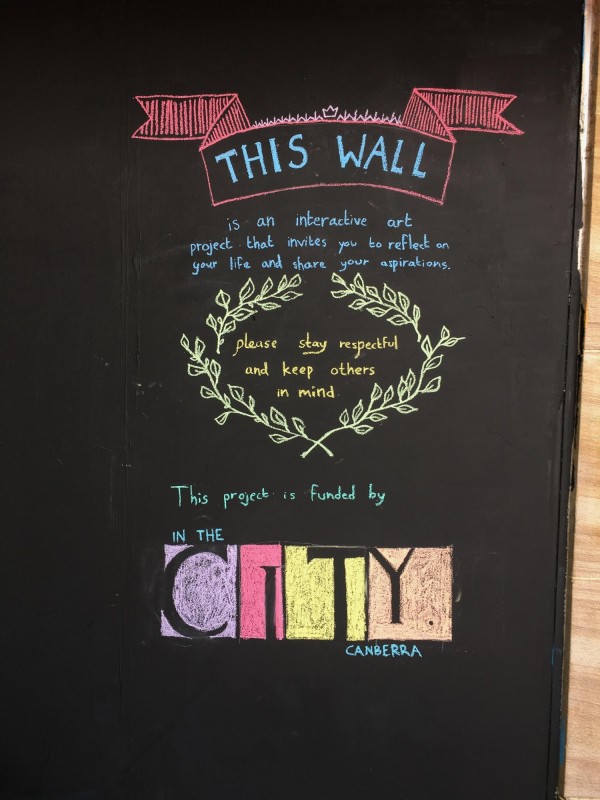 I was recently walking through Garema Place and became captivated by a huge blackboard that held the attention of passers-by entitled: “Before I Die…I want to…”. I immediately recognised this as something I had seen before….perhaps on YouTube or on The ABC? Digging a little deeper I found out that the originator of this concept was Candy Chang, who has a powerful TedTalk on the subject with 4,687,545 total views and well worth your six minutes’ attention.

So, here it was before me, in downtown Garema Place!

I started to read the board and the entries chalked up there. Inspired by a few of them, but I also became so disheartened by some comments that were so vile, on the darker side of graffiti, highly politically charged or just really negative (don’t we have enough of that?), and of course the downright ugly!

I was so upset to see that someone had put this board here in such good faith to be an interactive community board Canberrans could share; a positive place where one could share one’s hopes, fears and dreams. In other words, share what it is to be human and not to be so alone in our journey through life. It had worked well in other cities around the world, so why not here?

I realised that this must be something instigated by In the City Canberra, an organisation that is funded by a levy of the commercial citizens who operate businesses in the city, and so I trotted off to see them to find out more about this innovation and what had gone wrong.

Speaking with Hamish Lardi (Events & Projects Officer), and Jane Easthope (CEO of In The City Canberra), was fruitful in shedding light on the “Before I Die..” project, and I found out what went well, what went wrong, as well as what’s next for the city.

A little bit about the background of In the City Canberra for those who may not know about this organisation, will be a good starting point in telling their story. From their website the history goes like this:

“In The City Canberra started after a group of property owners approached the ACT Government with a request to start a business improvement district in the CBD of the nation’s capital.

To fund the new organisation, legislative changes were required so that the City Centre Marketing and Improvements Levy could be collected. A series of public consultations and media conversations preceded the tendering process for the City Centre Marketing and Improvements Grant, which was funded by the levy. In The City Canberra was the successful grant recipient and business commenced in the 2007/2008 financial year.

The levy is collected from approximately 608 commercial properties by ACT Treasury and is distributed as a grant less a nominal administration fee. All commercial property owners and their agents are potential members of In The City Canberra.

In The City Canberra is a not-for-profit business led by a Board of Directors. Three represent the Property Council of Australia and seven are elected.”

And as for this interactive blackboard project I had witnessed in Garema Place, the answer came via their latest innovation, their “Grants in the City Program“. Essentially, the goal of this program is to develop (and sustain) an active CBD through an accessible grants program for citizen-based place-making. The funding made available for this innovation is currently $340,000.

It turns out that the “Before I Die…” wall was an initiative from a 19-yr-old university student, Sydney Farey (who is studying Arts at the ANU), and an amazing young lady, I was told – “a lovely, bright and creative student” according to Hamish, who applied for the public grant and was successful in receiving $2,000 for this project. The grant was to put the board up and maintain it through from November 2016 to February 2017.

It was a novelty from the first day it went up. “You should have seen people’s faces,” said Hamish. “They didn’t quite know what to do at first, but then interestingly enough, it grew organically and became a great success, initially. It was a brilliant idea and for the first couple of months it worked really, really well.” 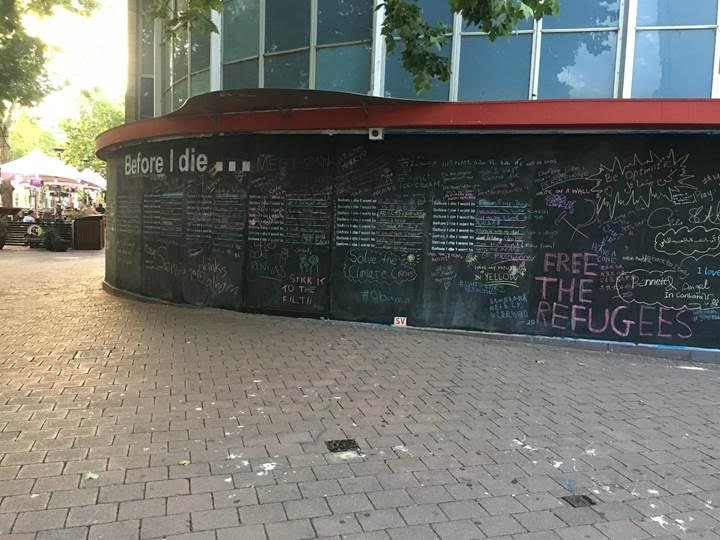 But the wall needed so much personal maintenance and over the Christmas/January period, it was difficult to maintain by one person alone. Maintenance was the only issue with this project. It’s a fact that if you remove graffiti you take away the likelihood of others joining in to post more negative comments.

“To be fair”, Hamish said, “No one could have envisaged how much it would take to maintain such a large board.

Someone had to monitor it twice a day – and for $2,000, it really was not very viable. But Sydney was brilliant, looking after it well for the first few weeks, and the great news is that she did get an arts internship out of it.”

What had been disappointing, though (I had thought when I first saw the blackboard), was those who sought to write that negative stuff on there in the first place. One tends to ponder, who would write such deeply negative things? Jane thought that perhaps the Trump issue may have elicited some of the political comments, and another view is that perhaps one could imagine that people leading desperate lives would think differently from others in the community who are better off. It’s understandable that their view of life might be less than positive. 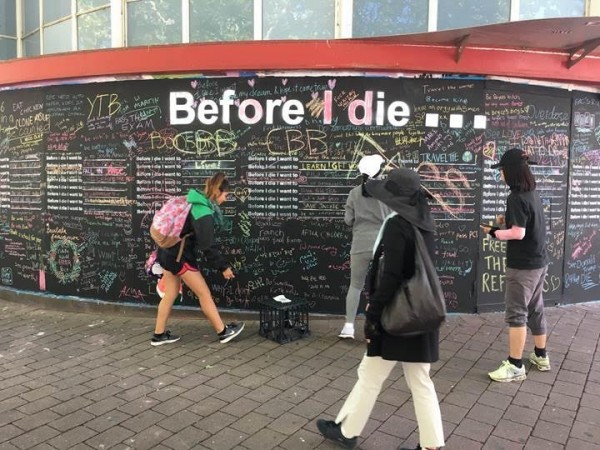 And hats off, to the In the City Canberra organisation, for their innovative grants program.

What’s next? There is a new innovative, interactive blackboard going up again (a little smaller this time), asking a new question: “Favourite Place to eat in Civic and Braddon?”, with the hope that people would name their favourite local city restaurants etc.

Jane Easthope opened it up to The-RiotACT readers to suggest some other questions they would like to ask Canberrans on this interactive blackboard.

Have you any suggestions you’d like to see them ask and that you think people would be interested in responding to?

Tim McGraw is a famous country singer, so don’t miss the possibility to visit http://timmcgrawtourtickets.com/