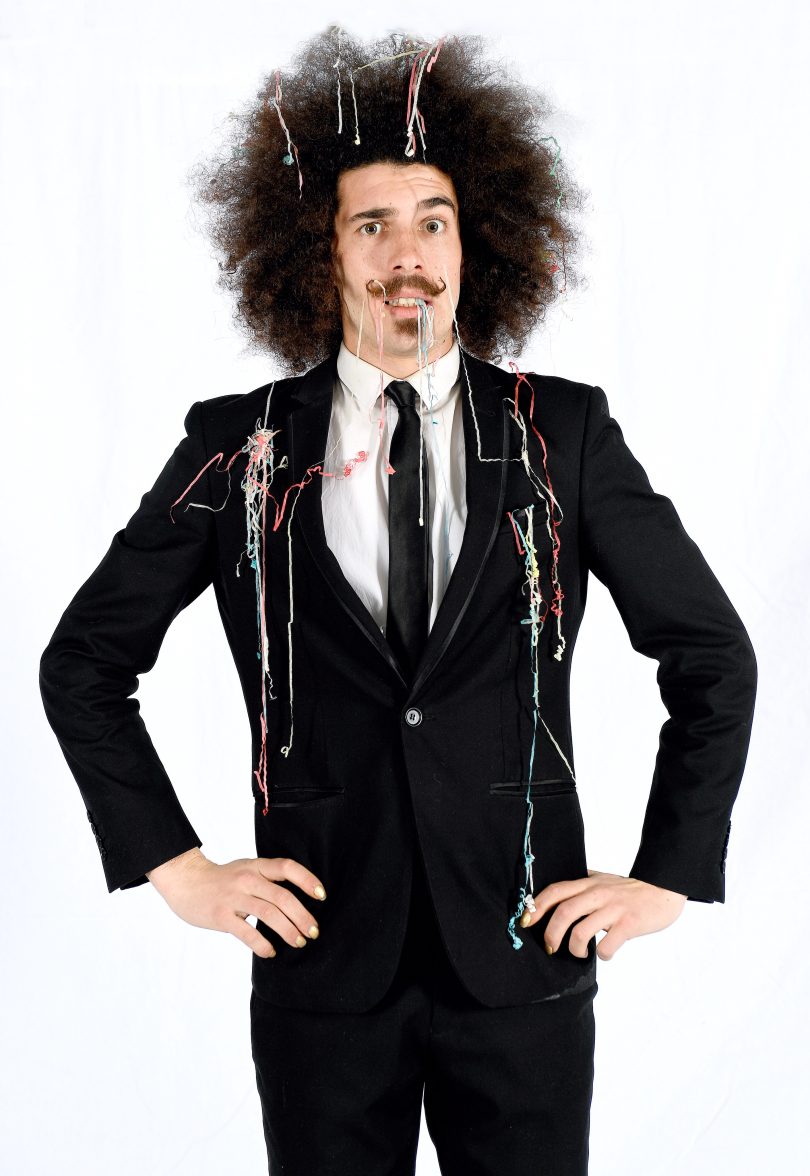 Rhys “The Trickster” Davies, fresh from his time in Melbourne. Photo: Supplied.

Rhys Davies is home in the Bega Valley, having spent 2017 performing tricks and gags on the streets of Melbourne – and growing his hair!

His January 3 gig at the Kick Back Relax Family Twilight Festival at Merimbula’s Magic Mountain is a chance for fans old and new to see what heights his talent and skill have climbed to.

At almost 19, Rhys – AKA The Trickster, is a seasoned performer. As a baby-faced 13, 14, 15-year-old, crowds would gather at the Candelo Show or Tilba Easter Festival to name a few, to watch Rhys juggle a chainsaw, pull a balloon in and out of his sinuses, vomit streamers, and dish out well-placed gags. 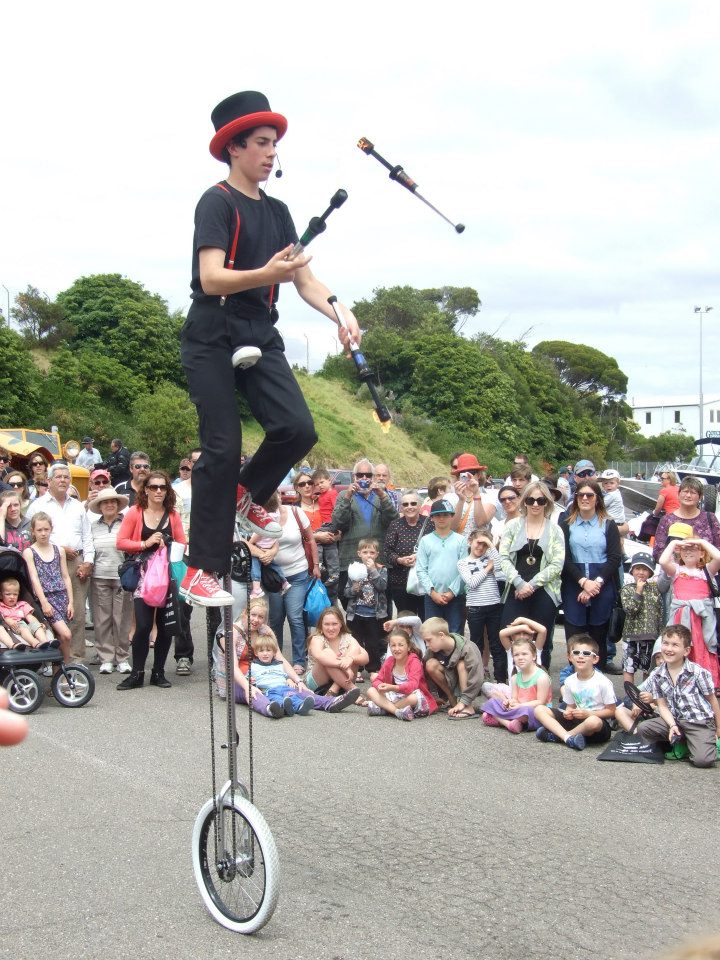 A fresh-faced Rhys in 2012 pulling a crowd at the Eden Whale Festival. Photo: Rhys Davies Facebook.

His mostly self-taught show of extreme juggling, happy magic, and cheeky comedy has always stood on its own feet but in those earlier years especially, it was his obvious drive to be a performer that pulled people into the circle around him to watch. You could see Rhys learning his craft, developing his act, and building confidence. And when the show was over you not only cheered in gratitude for the entertainment but also out of respect for a young man putting himself out there.

“Audiences in the Bega Valley are so warm and loving,” Rhys says.

“I probably wouldn’t have kept doing this if I hadn’t grown up in the Valley, their support has been really important.”

In the last two years, his growing ambition and talent have taken Rhys beyond the familiar faces of local shows and fairs.

In 2016, with the backing of his maths teacher mum and singer-songwriter dad, Rhys ditched years 11 and 12 at high school and ran away with the Circus Aotearoa in New Zealand. 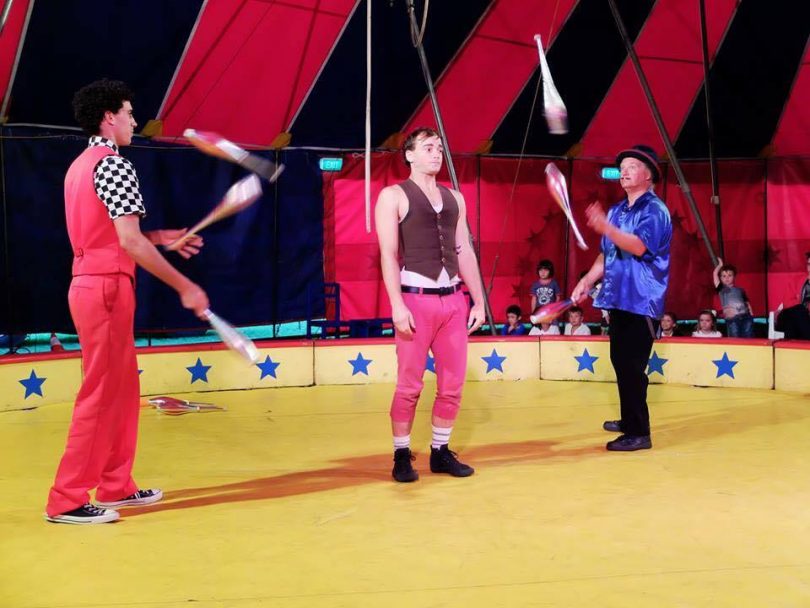 The massive Woodford Folk Festival in Queensland followed, working with sideshow outfit Deja Voodoo, but with the dawn of 2017 Rhys created fresh opportunities for growth, looking for new audiences to have fun with and (in a nice way) make fun of.

This country boy has been surviving on the streets of Melbourne as a street performer, living on his wit and daredevil attitude outside Flinders Street Station at Southbank.

“A lot of people look down on street performing as a fairly low art form – or not even an art form,” Rhys laughs.

“Some people consider you as a beggar, I’ve had people buy me bottles of water and food, which is lovely but I don’t think they quite get it.

“The street is one of the hardest places to perform I think, it takes a long time to develop the skills to work shows on the street – you have to gather a crowd, make them stay, and then hopefully get them to pay,” he says.

Three men with clipboards overseeing Melbourne City Council safety regulations forced Rhys to change his act, his trademark chainsaw juggle was too great a risk – he needed a new climax to the show.

“So now I’ve got this big three-metre pole, four audience members hold onto ropes attached to the top to stabilise it, I climb up and juggle fire and knives,” Rhys explains.

It’s a routine that has been paying its way, funding food and rent in Melbourne, even a recent holiday in the UK, while at the same time building a future. The experience has allowed Rhys to refine a show he can take to the streets of capital cities around the globe in 2018.

A new maturity has also been evolving, with Rhys developing a contemporary adult show to complement his popular family-friendly show.

“Recently I’ve been trying to do a bit more stand up comedy and mixing sideshow and circus with surreal humour,” Rhys says. 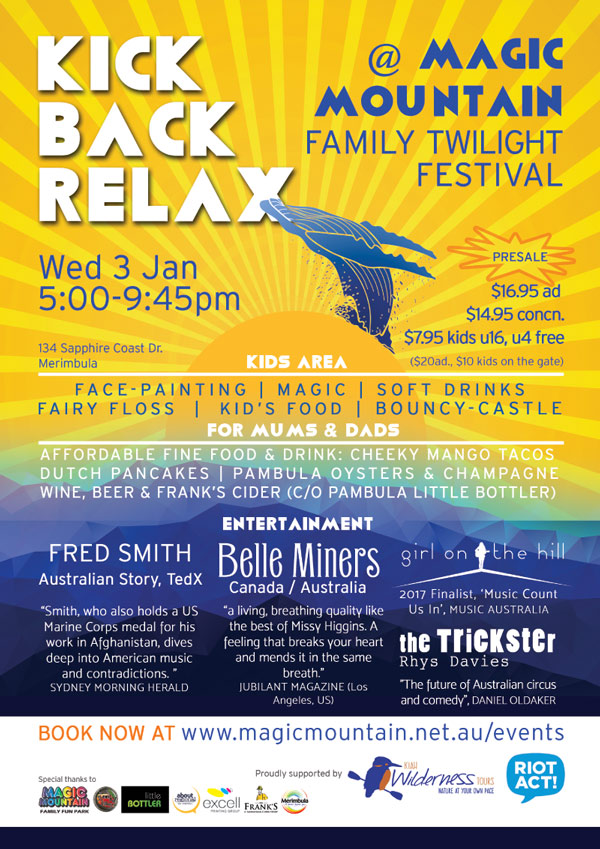 At the Kick Back Relax Family Twilight Festival at Magic Mountain on January the 3rd, Rhys will be performing with Australian – Canadian songbirds the Belle Miners, NSW singer-songwriter, raconteur, and TEDx star Fred Smith, and young Melbourne based singer-songwriter Sadie – Girl on the Hill.

The hometown gig will be followed by work at the Adelaide Fringe Festival, “And my big hope is that in August I’ll be able to go to the Edinburgh Fringe Festival for street shows and comedy spots,” Rhys says.

There is some magic about Rhys Davies that goes well beyond pulling a rabbit out of his hat, whether you strike him in Merimbula on 3 January or on a street corner anywhere in the world during 2018, stop and soak a bit of it up. 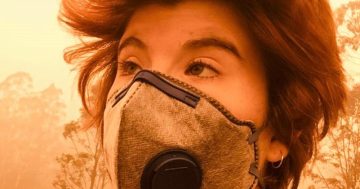 Lives on hold: how young people are faring in a COVID-19 world