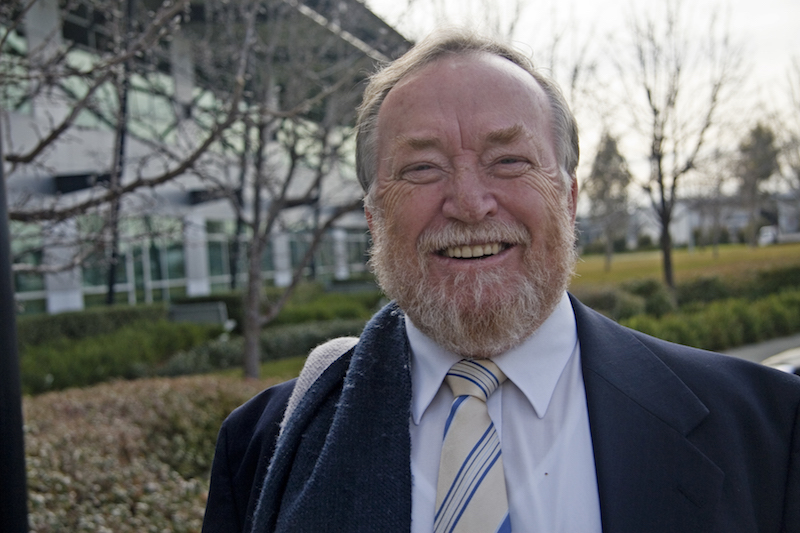 In cycling and the property business, Noel McCann counts his good fortune to have met extraordinary people. As a young cyclist from Port Kembla where his parents had a pie shop, he trained alongside champion cyclist Kerry Hoole.

The elite cyclist and valuer, who set the fastest time in the Goulburn to Sydney Classic five times, changed McCann’s life one night.“He kept saying you want to think about being a valuer. The Valuer-General is always looking for people”.

So McCann did, approaching the role the same as cycling, learning from the best he could find, which led to Terry Snow, a developer determined to build the world’s best small airport.

Twenty-one years ago, when Snow paid $65 million for the Canberra Airport, conventional thinking was he paid far too much money and would go broke. McCann, thought the opposite. He sold his remaining business interests and joined Snow and his son Stephen Byron for the ride of his life.

“After the success of the tender it was pedal to the metal trying to understand the animal (airport) and get our first draft of the master plan out in November 1998,” he says.

McCann’s decision to work with Snow was far from a flight of fantasy. It was based on his life’s experience to that point. Enrolled with the Royal Melbourne Institute of Technology by correspondence, McCann came across Rudy Rost, a former Valuer-General in NSW. It was perfect timing for a young man learning the profession.

“Mr Rost took an interest in nurturing me along. We built a relationship where whenever he was in the Riverina doing something, I would drive to where he was and go through assignments. He would keep assignments and talk me through them. ”

“He told me to challenge what you are given. Whatever your outcome is, back it up. Research what you are doing. Be confident because you have the research for it.”

McCann worked in Deniliquin, and other far-flung areas, but when there was talk of a transfer with the Valuer General’s to Cobar, he and his then-wife Lola (who passed away in 1988) decided to move to Canberra.

Away working in the Snowy Mountains one day, his wife Lola rang, saying a Canberra businessman needed to speak to him urgently.

Snow needed evidence in a valuation appeal against the Crown Valuer’s change-of-use-charge. McCann helped reduce the fee and a relationship began which endures today.

He joined the team fulltime in 1998. At the time, property observers had no insight into Terry Snow’s vision for the airport. But Snow was acutely aware income-generating assets were needed to fortify the airport against industry volatility.

“It was daunting. It took a couple of years to get the focus right,” McCann says. “We had the draft master plan out with plenty of flexibility in November, got it approved in August 1999. We needed the business park for income stability.”

When the first business park buildings were leased for office space, people stopped saying Snow had paid too much for the airport to the complete opposite – the Australian Government had given it away.

McCann says these days Canberrans don’t see the airport terminal as Snow’s business. “It is their airport and they are proud of it,” he says.

“The NSW Government now recognises three global gateways by air, Sydney, Newcastle and Canberra. That has been a big journey to get NSW to think about Canberra”. The runway is only at 30 per cent capacity, the terminal has been built for 8 million and can expand to 12 million.

Since arriving in Canberra McCann, now regarded as the city’s property guru, has watched families like the Snows replace national and multi-nationals building the national capital.

“If you go to auctions, who buys things? It is Ivan and Jure Domazet, the Greeks like the Sarris family, the Liangis family who started with a shoe shop in Fyshwick, Graham Potts, Barry Morris and Tim Efkarpidis and their families.

“All these people in the last 15 years have become major players. They are sophisticated, at the same time they are simple, they actually know a good deal from a bad deal.

“I remember Croatians Ivan Krizaic and Ivan Domazet working out of their ute, their office was the passenger seat, that was back in the early 80s,” McCann says.

At the airport today, McCann enjoys working with the young professionals, having their input, getting a diverse range of views and coming to a group outcome. He reads extensively, broadening that foundation that helped a dream for an international airport take flight.

What an interesting article, thanks!

Bob Jones - 3 hours ago
Deb Wheare And Lynne Meredith... I've heard because of the more right someone who identifys as being an Aboriginal or Torres... View
Kev Martin - 13 hours ago
I find If you stop breaking the law, you don't get locked up View
Deb Wheare - 24 hours ago
Jacob Torresan face palm View
Property 14

Pari Gilmour - 14 hours ago
I support a burnout pad. Zero interest myself but obviously these guys need a social space to do their thing. Happy to suppor... View
Opinion 33

During the 'unprecedented' year we all experienced in Canberra during 2020, lots of new words and emotions entered my vocabulary....
Food & Wine 108

Kathleen McCann and her garden still ‘growing’ 12 months after bushfire

@The_RiotACT @The_RiotACT
From exquisite handmade jewellery to high-end homewares, there’s no end to the tantalising treasures to be found in the shopping paradise of Bungendore https://t.co/2kwXuEVseH (4 hours ago)

@The_RiotACT @The_RiotACT
Book a seat for Kambri Film Fest 2021, a free festival that celebrates and elevates the contributions of creative women in the film industry https://t.co/5oivpfnWaq (14 hours ago)