Behold the solar industry and all its supporters! 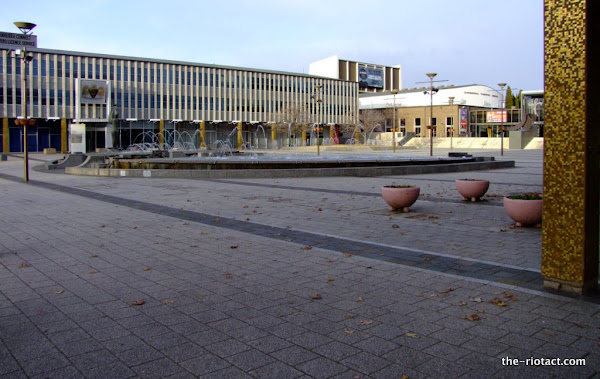 Last week the solar industry announced they would be protesting outside the Legislative Assembly this morning at 8am against the capping of the feed-in tariff which has effectively shut them down.

So your correspondent got out of bed early on the darkest day of the year and made his way down to the Assembly to take in the massed fury of the solar industry.

The photo was taken at 8:05 this morning.

Perhaps they stayed away because of the bad conditions? Is that some sort of metaphor for the reliability of wind and solar?

UPDATE: Apparently 20-30 very quiet protesters were around the other side of the building in the hope MLAs arriving to work would see them there.

9 Responses to Behold the solar industry and all its supporters!
Filter
Showing only Website comments

Hardly Al, when holding a protest at the Legislative Assembly I’d say holding it where protests are held is a pretty sensible thing to do.

All protest is a gesture of political impotence. If you’re still in with a shot you’re inside the building having tea and biscuits.

So they’re in the wrong place, the metaphor gets better and better.

Seriously John? I simply read the media release in the article linked to in this thread and it clearly says, right there in the middle of a one page release – no scrolling down required:

Members’ entrance – that is – where the members enter. Why else would they be there at that time if not to make sure they are seen by the MLAs?

If they got together on the other side (where your photo was taken) you’d be chucking off about how dumb it is to be holding a protest where no-one of importance will see it.

Is that some sort of metaphor for the reliability of wind and solar?

Sadly, at this time in history, yes.

In Johnboy’s defence, the details about the actual location of this event (ie the other side of the building from the photo) were in the media release but required scrolling down to read. They also did not supply a map.

I’m sure the organisers will be able to supply images of the actual event to replace the above photograph and item heading.

So they’re in the wrong place, the metaphor gets better and better.

According to one of my work colleagues who was there “you are a fool for being there” because it was on the other side of the building where the MLA’s enter.

There are about 20-30 people around the other side of the Legislative Assembly (where the carpark is). I walked past them this morning on my way into work and was wondering what it was all about…

Mark J Avery - 32 minutes ago
Try working next door to this dumping ground!! View
Roger Kropman - 4 hours ago
This is a disgrace but it reinforces the point that rubbish dumps / tips should be free to dump your trash, otherwise idiots... View
Nick Savino - 8 hours ago
CCTV and fine View
News 14

@The_RiotACT @The_RiotACT
Snapper at the Canberra Southern Cross Yacht Club is getting a makeover. Check out the plans https://t.co/Ul1f9X7YUR (29 minutes ago)