Being ‘Loud in the Library’ with a ukulele 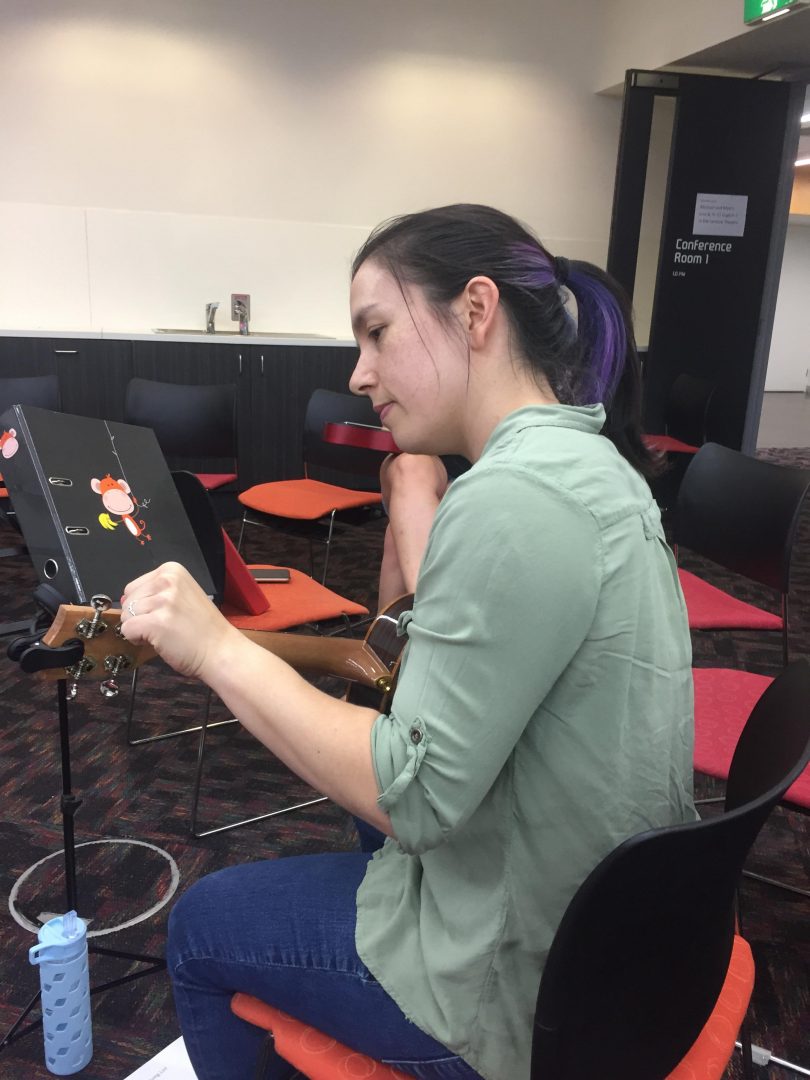 Learning to play an instrument is hard. But having a group of friendly-faced enthusiasts helping you out makes it easier and it’s for free.

This is what the ukulele group Loud in the Library do every second Monday of the month.

Keen to find out more about the group and maybe learn a chord or two, I found their practice room in the Gungahlin Library.

The room sported white walls, a white roof, white school desks and glowing in the centre were 14 red cushioned chairs.

Then I noticed the smiling face of organiser, Jasmine Fellows. Her long black hair with a splash of purple was tied in a ponytail as she helped a young lady tune her ukulele.

Jasmine greeted me with a wave and let me know that she had spare ukuleles if I wanted to join in, or I could sing-a-long with the songs, or just sit and watch.

Not ready to play yet, I sat down next to a guy who was getting his song sheets out of his bag and enquired how he got into playing the ukulele?

He told me that he started by playing the guitar and decided to buy his kids some ukuleles to play along with him. As soon as he bought the ukeleles, he found himself wanting to play one as well. “It puts a smile on people’s faces, it’s just one of those instruments,” he said.

Soon after our conversation, the room filled up and a discussion started about song selection. Then ukuleles started to strum and happy faces started to sing.

Halfway through the session, there was a 10-minute intermission where TimTams were given out. I decided to talk to Jasmine and learn a little more about the group.

I began by asking what got her interested in playing the ukulele? “I started playing the ukulele because I have a young daughter and I thought it would be a good instrument to play along while we were singing songs together. I started off playing simple nursery rhymes and branched out into some more modern stuff,” she said.

Then I asked how ‘Loud in the Library’ came about? Her hands gestured forward as she explained, “There were a few weekends where I would get together with friends and play, and I also had a chance to play with the local band URoc which is a similar community group.”

She then spoke about how she wanted to move away from playing the older style of music that URoc played and form a group that played more modern music.

Do you play any Taylor Swift?” With a laugh, she said, “Yeah, we do Shake It Off.”

Could you tell me a little bit about the group? “On any one evening we can have six to 14 players, so it varies from fortnight to fortnight. There are lots of different skill levels, we have beginner to more experienced players. It’s a good learning opportunity because everyone can learn a little bit from everyone else.”

What impact do these groups have in the Canberra community? Her eyes lit up as she answered, “It brings together people who would not meet necessarily. We have people who are travellers come through and find friends and support and we keep in contact with them via social media. It’s the opportunity to do something a bit different. Our group is a free group, we don’t charge, so it’s accessible to everyone.” 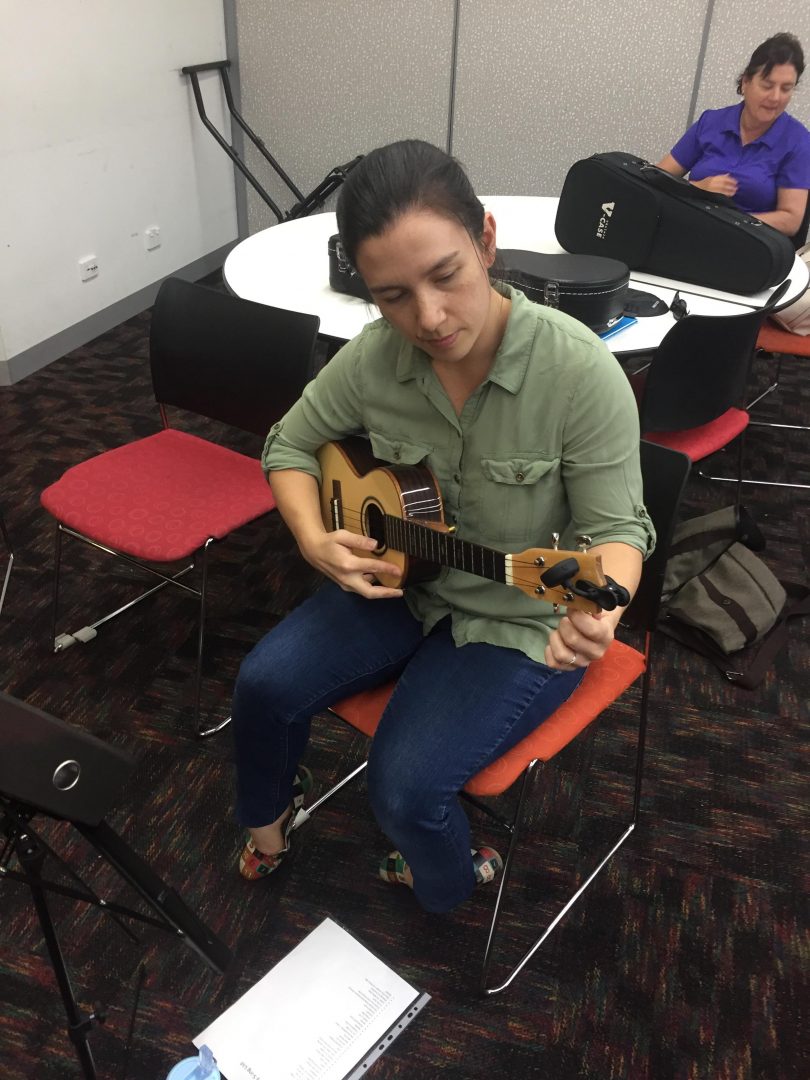 I then asked what advice she would give to someone who wants to learn how to play the ukulele? “It’s pretty easy to get started; there are a lot of YouTube tutorials, also attending a group like Loud in the Library to ask other members how they have approached their learning is also a good way to learn.”

Then, feeling a little nervous, I asked if I could borrow a ukulele? With a smile, Jasmine said, “Of course.” She walked over to a table and grabbed me one from her bag.

As I sat, ukulele in hand, a lady with curly brown hair next to me shared her song sheet and quickly taught me a few chords. She taught me C and A minor, “These are some good beginner chords,” she said.

Then the group started strumming Losing My Religion by REM, I found myself relaxing and no one cared if I missed a chord.

After the session ended, I left the library excited that a group like Loud in the Library existed – a group where you can meet new people and learn in a welcoming and friendly environment.

No matter how musically challenged you are.

The group practices fortnightly on Monday nights in the Gungahlin Public Library at 7 pm.

For more information go to the Facebook page or email gungahlinukuleles@gmail.com.

Until retirement, my only contact with libraries was through universities and like institutions. They were quiet places, so imagine my surprise when joining the local library to find pseudo kindergarden classes drowing the place out in noise.

A friend told me to toughen up, part of the new world order.

I wish the ukulele group “Loud in the Library” all the best. Its name is what spurred me make this comment.

Peter Jovanovic - 2 minutes ago
So if it all gets too hard for the parasitic landlords and their parasitism isn't as lucrative as they hoped they'll just dem... View
Peter Jovanovic - 6 minutes ago
Jilly Beans big bootlicking energy there. View
Lee ONeill - 45 minutes ago
Albert Jacka perhaps read the article. View
News 225

Kit Oates - 14 minutes ago
Sounds like it could use reviewing to ensure its safe, though given the extent of the damage I have a strong suspicion that i... View
Rebecca Russell - 1 hour ago
Francie Bennett yeah I did too . View
Donna Robinson - 1 hour ago
A big Happy birthday to my dear friend Anne. Have great day View
News 3

ChrisinTurner - 25 minutes ago
It is interesting that our governments promote densification while at the same time moving government services away from the... View
austted - 3 hours ago
This is a mean and miserable decision that makes the Centerlink service in Canberra go from bad to worse. Probably happening... View
Brianna - 5 hours ago
This is going to be a disaster for so many vulnerable people who live in the city and it's closer surrounds. I know for a fac... View
Property 42

Dale Janssen - 2 hours ago
Greg Myat the speed limit was dropped from 60 to 40. View
News 7

dingus_maximus - 2 hours ago
Not to mention, halfway through our lockdown, moving the vaccination rates to include 12 and over where every other jurisdict... View
chewy14 - 3 hours ago
JC, Yes, the national plan that NSW are following more closely than Barr and the ACT government were and are. The national pl... View
buzz819 - 4 hours ago
Why can't the gubment use the same terminology as the rest of Australia in relation to transmissions??? Linked, or under inve... View
News 1

54-11 - 3 hours ago
They say that when the cause of a fire cannot be determined, just follow the money. View
Opinion 3

chewy14 - 5 hours ago
The Federal Government has paid out hundreds of billions of dollars of support payments throughout the pandemic so to claim t... View
Business 10

Music’s charms soothe the savage beasts at the National Zoo

@The_RiotACT @The_RiotACT
Chief Minister Andrew Barr said the ACT's new pathway out of #lockdown was triggered by hitting the 80 per cent #vaccination target and not a response to changes in NSW https://t.co/ZVeJRxndHb (12 minutes ago)

@The_RiotACT @The_RiotACT
It's been quite a journey for the Nimmity Bell, but the tiny #Monaro community will finally #celebrate on Saturday after a long and improbable saga https://t.co/8xTA8gFR4V (2 hours ago)