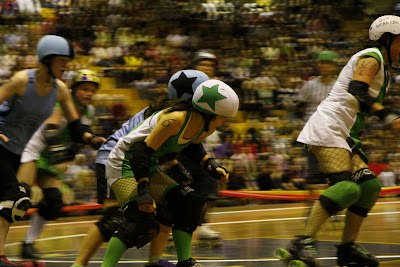 The Black and Blue Belles took out the second game of the Canberra Roller Derby League season on Saturday night with a convincing win of 132 to the Surly Griffins 121 in front of a 1000 plus strong crowd.

The Belles took the lead early on, with two big point scoring jams by Shaggle Frock and Cassatrophic, and managed to keep their lead all night thanks to strong defensive game play.

Surly jammers Bambi von Smasher, Sue R Rat and Shortstop pushed hard to bring in the points, but aggressive tactics by Belle blockers kept them trapped behind the pack long enough to ensure Belle jammers regularly took the lead and controlled the game.

The Belles played a quick and conservative game, and on more than one occasion called off jams before they had scored to lock out Surly point scoring opportunities. Stand out Belle blockers included The DutchAss and Trixie Dynamite, with team captain Melicious Damage proving to be an excellent pivot.

Surly blockers focused on assisting their jammer, with the crowd erupting several times as Shortstop took whips off von Smasher to break through the pack. Some of the Surly’s best defensive work of the night saw them building walls, trapping Cassatrophic with a solid can-opener move that resulted with Cassatrophic in the penalty box thanks to excellent pivoting by Bullseye Betty.

Saturday night’s game was also full of big hits, with players from both teams taking tumbles, including several multi-player pile ups. This was made more impressive by leaps from both Ova Bearing and Cassatrophic dodging the carnage on the track. The bout was halted twice due to injury, with Sue R Rat and Peachy Keen both checked by the medic before re-entering the game to loud applause.

This bout introduced first time players for both teams, including new star jammers Shortstop for the Surly Griffins and Cassatrophic of the Black and Blue Belles. Both players regularly took lead jammer status when they lined up to play and both displayed outstanding lateral movement when cutting through the pack. Fast point scoring Shortstop found holes in the pack every lap, while Cassatrophic’s low, efficient speed is unmatched.

Saturday night’s win for the Belles returns the teams to a level playing field with one win apiece in time for the season decider later this month.

It was a lot of fun and there were a lot of spills.
@feathergirl I heard a rumour that there might be a second release of tickets, but am not sure how certain that rumour is.

wrestling and derby would be an interesting mix.

It was a fantastic game. The little jammer girls are super fast and all the girls must be exhausted by the end of it all.

Unfortunately the third match of the season is already sold out. Well, unfortunate for me, but fortunate for the girls, hope they are all getting a cut of any profit as they deserve it.

Now if they could just combine the local wrestling with the roller derby, I’d pay extra to see that.

Another fantastic bout, if you’re keen get tickets for the end of month decider, as they will probably go fast.

Both teams put in a hearty effort and obviously were working very hard out on the ring, which was much easier to see when I took a moment to get closer to the action than the stadium seating usually allows.

Special props to the very young lad who provided an impromptu dancing addition to the drumming troupe that provided the half time diversions.

Alex Petrow - 9 hours ago
Easy Purgy!! Double the speed limit. Because you will be on the road for half the time, the window for prangs is also halved!... View
Roderick Saunders - 10 hours ago
Kirsty Noad Canberra's had the log book assessment system for years. I think you only needed 20 hrs with an accredited drivin... View
Jason Thornthwaite - 10 hours ago
Good driving= no parking fines, no speeding fines, no accidents...pretty simple, but a positive amongst all these negative co... View
Community 2