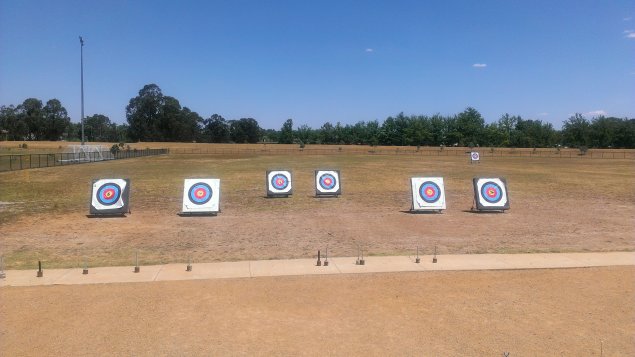 This is what I eagerly await to hear when lining up on the archery range. Three arrows don’t take long to dispel and I am super keen to try and practice the next round as soon as I can.

Braving the heat of Sunday (I lie, I love this hot weather), I took to the “Come-and-Try” beginner sessions available at Tuggeranong Archery Club and the Canberra Archery Club in Lyneham for this week’s Best of Canberra. 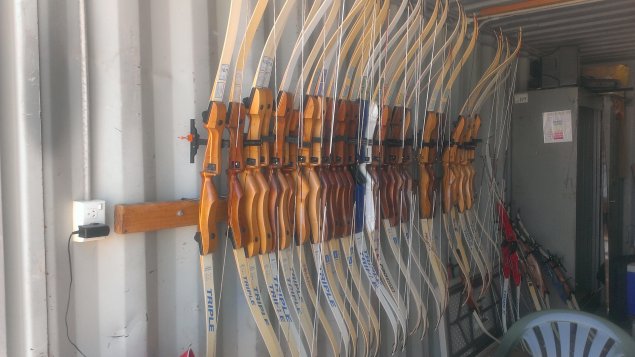 First up, nice and early was Tuggeranong where I was quickly fitted out with bow, arrows, bracer and finger tab. The bracer is an arm guard that covers the inside of your bow arm so that you don’t end up black and blue from the release of the bowstring. The finger tab protects the first and second fingers from pressure applied when drawing the bowstring.

The instructor took me through the proper way to stand, hold the bow, string an arrow and how to shoot. With the basics in hand we were left to our own devices to try and hit the target as best as we could for the rest of the session. The instructors would occasionally provide input on how to improve a shot, which was gratefully received.

There were various targets to aim for which kept things interesting; Christmas trees, Santa, zombies and a teddy bear reminiscent of William Tell’s son – apple on the head and all. It seemed to be a favourite! Balloons were also incorporated to try for a satisfactory burst.

I managed to avoid the “walk of shame” (when your arrow has flown over the target and into Neverland). Not bad for my first session! 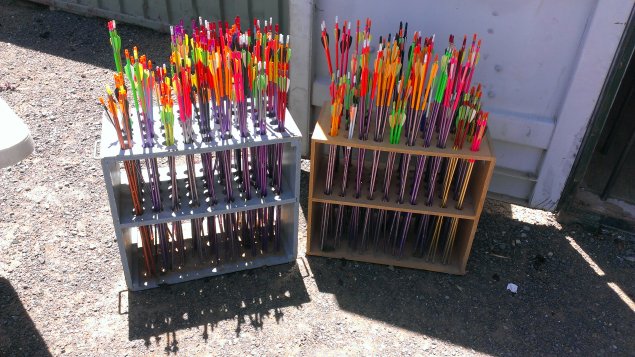 After that I was keen to try out an afternoon session with the Canberra Archery Club in Lyneham. Unfortunately, I was the only Canberran who wanted to be outside in the 37-degree heat and the session was therefore unable to proceed. However, I did get a feel for the place.

The oldest club in Canberra, it has been through quite a bit of movement around the area and is now conveniently tucked away next to the Lyneham Hockey Club. It is a small field but seems to be a favourite for the more expert archers and I understand that the earlier sessions were quite well participated in. Shipping containers host the equipment and standard bullseyes provide as the target.

The deciding factor between the two is the better facilities available at Tuggeranong Archery Club, with shade covering where we stood to provide relief from the hot sun and a canteen for refreshments and so I have awarded it with the Best of Canberra tick of approval.

I found the “Come and Try” archery sessions to be a great weekend activity and $15 (cash only) for an hour and a half of shooting is a great deal – check it out for yourself!

There is also Monaro Archers who have ranges at both Queanbeyan and Bungendore and learn to shoot is only $10 and is held every Sunday during school terms at Queanbeyan and twice at month on Saturdays at Bungendore.

I have always wanted to attend the come and try day at Tuggeranong a go for something different. I never really knew it was there until I was riding my mountain bike from Kambah Pool to Pine Island, I stumbled across their shooting fields which almost looked like a golf course where targets would be hung from trees and the field would make you shoot over a water feature.

Capital Retro - 1 hour ago
I was surprised to hear a secondary school student tell me that teachers are now telling students that they have rights and e... View
Kasra Mn - 10 hours ago
At what $$ point is someone wealthy? View
Anita Patel - 11 hours ago
An excellent article. View
News 2

ACT resident - 2 hours ago
This latest CRS thought bubble promises flammable construction waste to be diverted from landfill and delivered for processin... View
simm - 16 hours ago
FYSHWICK is the wrong location for a high volume waste tipping station where that would interfere with surrounding investment... View
Opinion 1

Capital Retro - 2 hours ago
Like the cosseted and tax free cyclists in the ACT, the EV lobby apparently want the same treatment. View
Community 3

rationalobserver - 3 hours ago
Its not just cars, all sorts of things now use our roads and it should be a shared cost. Usr pays and all that. In some subur... View
cycladelec - 11 hours ago
Plenty people with much more informed views than that Riot ACT know that now is not the time to impose a Road User Charge for... View
MERC600 - 20 hours ago
What will be of importance is how the Feds look at electric powered vehicles. Fuel excise is a great earner for the Feds.. Ev... View
Community 10

Anne O'Hara - 13 hours ago
Hannah Zurcher I have no problem with workers going for what they think they are entitled to, I do have a problem with them p... View
Nathan Lofthouse - 14 hours ago
Sorry who else is pulling 4% p.a ? View
Phill kirkham - 17 hours ago
Suez has a contract that commenced in 2013 and expires 2023, worth $180million. They have 5 other contracts worth around $12m... View
Property 46

russianafroman - 15 hours ago
Dukethunder You are not understanding what I am saying. I told you to understand what the heat island effect is. Yet you give... View
News 53

Jordania - 17 hours ago
Sanctimony has nothing to do with objections to Mr Seselja. Indeed, if there is any sanctimony around it is his. His ultra-co... View
News 38

Zoe Walker - 20 hours ago
It has been a very wet season resulting in unprecented growth compared to the last decade. The mix of people staying at home... View
show more show less
*Results are based on activity within last 7 days

Prisoners have painted a depressing picture of life inside Canberra's Alexander Maconochie Centre (AMC), saying current conditions are contributing to...
*Results are based on activity within last 7 days

The Best Driving Ranges in Canberra

@The_RiotACT @The_RiotACT
Hindmarsh has again scaled down its massive Woden towers proposal but it will still be a ''signature'' development https://t.co/l2JOrE6stl (18 minutes ago)

@The_RiotACT @The_RiotACT
Five upgraded playgrounds have been opened in Torrens, Higgins, Waramanga, Richardson and Narrabundah. Check out the improvements https://t.co/mUdw3eK07e (18 minutes ago)

@The_RiotACT @The_RiotACT
Australia should wait until the number of electric cars hit a critical mass before slapping a road tax on them, says Ian Bushnell https://t.co/3e1coFsYjR (3 hours ago)