Like most baked goods, the best vanilla slices are homemade. I grew up eating French vanilla slices made by my Mum’s godfather, and while I’ve yet to taste a version that’s better, a good bakery or patisserie vanilla slice can come pretty close.

We put out the call out for Canberra’s best vanilla slice last week, and those from Dobinsons Bakery Café, Fox and Bow and Flute Bakery each received several nominations, as did those from bakeries all over Canberra and the surrounding region.

Few votes separated the top three nominations, La Sable Patisserie in Mitchell, Café D’Lish in Deakin and Erindale Cakery Bakery, so on Friday morning I recruited some willing friends and family to sample all three. 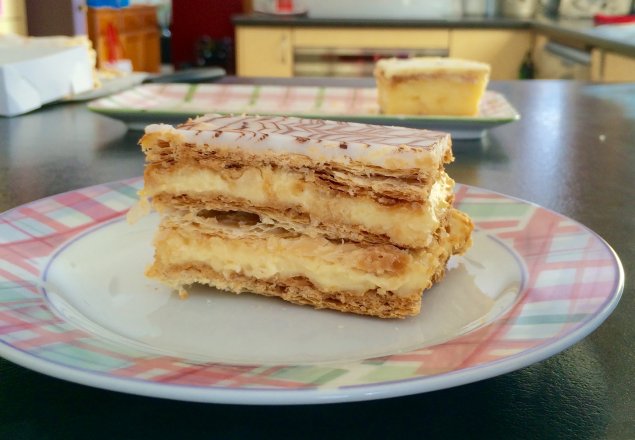 First up was La Sable Patisserie on Lysaght Street in Mitchell. La Sable has only been open for a few months now, but I’d heard good things about the food and was looking forward to my first visit. Its vanilla slice ($5.50) had three layers of crisp and delicate caramel-coloured pastry, and a higher pastry to custard and icing ratio than your average bakery equivalent.

As a patisserie, it’s not really surprising that La Sable’s vanilla slice displayed the most technical skill out of all three options. Very good pastry, very good vanilla custard. If this was a Masterchef taste off, Gary and George would have rated this one highly. 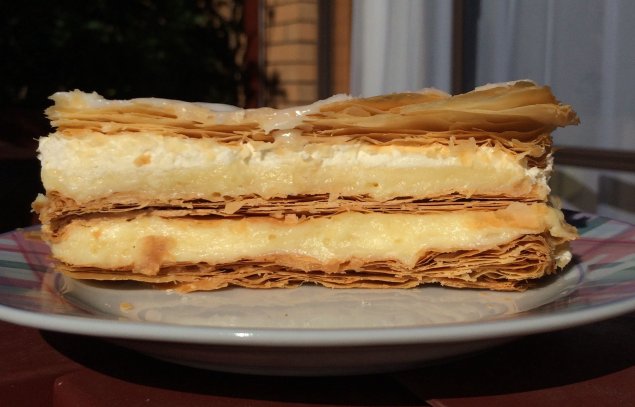 After La Sable, I headed to Café D’Lish and ordered the first vanilla slice out of the kitchen that morning for $4.50. This long, rectangle-shaped vanilla slice had two custard layers and one cream layer, and was made with very flaky pastry that we decided was probably filo.

It took every ounce of self control not to eat the whole thing before dividing among my taste testers, and I can understand why people rave about it. 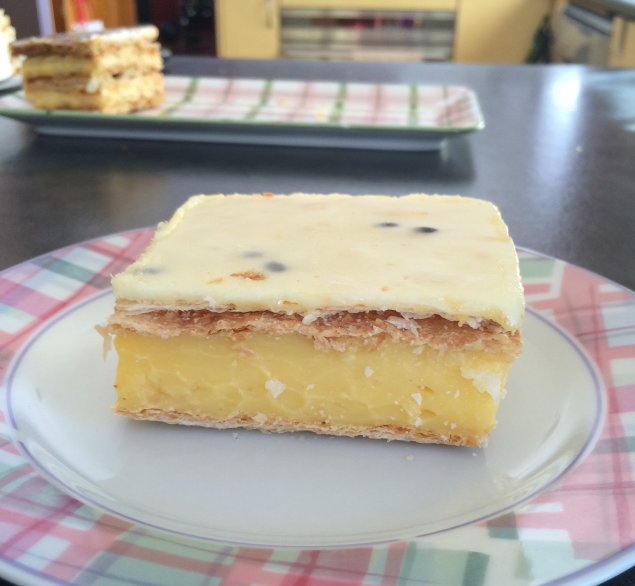 The vanilla slices seem to get cheaper the further south you go, and the classic, passion fruit-iced version at Erindale Cakery Bakery was just $3.80. This one was like a really good version of the vanilla slice you used to buy for morning tea at school, with light pastry that was substantial enough to hold a block of thick (but not gelatinous) and creamy custard. I usually prefer French vanilla slice because I find icing too sweet and overpowering, but this one was subtle. This one was my favourite of the three.

Though all three nominations were strong (Canberrans know a good vanilla slice when they taste one), my taste testers agreed on one winner. My vote for Erindale Cakery Bakery was outnumbered four to one… Cafe D’Lish wins Canberra’s best vanilla slice taste off!

is mildura one of those new suburbs in gunghalin? o, wait…

Its not a philosophical issue or question. Its a simple review of vanilla slices, so dont over complicate it again.

Personally – I think Amy nailed it. For me, bang for your buck goes to Erindale Bakery. Only can be a bit messy to eat – the custard sometimes spurts out the sides when the vanilla slice bitten into. Passionfruit iceing is great. And its large. Yum.

Having also tried both La Sable’s and Café D’Lish’s Mille-feuille (amongst others), I would have to say that Flute is better than both by a considerable margin. I am more than prepared to drive to Fyshwick to by one, you just have to get in quite early as they only make a limited amount. 🙂

Heck, even Cafe Hoz, (yes the one in the hospital) even has a good Mille-feuille.

Hey BombaySapphire, we choose the top nominations based on comments in the call out thread and on our social media channels (this is where it can be difficult to track nominations as a casual observer). Personal preferences and prior coverage aren’t taken into account.

Flute, which I personally think also does a mean vanilla slice, received lots of votes, but not as many as the top three contenders this time around.

A serious question though, how do you get invited to one of these taste testing larks?!

Marisa Navarro - 8 hours ago
Linda Navarro i’ll just keep them! View
Bek Clark - 9 hours ago
Lucinda it depends on the category; and while it was a different specialty I can confirm, private specialist consult with a d... View
Paige Johnson - 9 hours ago
Why though? Shortage of staff/surgeon? I’m genuinely curious to know why. View
Community 3

The best dessert delivery in Canberra

A taste of the Adriatic sea in Weston Creek

Multicultural Eats: the Ambassador’s guide to Croatian food in Canberra

The best high teas in Canberra